Readers who caught the Nov. 18 Old News — about the 1919 Arkansas Gazette Centennial Edition — will recall that the 244-page ads-stravaganza included a never-before-published (back then) essay about the Bowie knife by Col. J.N. Smithee.

Old News mentioned that fact because Smithee was the editor who — before he owned the Gazette — had been Gazette foreman and an editor, had started the Arkansas Democrat and also fought a duel (in 1878) with then-Gazette-owner John Dudley Adams. But also because, Bowie knives! Inquiring minds want to know about Bowie knives.

I figured I would be able to "kill" this space today simply by transcribing what appeared to be about 20 inches of historic writing by the historic Smithee about the historic Arkansas toothpick.

Visitors to Historic Arkansas Museum in downtown Little Rock can see actual Bowie knives. A small room there holds a big exhibit, and it is a "sticky" place in more ways than one: Museumgoers linger. Even unreconstructed peaceniks can find themselves leaning in to study the astonishing worksmanship of some of these knives. The visitor who doesn't devote much neural capacity to knife-ly thoughts, such as Yours Truly, comes away surprised that the generic item "Bowie knife" assumed a variety of shapes and sizes.

Ignorance comes and goes, and then it comes back again. Alas, soon I slip back into my old notion that there was only ever one Bowie knife and its master died at the Alamo, next to Fess Parker or John Wayne. Such willful misunderstanding annoys Bowie knife aficionados, pricking and chafing them until they snatch the quill from the inkstand and dash off a corrective essay to free the nonaficonado trapped in the mire of ignorance.

So I am certain that Knife-Liking Reader would like to read that essay by Colonel Smithee.

Alas, I type these words having just put away the Centennial Edition and slipping off my white gloves, and I have bad, bad, very bad news. Smithee's essay "jumps" onto a second page and from that page onto a third page.

We cannot kill this space so easily as we all had hoped.

And our deadline is here.

Uh-oh, now we are three minutes past deadline, and the end of this space is still more than 6 inches away.

Knife-Liking Reader, I am ever so sorry to have raised our hopes in vain. I promise devoutly to devote a cover space in this Style section sometime soon to a reprint of that essay about the Bowie knife.

Someone, ask me who Colonel Smithee was.

People! Everything you think you know about J.N. Smithee is flat wrong! ... Unless you know something about him, in which case, you're good. But I know from long-ago experience that at least one person has been flat wrong about Smithee, and that person has been me.

Years ago, someone who sat next to me on the copy desk (sometime in the fourth quarter of the 20th century) "explained" that, while the Arkansas Gazette was founded in the wilderness by a New Yorker, William E. Woodruff, the Arkansas Democrat had been founded by a Confederate colonel. A Confederate as in the Confederacy, an entity known for insisting upon retrograde social philosophies.

With only that incomplete fact on hand, years later Yours Truly read about the notorious Smithee-Adams duel in a brochure someplace and assumed the shootout was North vs. South redux, with Democrat editor Smithee for the South and Gazette owner Adams for the Union.

Major Adams was a Confederate, too. In his essential but not always reliable History of the Arkansas Press for a Hundred Years and More, longtime Gazette business manager Frederick Allsopp describes Adams as a "princely planter and steam-boat man." And you don't have to take Allsopp's word for it, you can read it in Fay Hempstead's Historical Review of Arkansas: Its Commerce, Industry and Modern Affairs. But in the late 19th century, most everybody associated with newspapers in Little Rock had been Confederate colonels or majors or were raised by Southern sympathizers.

Adams' son sold his share of the Gazette to Smithee in 1896.

If you're a fan of Confederate monuments, you'll be fascinated to know that Smithee's Gazette, assisted by editor George R. Brown, in 1897 led the fundraising drive for the one erected on the grounds of the state Capitol in 1905.

What was the man like? Opinionated and confrontational, according to historian Tom Dillard, who has compared him to another conflict-causing Arkansas editor, John Robert Starr.

In Twenty Years in a Newspaper Office, Allsopp writes about Smithee's kind heart and generous nature, citing efforts he made to better the lot of the newspaper printers, annual gifts of fat turkeys to every married man on the staff, a banquet for the newsboys and Christmas movie passes. One time, Allsopp writes, Smithee gave black children gold medals for saving some white kids who were drowning.

Allsopp includes a memory of seeing Smithee and his lifelong friend Sen. Augustus H. Garland, two corpulent men, riding on a plank seat in a rustic wagon drawn by two mules and driven by a black child.

"The men were dressed in the commonest kind of country garb, without collar, cuffs, or suspenders, and you would have thought, if you did not know them, that they were bushwhackers, or hedgers, or ditchers." They'd had a jolly time at Garland's country retreat, Hominy Hill, a place "hidden in the recesses of the wood so well that it was said that few people could find it at all."

Garland died in 1899. The newspaper was not making money, and Smithee resigned that same year. He worked up a manuscript but couldn't get it published. Allsopp describes it: "It contained some very good material and some fine writing, but was not put together in such style as to be called a novel, history or biography, but a sort of a literary conglomeration."

Smithee left for Colorado where he failed in some mining business. Returning to Little Rock in 1902, he took up residence in the Merchants Hotel at 24th and Louisiana streets. "He was often seen by his friends, joked and spun yarns with them and seemed to be in the best of health and spirits," Allsopp writes, "but he probably indulged in liquor too freely."

July 5, 1902, he killed himself, to the expressed dismay of many. Allsopp offers a poem suggesting the pity people expressed for Smithee was not their opinion while he lived.

We are two hours after deadline and this column is too long, Patient Reader. Bad, bad news.

Stab me with your incisive wit here: 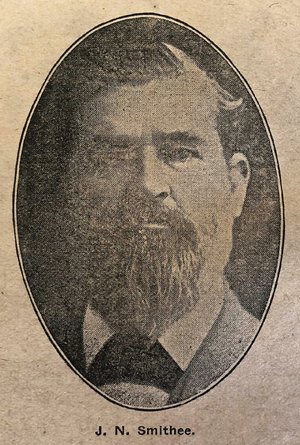 CORRECTION: J.N. Smithee’s Arkansas Gazette raised funds for the Confederate memorial at the state Capitol in 1897. An earlier version of this story had the wrong century.

Print Headline: OLD NEWS: Time is short, and the news is bad