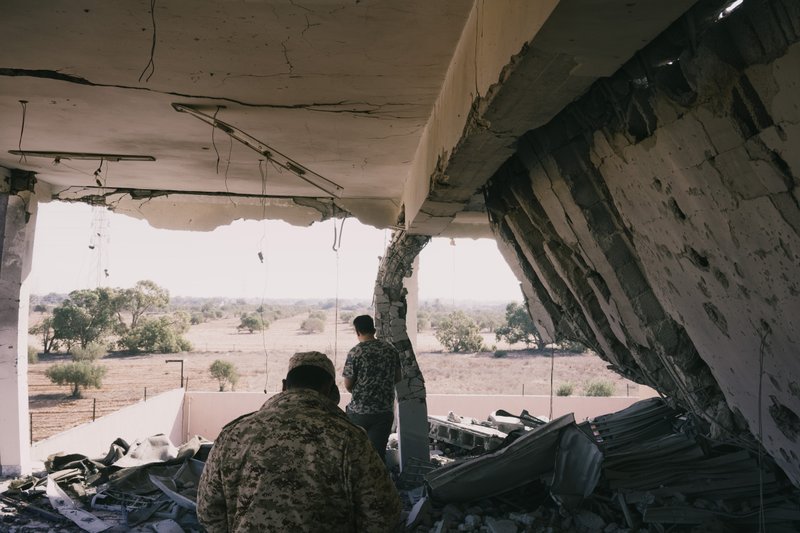 Two members of a militia backed by the Libyan government inspect damage in a building that was the center of military coordination during the offensive to liberate Sirte from Islamic State militants in 2016. MUST CREDIT: Photo for The Washington Post by Lorenzo Tugnoli

Other militants have set up desert camps to the south, where the Islamic State reportedly hides fighters and weaponry, as Libyan militias that once worked closely with U.S. counterterrorism forces on the ground no longer patrol the area.

These are signs of how the expanding civil war in Libya has created a potential opening for the Islamic State to revive itself in the country, according to Libyan commanders and Western officials.

Today, the militias that targeted the Islamic State are themselves targets of airstrikes by the forces of eastern warlord Khalifa Hifter, who is seeking to oust the United Nations-installed government. The small contingent of U.S. troops that coordinated with the militias left Libya months ago.

"We used to have eyes in the south," said Brig Gen. Nas Abdullah, the top military commander in Sirte. "Now we can't go out there. The planes will bomb us."

Since Hifter launched his offensive on the capital of Tripoli in April, the militants have staged nine attacks, mostly in the south, said U.S. military officials. These included one that killed nine people in the city of Sabha and another that targeted an oil field, killing three. In June, the Islamic State claimed responsibility for two bombings that injured 18 people in the eastern city of Derna, the group's first attack in the city since 2016.

Those attacks triggered four U.S. drone strikes in September, targeting Islamic State positions in the southern desert. The airstrikes marked a resumption of attacks on the Islamic State after a 10-month pause.

The official, as well as others interviewed, cautioned that the Islamic State branch remains capable of taking advantage of the current power vacuum.

After the death of Islamic State leader Abu Bakr al-Baghdadi in a U.S. military strike in Syria last month, even more attention has turned to the status of the group's affiliates around the world.

Now, three-quarters of the Libyan militias that defeated the Islamic State here are fighting on Tripoli's front lines, taking valuable resources away from the counterterrorism fight.

"Nobody is saying or doing anything," said Gen. Mohammed Haddad, a senior pro-government commander, referring to the international community. "Are we not on the right side? We fought [the Islamic State] in Sirte. Now, Hifter is targeting us."

Information for this article was contributed by Missy Ryan of The Washington Post.