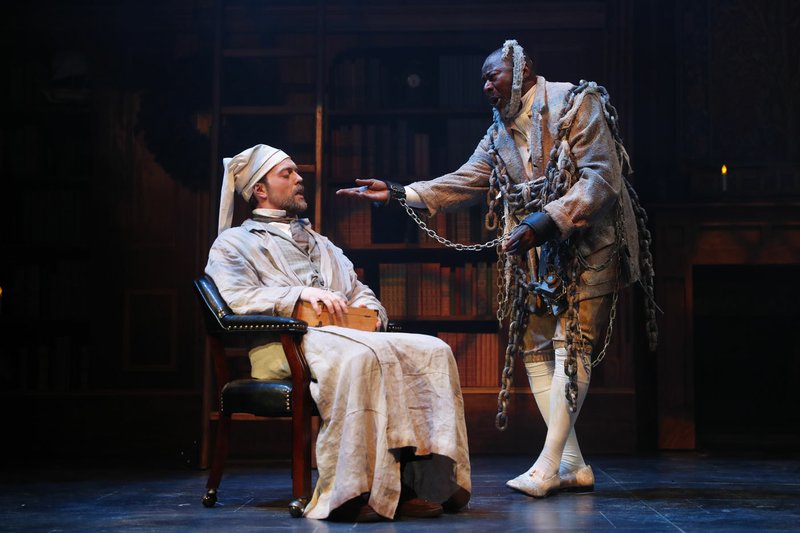 Photo Courtesy Wesley Hitt "'A Christmas Carol,' of course, is running with wonderful social themes that we can all stand to be reminded of," says T2 founder Bob Ford. "We know that a lot of families are reconnoitering and are looking for theater that they can all go to together, so we look for something that's really redemptive, something that expresses something important that we all share about being human." James Taylor Odom is Ebenezer Scrooge and James Bowen is Jacob Marley in the T2 production.

When you see "A Christmas Carol" at TheatreSquared -- notice I said "when," not "if," because you must see it -- be there when they open the doors into the theater. You'll need every moment before the curtain "rises" to marvel at the set, which is the single most gorgeous scenic design I have ever seen. (Yes, I have seen "Phantom of the Opera" and "Beauty and the Beast." Yes, it is still my favorite.)

As writer Lara Hightower reported in What's Up!: The richly appointed library, created by scenic designer Martin Andrew, has a second floor that's accessed by an iron spiral staircase. T2 Director of Marketing Joanna Sheehan Bell says that there are somewhere around 1,600 books lining the shelves, created when T2's scenic design staff went through a painstaking process of printing era-appropriate book spines with deep jewel tones onto canvas, then gluing them on to book-shaped Styrofoam blocks.

There are also six or seven entrances -- a couple of which are completely surprising -- gorgeous "candlelight" and "lantern light" and furniture used in myriad, surprising ways you cannot even imagine.

And that's before you ever get to the story -- which is simply marvelous.

I hinted the other day on "Ozarks at Large" on KUAF that if you wanted a clue about the story, you could find one in "The Neverending Story." In this new adaptation by Bob Ford and Amy Herzberg, two of the founders of TheatreSquared, "A Christmas Carol" is a brand new book, just written by Charles Dickens. And it's brought to life by a librarian who is unexpectedly the keeper of a little boy who doesn't seem to have anywhere to go on Christmas Eve. Eventually, they both become part of the story themselves, and along the way, they learn some things about themselves, each other and life -- of course.

"Marley was dead, to begin with. There is no doubt whatever about that. The register of his burial was signed by the clergyman, the clerk, the undertaker, and the chief mourner. Scrooge signed it. And Scrooge's name was good upon 'Change for anything he chose to put his hand to. Old Marley was as dead as a doornail."

Imagine someone hearing those words for the first time. Imagine someone reading those words for the first time. That's where this "Christmas Carol" begins with the beautiful voice of Chicago-based actress Jeri Marshall starting to read to the abandoned boy, Beck Crabb. Enter Scrooge, boisterously played by James Taylor Odom, then Bob Crachit (Trent Anders Dahlin) and Scrooge's nephew Fred (Josh Jeffers), the two gentlemen seeking donations -- "Are there no prisons? Are there no poor houses?" -- and finally, Jacob Marley himself, wrapped in chains and brought piteously to life by James Bowen. (Watch for the knocker on Scrooge's door! This show is all about the details.)

The cast also includes old friends of Northwest Arkansas like Betsy Crouch Jilka and Bryce Kemph among an ensemble that plays a wealth of roles beautifully. And the first two ghosts are unexpected and delightful.

I say two because I didn't get to meet the Ghost of Christmas Yet to Come, although I assume there must be one. My favorite theater date, my daughter Amanda, didn't make it through this one. I forget sometimes that she is developmentally delayed, and some days, she just can't settle, sit still and be quiet. Sunday was one of those days. She was fully engaged in the show, but her running commentary of happy noises to herself wasn't fair to other audience members, so we slipped out. That being said, I would go back a dozen times to look for the details, the nuances and the surprises in this delightful story.

I wonder if there's a nook in the set where I could put up a cot and no one would notice?