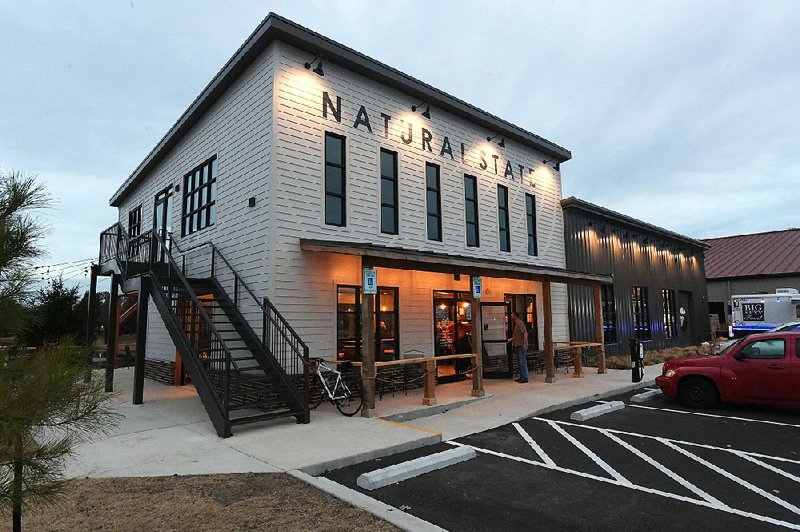 Natural State Beer Co. opened Saturday in the Village on the Creeks area in Rogers.

ROGERS -- Natural State Beer Co. has opened its doors and is bringing craft beer served in a trendy taproom to the Village on the Creeks area.

Natural State Beer officially opened on Saturday and is situated adjacent to the Razorback Greenway at 5214 W. Village Parkway, with its patio literally two strides from the trail. The company plans to sell its beer almost exclusively at the taproom with some selected keg distributions expected in 2020, and has no plans to enter the retail distribution market at this time.

Co-founder Mark Smith said he's been home-brewing since 2003 and notes that nearly every home brewer dreams of someday opening his own craft operation. He said after several false starts, he met his business partner Dan Clous and things just clicked. With an additional silent partner added to the mix, Natural State Beer was on its way.

"The benefit of the taproom-only strategy is that you control your own taps and so have immediate access to market," Watson said in response to emailed questions. "It's also popular with beer lovers -- people like the experience of drinking fresh, quality beer where it was made."

He said the taproom-only models face the challenges tied to any small service business, such as finding employees and having a good location and it can leave little room for expansion.

Sylvia Blain, executive director of the Arkansas Brewers Guild, said in Arkansas the taproom-only model is the norm for startup breweries, with distribution typically coming later, if at all.

There currently are 72 breweries operating in Arkansas, with 46 operating under small brewery permits and 26 with microbrewery restaurant permits.

According to data released earlier this year by the Arkansas Department of Finance and Administration's Alcoholic Beverage Control Division, Arkansas' craft brewers produced nearly 37,500 barrels of beer in 2018, up less than 1% from a year earlier. A barrel contains 31 gallons of beer.

Natural State Beer operates with a seven-barrel system that brews all the taproom's beer on site. The brewery will focus on European lagers which typically take significantly more time to produce.

The brewery will be able to brew up to 500 barrels a year.

"But they're tasty and refreshing and you don't feel full after you've had a pint or two," Smith said.

The Beer Association's Watson said lagers still dominate the beer market, but haven't been able to challenge the dominance of ales in craft brewing.

"That said, we have seen more craft brewers moving into lagers, particularly as growth has slowed and they have capacity available," he said.

The Natural State taproom seats 50 at its custom-made tables. With the addition of its heated patio, Natural State Beer can serve up to 80 customers at capacity. The taproom will offer table service and will make available four packs of 16 ounce cans to carry out, rather than offer typical growlers.

That taproom experience, with its sense of belonging, is what Smith says his customers will remember and love when they visit Natural State Beer. That and the view, and the beer.

"We'll make sure the consumer gets that great experience," he said. 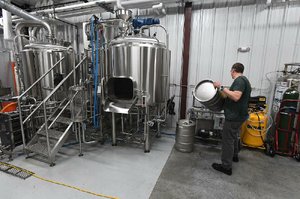