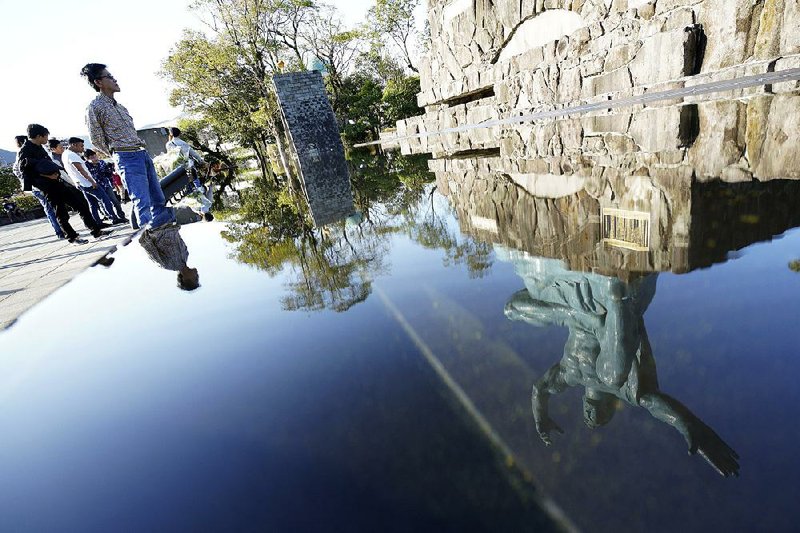 In Nagasaki, Japan, the Statue of Peace is reflected on a water fountain at Peace Park. Pope Francis will start his first official visit to the country with a visit to the southern Japanese city today.

NAGASAKI, Japan -- It's fitting that Pope Francis will start his first official visit to Japan in Nagasaki, the city where Christianity first took hold in the country and where nearly 500 years later it remains steeped in symbolism, both religious and political.

It was here that a small group of Catholic converts went underground during centuries of violent persecution. It was here that their descendants emerged from hiding in the 19th century, their faith unbroken. And it was here that a U.S. atom bomb brought death and destruction to the cathedral that community was finally able to build.

As Francis makes the first papal visit to Japan in 38 years, he will likely look to the past by honoring the doggedness of those so-called Hidden Christians, while also laying out his vision for a future free from the threat of nuclear weapons.

In many ways, Nagasaki is the perfect backdrop for his visit to a nation that was once coveted by the West as a place of Catholic expansion but where only 0.35% of the 127 million people are Catholic. One of the highlights of the visit starting today will be his prayer at a memorial to 26 martyrs crucified in 1597 at the start of anti-Christian persecution that lasted until about 1870.

"Our Christian ancestors were oppressed and monitored, and then suffered from the atomic attack. This all made me think, 'What is it supposed to mean?'" Japanese Archbishop Joseph Mitsuaki Takami said. "Perhaps the followers in Nagasaki have been given a mission to convey peace."

Takami, who heads Nagasaki's Catholic community of 60,000, by far the biggest in Japan, is a Hidden Christian descendant who was exposed to radiation in his mother's womb when the atom bomb fell on Aug. 9, 1945, near Urakami Cathedral. He had several relatives die in the bombing that killed 74,000, a number that includes two priests and 24 followers inside the cathedral.

Takami, who has traveled the world with a statue of the Virgin Mary that was damaged in the blast, and other activists expect the pope will send a powerful anti-nuclear message on behalf of everyone in Nagasaki.

Many bomb survivors and supporters hope it will push Japan's government, which is protected by the U.S. nuclear umbrella, to sign the U.N. nuclear-ban treaty. Japan has refused to sign, saying it seeks to bridge the gap between nuclear and non-nuclear states.

Francis has gone further than other popes on the nuclear matter, saying that not only the use but the mere possession of nuclear weapons is "to be firmly condemned."

Francis is set to visit Nagasaki and Hiroshima, where 140,000 were killed by another U.S. atomic bomb. He will meet with survivors of those bombs, as well as those affected by the Fukushima nuclear disaster that followed a March 2011 tsunami and earthquake in northern Japan.

"Your country knows well the suffering caused by war," Francis said in a video message to the Japanese on the eve of his trip. "Along with you, I pray that the destructive power of nuclear weapons never is let loose again on human history. The use of nuclear weapons is immoral."

Takami, 73, grew up hearing stories from his relatives of the suffering that many in Nagasaki endured after the bombing and is reminded of his determination for peace every time he visits Urakami Cathedral.

Many in Nagasaki are happy that the pope is coming first to their city, which is often eclipsed by the events in Hiroshima.

"I hope he will use his trip to Nagasaki to send a powerful message of the need to ban nuclear weapons," said Chizuko Maruo, the daughter of an atomic bombing survivor who will attend the pope's Sunday Mass at a city baseball stadium.

Francis will also greet some descendants of the Hidden Christians, who developed their own unique prayer known as the "Orasho," or oratio, while hiding in Nagasaki's northern islands, where some local Shinto and Buddhist residents supported them.

Francis, who is known to Japanese Catholics as Papa-sama, will also hold a Mass in Hiroshima and in Tokyo and meet with Japan's emperor and prime minister.

Francis' messages about life are universal and still can reach people's hearts, especially given the state of global politics, said Kagefumi Ueno, a former Japanese ambassador to the Vatican.

"At a time when global leaders are increasingly becoming populist, the pope's words can be a virtue of the international community and a moral authority," he said.

As a youth Francis is said to have been fascinated by the history of the Christian experience in Nagasaki and wanted to be a missionary there.

The area around Nagasaki became the center of rapid Catholic expansion after the 1549 arrival to Japan of St. Francis Xavier, the first Jesuit missionary. More than a quarter-million Japanese are said to have converted until the Tokugawa shogunate, fearing that Christianity was the beginning of Western domination, outlawed it in 1612.

Christians were forced to renounce their beliefs on pain of death and to trample on Catholic icons. When discovered, Christians were tortured. Many were thrown into boiling hot springs or burned to death.

A small, determined Catholic minority went into hiding and practiced their faith in secret for more than 250 years. The Hidden Christians finally broke their silence in 1865 by approaching a foreign priest. But with the ban on Christianity still in place, the 3,300 Catholics were banished from Nagasaki and were not allowed to return until the ban was lifted in 1873. They built their long-dreamed-of cathedral in 1914.

Mitsuho Nakata, an artisan who makes Catholic statues near Urakami, is the great-grandson of a samurai who cut ties with his feudal lord to pursue his Catholic faith. A group of samurai ambushed and killed most of his great-grandfather's family.

After studying at a Catholic theological school, Nakata returned to work in the family-run workshop his father started.

"My family is here only because our ancestors kept their faith despite constant fear of getting killed or tortured," Nakata said at his workshop, surrounded by dozens of statues of the Virgin Mary and saints. "I'm so impressed by their devotion and their strong faith and that they abandoned everything they had for it." 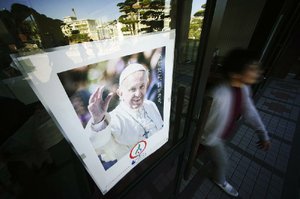 Photo by AP/EUGENE HOSHIKO
A woman walks by a poster of Pope Francis at the Urakami Cathedral. 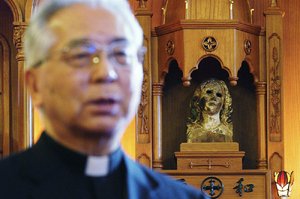 Photo by AP/EUGENE HOSHIKO
Japanese Archbishop Joseph Mitsuaki Takami, who heads Nagasaki’s Catholic community of 60,000, the biggest in Japan, speaks at the Urakami Cathedral in front of a statue of the Virgin Mary that was damaged in the A-bomb attack. 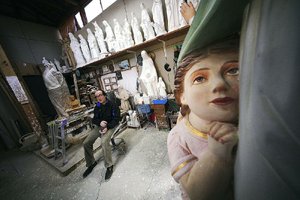 Photo by AP/EUGENE HOSHIKO
Mitsuho Nakata, a Catholic statue artist, speaks during an interview at his workshop near the Urakami Cathedral in Nagasaki, southern Japan. 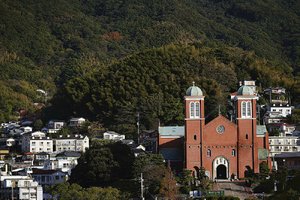 Photo by AP/EUGENE HOSHIKO
The Urakami Cathedral is seen in Nagasaki, southern Japan. Pope Francis will start his first official visit to Japan today in Nagasaki, ground zero for the Christian experience in a nation where the Catholic leader once dreamed of living as a missionary. 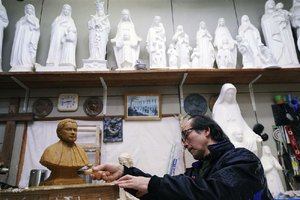 Photo by AP/EUGENE HOSHIKO
Mitsuho Nakata, a Catholic statue artist, works at his workshop near the cathedral.