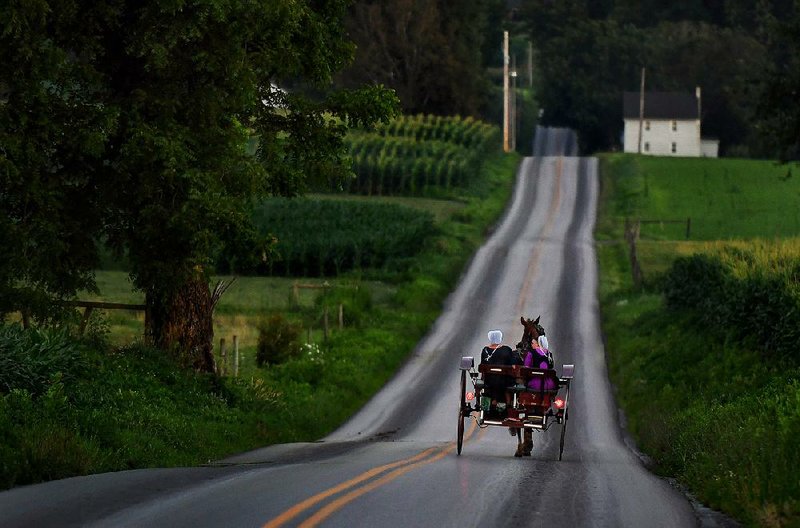 A horse-drawn buggy travels a country road in Lancaster County, Pa., in 2017.

ELIMSPORT, Pa. -- Amish families' buggies have long traveled the gently rolling roads of White Deer Valley, a bucolic part of Pennsylvania north of Harrisburg. But lately, they haven't been quite as welcomed. The problem is what the horses pulling them leave behind.

Not just roads damaged by horseshoes, but roads slickened by horse manure, too.

Tensions flared for months after Washington Township supervisors proposed requiring the horses to wear rubber shoes and "diapers" to collect their droppings. A sign that briefly stood at Elimsport's main junction set the tone: "Let's take our township back!"

By coincidence, horses were also at the center of friction 100 miles away in Lancaster County -- the heart of Pennsylvania Dutch country, with the nation's largest concentration of Amish and Mennonites, as well as burgeoning suburban development. Some Amish who do not farm or who have retired from it have been moving into the more traditional suburban houses. But because they still need their horses to go to church and market, they have been converting garages to barns.

This summer, an Amish man's requested zoning variance to accommodate two horses on a one-acre lot touched off a wave of anger among some neighbors. They voiced safety and public health concerns -- runaway animals, odors, waste disposal.

The two cases highlight the growing unease in communities that have coexisted relatively peacefully in the past. They also raise other issues, of potential religious discrimination or religious favoritism.

"It's part of a pattern we've seen historically since the mid-20th century, of high-profile conflict over schooling, military draft and Social Security," said Steve Nolt, a senior scholar at Pennsylvania's Elizabethtown College who has written extensively on the Amish. "But the conflicts you see now are with local governments, not the state."

For the "Plain Sect," horses are more than just a means of transportation. They represent a traditional way of life -- and a commitment to maintaining it.

"The horse and buggy slows down the pace of life, reduces autonomy and sets up a symbolic separation that 'we are socialized to who we are,'" Nolt said.

In Lancaster County, the requested variance was to allow construction of a new barn despite the lot size. The attorney for one opponent warned East Hempfield Township that the narrow justification given, "horse barn for transportation," would ostensibly apply only to the Amish and Mennonites and so would favor one group of religious observers over others.

Supervisors addressed the complaints last month by amending an existing ordinance to prohibit horses on smaller lots in residential districts. That means the proposed barn can be built because it will go up in an agricultural district.

The issues in rural Washington Township, population 1,900, remain unresolved. Some people worry they could end up in court.

Levi Stoltzfus, whose parents were among the original settlers in this Amish outpost in the 1970s, eased his horse onto the pavement of Mill Road on a recent morning jaunt. He has generally shrugged off the angry rhetoric. Yet like other Amish, he is prepared to fight to protect his right to travel without conditions.

The proposed requirements are untenable, in his view. Rubber horseshoes could cause lameness, he said, and horse diapers are hazards that simply don't work.

"I just don't see room for compromise," said the 45-year-old Stoltzfus, who operates a sawmill.

The Rev. Michael Hill of Elimsport United Methodist Church considers the standoff part of a larger problem over cultural differences between a dwindling non-Amish community and a growing number of more recent Amish settlers.

"I see it as an age-old thing -- where two cultures are occupying the same space, you are going to have problems over standards and beliefs," Hill said, who has lived here 12 years. "Everybody is taking sides. You're either for the Amish, or you're not."

Economic concerns lie just below the surface. While newcomers who buy and fix up old farms have helped the township, their presence has also driven up land costs, often beyond the reach of non-Amish -- the "English," as Amish call them.

"No English families are settling here, and young people who go off to college have nothing to come back to," Hill said. The local elementary school, which closed in 2012, is now an Amish-run farm and hardware store. Hill's church, which dates to 1838, has a shrinking congregation. "This has a ripple effect."

For now, the proposed ordinances are tabled. Township supervisors formed a committee that includes the Amish to discuss ways to reduce road damage and excess manure from the buggies. A sticking point for some people: Who pays for road maintenance? A portion of the revenue for that comes from gasoline taxes, which the Amish largely avoid because they don't drive motorized vehicles.

"We're trying to work through the issues," said township solicitor Douglas Engelman, with the township seeking a resolution before the year ends. "We are trying to come up with a solution to satisfy everyone and allow us to move on."

Clifford Rieders, an attorney representing a group of Amish, hopes the situation can be resolved without a lawsuit but said he is confident they would win. The restrictions "would be recognized as an infringement of their religious rights," he said.

The valley retains its postcard-perfect images of one-room schoolhouses and pastures dotted with dairy cows.

Hill suggested regular conversations between the two sides to address differences that are deeper than horse droppings. "What can we do to make this a better community?" the pastor asked. "The two sides should work together to find solutions."