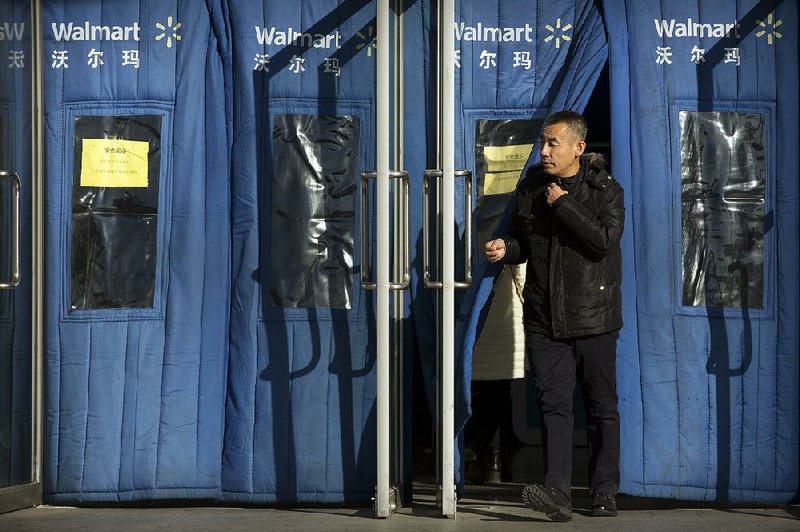 A shopper exits a Walmart store in Beijing in 2017. The retailer said Thursday that it plans to build 500 stores and distribution centers for its hypermarkets, supercenters and Sam’s Clubs over the next five to seven years.

Despite the ongoing trade war between the U.S. and China, Walmart Inc.'s Chinese unit said Thursday that it plans to build 500 stores and urban distribution hubs for its hypermarkets, supercenters and Sam's Clubs over the next five to seven years.

Walmart China also said that it will remodel more than 200 facilities in the next few years.

The distribution hubs, called "cloud depots," are mini warehouses set up throughout cities to allow for faster delivery of online orders, a Walmart spokeswoman said. As an example, she said the retailer typically builds four or five cloud depots in the community around each Sam's Club in China.

A summary of a Walmart China news release provided to the Arkansas Democrat-Gazette by the spokeswoman did not state how much money the Bentonville retailer will invest in these new and remodeled stores. "No specific dollar amount [is] publicly associated with the plan at this time," the spokeswoman said.

James Ku, Walmart's senior vice president of China realty, said in the summary that in addition to the new stores and depots, the company "will continue to collaborate with partners and policymakers in China to accelerate our expansion, introduce new innovations, and advance our omnichannel services."

Walmart China also plans some changes to its existing stores, including localized fresh-food offerings and more private-label brands. And while its supercenters are already "geared toward next-generation interactive experiences for shoppers," the company said, its hypermarkets and Sam's Clubs will be increasingly equipped with similar technologies. New features will include self-checkout machines with facial-recognition payment and in-store "smart" screens customers can use to get information about products.

China remains one of the retailer's strongest international markets. In last week's earnings report, Walmart's chief financial officer, Brett Biggs, said the unit's third-quarter sales results were the best in more than five years, with net sales up 6.3% from the previous year and same-store sales up 3.7%.

Sam's Club was the primary driver of of those results, Biggs said, with strong sales in fresh foods and growth in omnichannel services.

"Customers appreciate having multiple options to shop Walmart, so we're continuing to lean into omnichannel capabilities," Biggs said. These include the rollout of Walmart Daojia and the expansion of JD Daojia, online platforms that support delivery of orders placed online to customers' homes.

Walmart, which entered the Chinese market in 1996, had 433 stores in that country as of Oct. 31. Situated in more than 180 cities, most are supercenters, along with 26 Sam's Club stores and eight Neighborhood Markets. Walmart China also has more than 20 warehouses, and employs more than 100,000.

Walmart said in July that it will spend $1.2 billion over the next 10 to 20 years to upgrade its logistics network in China. This includes building or renovating at least 10 distribution centers. Ryan McDaniel, senior vice president of Walmart China supply chain, said at the time that Walmart is making the investment to support its omnichannel development and improve service.

Much of Walmart's investment in China over the past few years has focused on increasing its online presence as it battles digital shopping mall Alibaba, which owns China's second-largest food-delivery service and has a growing interest in groceries and household items.

Although Walmart sold its unprofitable e-commerce business in China to JD.com in 2016, it paid $50 million that year for a 12% stake in the Chinese e-commerce giant to continue selling online.