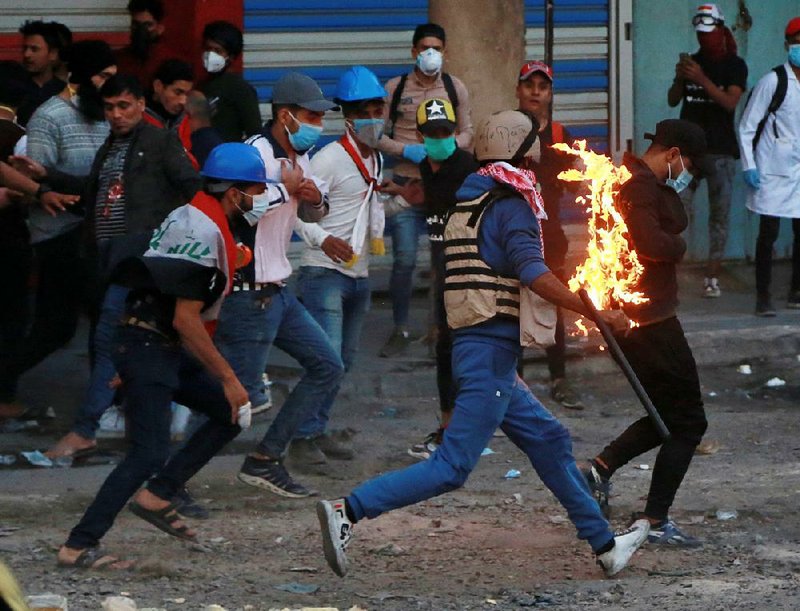 Demonstrators work Thursday to extinguish a protester who was set on fire during clashes between Iraqi security forces and anti-government protesters in Baghdad. More photos are available at arkansasonline.com/1122protests/

BAGHDAD -- Four people died and 90 were wounded in renewed clashes in central Baghdad between anti-government demonstrators and security forces, raising the death toll for the day to eight, Iraqi security and hospital officials said Thursday.

The clashes, the deadliest in recent days, broke out on the capital's Rasheed Street, a cultural center known for its old crumbling buildings. Security forces fired live ammunition, tear gas and sound bombs to disperse dozens of protesters.

The officials spoke on condition of anonymity in line with regulations.

Two protesters were killed when tear gas canisters struck them and one was killed by live ammunition. The clashes took place on the street near Ahrar Bridge, the officials say.

Late Thursday, one person was killed when security forces hurled sound bombs at protesters on the Sinak Bridge, security and hospital officials said.

Protesters have been occupying parts of Baghdad's three main bridges -- Sinak, Ahrar and Jumurhiya -- leading to the heavily fortified Green Zone, the seat of Iraq's government.

Fighting also resumed overnight in the Shiite holy city of Karbala, south of Baghdad, between protesters and security forces.

Tents have been set up under the bridges and also on central Tahrir Square, the epicenter of the protest movement, where first-aid volunteers treat those wounded by pieces of exploded tear gas canisters and live fire.

"Around 1:30 a.m., the shooting started with live ammunition, tear gas and sound grenades," said one volunteer, speaking on condition of anonymity for fear of government reprisal.

In Karbala, the protesters threw crudely made firebombs at security forces while anti-riot police responded by throwing stones at the protesters.

At least 320 protesters have been killed and thousands have been wounded since the unrest began Oct. 1, when demonstrators took to the streets in Baghdad and across Iraq's mainly Shiite south to decry rampant government corruption and lack of basic services despite Iraq's oil wealth.

The leaderless movement seeks to dismantle the sectarian system and unseat the government, including Prime Minister Adil Abdul-Mahdi.

Print Headline: Day's death toll at 8 for protesters in Iraq