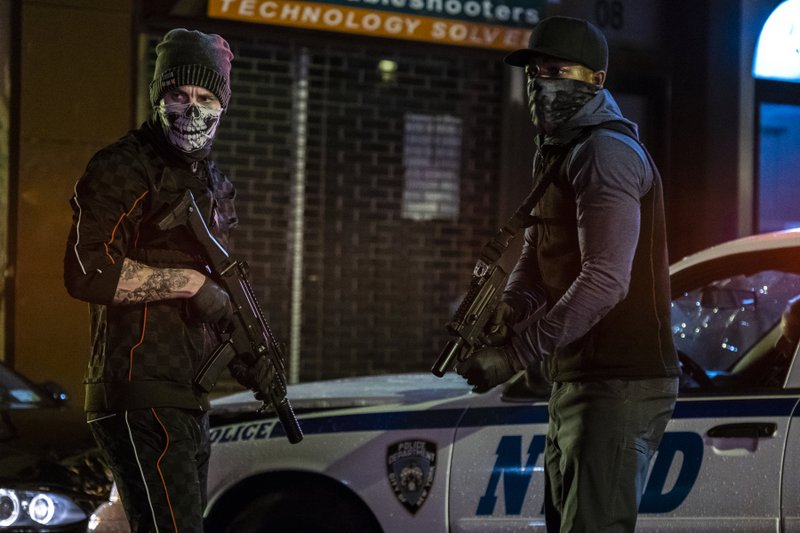 Ray (Taylor Kitsch) and Michael (Stephan James) are small-time thieves who stumble on a cache of cocaine and ruthlessly shoot their way out, necessitating a massive manhunt in Brian Kirk’s 21 Bridges.

Unlikely, far-fetched and downright preposterous events duke it out for bragging rights in 21 Bridges, 104 minutes of nocturnal big-city crime action that's amped up to a borderline ridiculous level of nearly uninterrupted violence.

The story suggests something that Michael Mann might have done in the 1990s, but he would have included a lot more than just showing good guys and bad guys careening around Manhattan. Of course, there's a reliable audience for relentless mayhem and the presence at the top of the ticket of Black Panther himself, Chadwick Boseman, assures an automatic audience. Still, it's depressing to ponder why the actor-producer would choose to make this sort of cookie-cutter commercial drivel when he could do something more challenging and meaningful in between Marvel assignments.

Rating: R, for violence and language throughout

The only backstory offered up is that New York police detective Andre Davis' policeman father was killed on the job when his son was 13. Nineteen years later, Andre (Boseman) is a top cop, serious, authoritative and, as we shall soon see, relentless. His mother is in a care facility with dementia, but she's still able to advise her son, "You gotta look the devil in the eye."

If he's able to do that, Andre can no doubt do the same with the big city's criminal element, which gets busy just after midnight one night when two nasty guys turn up at a fancy Brooklyn eatery and violently help themselves to a very large stash of uncut coke, which is stored in the restaurant even though it's not on the menu. Stylishly brutal mayhem ensues, as the thugs, played by Stephen James and Taylor Kitsch, the latter a total psycho, recklessly head off into the night while the police deal with the dead and detritus left behind. It doesn't take long for the perps to be ID'd on TV.

That's the simple setup for a very long night of overtime for Andre and narcotics detective Frankie Burns (Sienna Miller). As with Andre and his dead dad, she is allotted one identifying character trait, which is that she's a single mom. Pursuing their prey into Manhattan (after this film there will be no excuse not to know how many bridges connect the island with the rest of the world), Andre figures that the coke will be sold off within three or four hours and convinces his bosses to close off all bridges and subway tunnels. "Then we flood the island with blue," but only until 5 a.m.

At this point, 21 Bridges becomes a pumped-up beat-the-clock thriller with the cops hunting down the nasties through the naked city that never sleeps (well, all-night subway drivers can at least catch a nap). The pursuit is spiked by a number of violent confrontations and altercations, and you can't say that British director Brian Kirk, whose résumé includes a lot of high-end television such as Luther, Game of Thrones, Boardwalk Empire and Penny Dreadful, isn't up to the occasion of staging impactful heavy artillery shootouts and close-quarters fights.

But the script by Adam Mervis and Matthew Michael Carnahan does feel tiresomely by-the-numbers, with dialogue notable only for its street-dumb vulgarities and a structure built to guarantee moments of brutal violence and desperate action every few minutes. The film's latter stages steer off to stress a cynical sense of endemic corruption throughout the entire police force, placing a sort of "Last Good Cop" halo over Andre's head while a seen-it-all police captain (J.K. Simmons) delivers the sadly cynical lowdown on the way of the world.

The ever-righteous profile maintained by Boseman's detective gets to be a bit limiting after a while; if anything was going to have multiple dimensions in this pic, it should have been him. But the script is instead built around the goal of providing maximum movement and hoped-for tension. It's got the former but only sporadically achieves the latter.