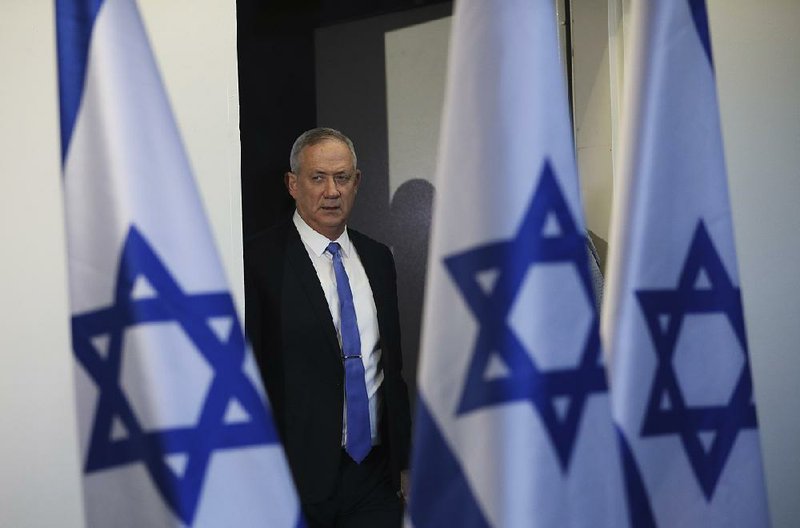 Benny Gantz arrives for a news conference Wednesday in Tel Aviv after he was unable to form a governing coalition.

JERUSALEM -- Benny Gantz, the former army chief, failed in his month-long attempt to put together a governing coalition Wednesday, prolonging Israel's protracted political gridlock and making it likely voters will have to endure a third national election in less than a year.

Gantz, who has rocketed to the top tier of Israeli politics, caused a stir in October when he became the first person other than Prime Minister Benjamin Netanyahu given a chance to form a government in Israel in a decade. Twenty-eight days later, his mandate to try is expiring with no parliamentary majority in sight.

Gantz said in a statement Wednesday that he had informed Israeli President Reuven Rivlin that it was not possible to form a government.

For the next three weeks, the law allows any member of the Knesset, Israel's parliament, a chance to do what both Gantz and Netanyahu could not: cobble together the 61 votes needed to form a government. If this too falls short, as most analysts predict, the country will hold another election, probably in March.

"Israel is caught in a cul-de-sac," said Dan Shapiro, former U.S. ambassador to Israel and research fellow at the Institute for National Security Studies in Tel Aviv. "There just seems to be no workable coalition among the parties as they were elected."

Israel is a country deeply divided. A range of parties split on questions of religion, security and the role of Arabs in Israeli society are wrestling for influence.

At the center is Netanyahu, a polarizing leader who faces likely indictment on corruption charges by the end of the month.

"You have too many crosscutting interests and personalities and a prime minister fighting for survival," Shapiro said.

The breakdown in governance is roiling a country that has prided itself in recent decades on stable, if raucous, leadership. As the months have passed, concern has grown that budgets and planning are beginning to suffer at a time of growing tension in the region.

The Israeli military that Gantz used to lead has been busy in recent weeks, conducting operations against militants in Gaza and Iranian military targets in Syria. But army officials, speaking off the record, say they need a government in place for long-term strategic planning and budgeting.

"Things are running by themselves, without the politicians," said Aviv Bushinsky, a political commentator and former Netanyahu staff member. "That can be both good and bad."

Never before has Israel's parliamentary system had to trigger the coming 21-day free-for-all that allows for any lawmaker to play government builder.

Most say the dynamics that have so far stymied the politicians won't change. As has been the case for months, all eyes will be on the would-be kingmaker Avigdor Liberman, the former hawkish defense minister whose resignation from the government exactly a year ago helped spark the political uncertainty.

On Wednesday, Liberman announced that he would support neither a minority coalition led by Gantz nor a bloc of right-wing, religious parties led by Netanyahu. Both leaders had been trying to entice him into an arrangement, but both options appeared to conflict with his secular, right-wing ideology.

Liberman, head of the Yisrael Beitenu party, has been a wild card since the first election this year in April. Following that vote, he refused to join a Netanyahu-led coalition because of its alignment with religious factions.

Since the September election, Liberman has refused to back either candidate, calling on both Netanyahu and Gantz to bring their parties together in a secular unity government.

Liberman said in his news conference that he would not cooperate with a faction of Arab parties, which he has consistently referred to as a "fifth column."

That rules out the option of Gantz forming a minority government backed from outside the coalition by 13 Arab lawmakers.

Liberman also reiterated his position of not joining a government with Netanyahu and parties representing ultra-Orthodox Jews and a group of Jewish settlers, which Liberman has called "messianic."

Most analysts believe only Gantz or Netanyahu have a chance at getting enough support to prevail. All sides will be under pressure to make deals, as the idea of a third election is unpopular among exhausted voters.

If no deal is reached by Dec. 11, the third campaign will begin.