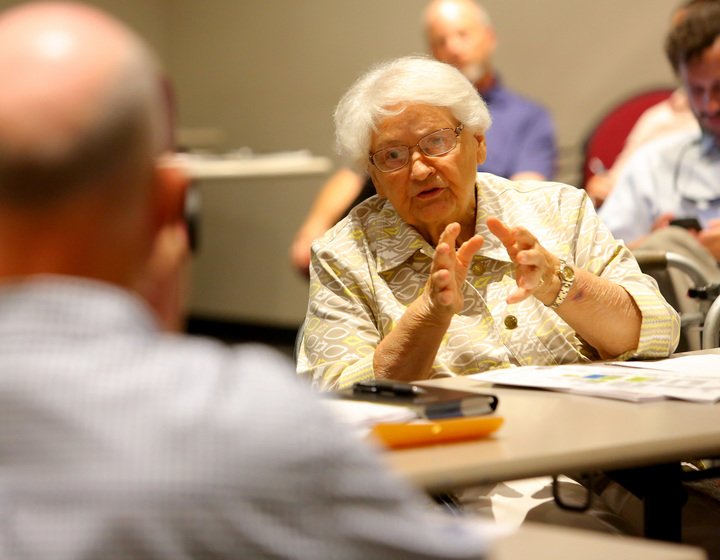 "She was a scientist by training, but she had a humanitarian heart," said Anna Beth Gorman, executive director of the Women's Foundation of Arkansas.

Good died in her sleep at her Little Rock home after being in hospice care, Gorman said. A family member told the foundation about Good's death, Gorman said.

Raised in small-town Arkansas, Good broke barriers with scientific accomplishments that included becoming the first woman to win the top honor in American chemistry, the Priestley Medal, in 1997.

Good, described by colleagues as strong-minded and tenacious, also had a knack for leadership. In the 1990s, she served as undersecretary for technology in the U.S. Commerce Department, an appointment made by then-President Bill Clinton.

By that time, she had already served on national science boards and councils under three U.S. presidents.

The early part of her career took her outside Arkansas, but she returned and in 1999 became dean of a newly created engineering college at the University of Arkansas at Little Rock.

"Mary Good was a brilliant scientist, a devoted public servant, and a world-class human being," Bill Clinton and former Secretary of State Hillary Clinton said in a joint statement.

"Throughout her long and interesting career, she improved our understanding of the world around us and advanced the STEM fields in Arkansas and across America, including as Founding Dean of the UALR College of Engineering and Information Technology," the statement said.

The former Arkansas governor and first lady also are "grateful for her family's decades of genuine friendship," the statement said.

Peers elected Good as president of the American Association for the Advancement of Science.

"She had a remarkable ability to bring people to consensus. At the same time, she was often the person to propose solutions to policy problems," said Alan Leshner, the association's interim chief executive officer.

Jerry Adams, president and chief executive officer for the Arkansas Research Alliance, said UALR's engineering college thrived "because she was just tenacious" in recruitment and in building up the program.

In Little Rock, Good also served as the first chairman of the Little Rock Technology Park Authority Board, which dealt with contentious issues regarding its site location.

Adams, describing Good's leadership style, said it was "very 'Mary Good' to work through a complicated issue to attempt to come out to a much better place."

After retirement from UALR in 2011, Good stayed active and involved. She met with the current UALR engineering dean, Lawrence Whitman.

"The two key words I can think of for her are 'vision' and 'caring.' There's a lot of people with good vision, but you don't think they give a rip about you," said Whitman.

With Good, "she was a great mentor to many and, in her own way, a mentor to me," Whitman said.

Born in Grapevine, Texas, Good came to Arkansas as a child when her parents moved so that her father, John Lowe, could take a job as a school principal. Her mother, Winnie, was a teacher and librarian, according to the Central Arkansas Library System Encyclopedia of Arkansas.

Good, in an interview broadcast on AETN, described following her father on hunting and fishing trips. The family lived in Kirby, an unincorporated community, and in Willisville in southwest Arkansas.

Good studied chemistry and physics at what's now the University of Central Arkansas, earning a bachelor's degree. She then earned advanced degrees from the University of Arkansas, Fayetteville, where she met her husband, William Jewel Good. The Encyclopedia of Arkansas lists Good as the first woman in the state to earn a doctorate in a so-called hard science, such as chemistry.

Her academic career took her in the 1950s to Louisiana State University, where she became renowned for her research and worked in New Orleans.

In 1974, she was the first woman to become an LSU Boyd professor, the school's top professorial rank.

She left after 25 years and took on jobs in industry while also devoting time to public service, serving on the National Science Board from 1980-1991, including three years as chairwoman. The board recommends policies relating to the promotion of scientific research and education.

Gorman said Good worked with the nonprofit Women's Foundation of Arkansas in the late 1990s to help create a program that takes eighth-grade girls to college campuses to learn about opportunities in science, technology, engineering and mathematics.

"I was really intimidated by her intellect, but a few minutes into our conversation, I was really at ease because of how passionate she was about advancing the status of girls and women in the field of science and technology," Gorman said.

Gorman said Good used her intellect and standing to "champion programs and causes," often making a winning argument in doing so.

"If Mary Good told you something, you knew that she had done the research. She knew what she was talking about," Gorman said.