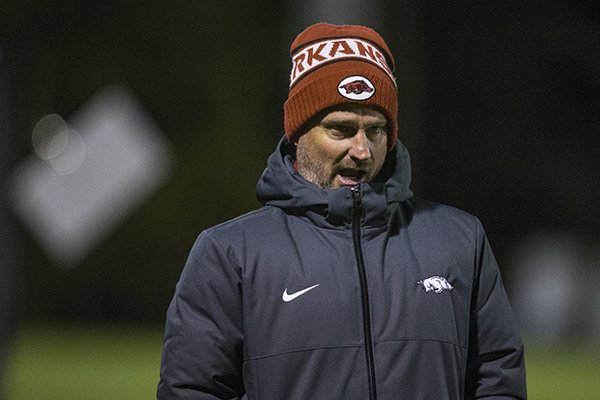 FAYETTEVILLE -- The previous two times the University of Arkansas soccer team hosted a first-round NCAA Tournament game, its season came to an end in the next round against a team from the ACC.

Coming off a 3-0 first-round victory over North Texas at Razorback Field last week, Arkansas is hopeful to end that pattern when it plays North Carolina State today at 4 p.m. Central on the BYU campus in Provo, Utah. The game will be shown on WCCSports.com.

WHAT NCAA Soccer Tournament second round

NOTEWORTHY North Carolina State finished fifth in the ACC during the regular season with a conference record of 4-2-4. … Arkansas has recorded 13 shutouts this season, a school record. … Arkansas Coach Colby Hale won his 100th career game with last week’s first-round victory. Hale was initially credited with his 99th victory, but a discrepancy was discovered in the Razorbacks’ record book that had shorted him a victory during the 2015 season.

The Razorbacks never have defeated an ACC team in the NCAA Tournament, and have been eliminated by an ACC team four times in the past five seasons.

"They were good teams," Arkansas Coach Colby Hale said, "but I think we're a different team this year, too."

The Razorbacks (17-3-2) are looking to make it past the second round for the second time in program history and first time since 2014.

North Carolina State (11-6-4) defeated Navy 3-0 in its tournament opener last week. The Wolfpack have won five of their past six matches, with the only loss during that time coming to North Carolina in the semifinal round of the ACC Tournament on Nov. 8.

North Carolina, which suffered its only loss of the season to the Razorbacks in September, is one of three common opponents for Arkansas and NC State, along with South Carolina and Minnesota. The Razorbacks were 1-2-1 in games against those teams, and the Wolfpack were 0-4.

Hale said the teams have different styles. Arkansas will try to speed the game up, while NC State will try to slow it down.

"It will be a tempo game," he said. "It will be interesting to see who can control the tempo."

The Razorbacks were dominant in their tournament victory over North Texas, Hale said. Arkansas outshot the Mean Green 26-1, and put North Texas away with two goals in the final nine minutes.

"The first game is always tough," Arkansas goalkeeper Katie Lund said afterward, "... so getting over this hurdle was great for us, and moving forward we have some good momentum."

The winner of today's game will play again in Provo on Saturday in the 16-team round of the tournament against either BYU or Louisville. The Cougars and Cardinals are scheduled to play at 7 p.m. Central today.

BYU (19-0-1) is the only unbeaten team in this year's tournament and was the No. 2 seed in its bracket, which gave it home-field advantage through the tournament's first three rounds.

Arkansas, the No. 3 seed in the bracket, was hopeful for a No. 2 seed after winning the SEC regular-season title and finishing the regular season with an RPI of No. 6.

"They're pretty ticked," Hale said of his team. "I think they're pretty motivated to try to show people that we were a two seed." 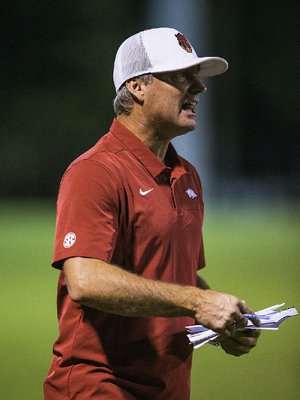 Photo by Ben Goff
Coach Colby Hale (above) and the Arkansas Razorbacks have been eliminated from the NCAA Tournament by an ACC team four times in the past five seasons.