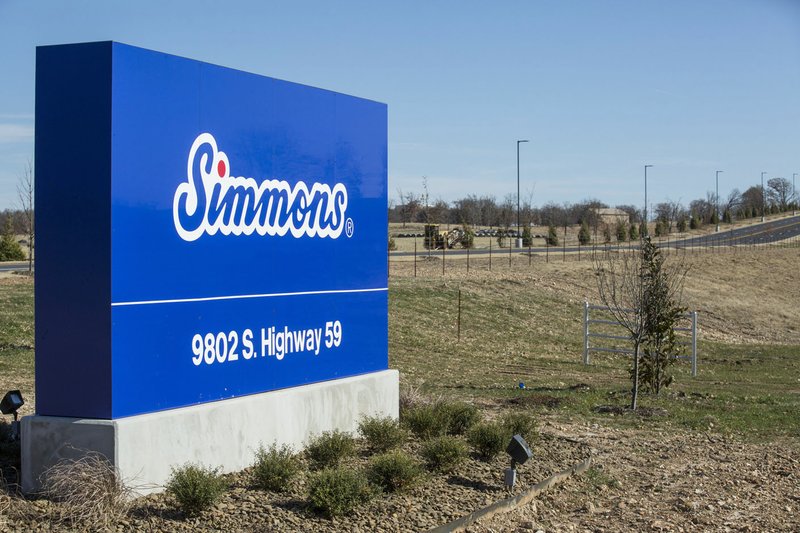 A sign for the new Simmons plant stands Wednesday along Arkansas 59 near Gentry. The plant is designed to harvest live chickens from around 300 independent family farmers to produce fresh and frozen chicken products, said Donny Epp, Simmons senior director of communications. - Photo by Ben Goff

The explosive growth in much of Northwest Arkansas has barely roused the roosters in Decatur and Gentry.

U.S. flags adorn the lampposts on both sides of Gentry's Main Street. "Gentry. Our Roots Run Deep," reads a sign in City Hall.

"Gentry has always been a slow-growing town, and I like it like that," said Anita Wise. "It still has a small-town feel. Kids play in the streets, and the police still come around and introduce themselves."

Railroad tracks hug Arkansas 59 on the west as their routes cut through Decatur. This is the home of the Bulldogs, the high school mascot, informs a sign. Two men sit outside the Gallery Cafe and watch the traffic move slowly by.

The locals express feelings of anticipation and trepidation.

"It's huge. It will cause growth. You know it will," said Gentry resident Mike Murphy. "I wish it would stay the same. I grew up here all my life. When you get to Highfill, it feels like you are back in the country. Growth is coming this way."

Decatur School Superintendent Steven Watkins said he expects to see his district grow as more workers come on board at the plant. The district has 541 students from kindergarten through high school.

"People will move in, and businesses and shopping will follow," he said. "They follow the people. The plant will be a cornerstone for growth in western Benton County."

Production at the plant began on a small scale the week of Sept. 30, and will steadily increase to reach the first phase of full production in January, according to a Simmons news release.

As cities along the Interstate 49 corridor become more crowded, smaller cities such as Gentry and Decatur could be affected, Gentry Mayor Kevin Johnston said. Gentry has a population of just more than 3,860 residents according to the U.S. Census Bureau. Decatur has a population of about 1,800, the bureau estimates.

"The game is changing and this has the potential to be a real catalyst," Johnston said of the Simmons plant.

The plant is along Arkansas 59 between Decatur and Gentry on 870-acres. Driving north out of Gentry, the plant appears to the east, beckoning with its newly paved, four-lane entry.

The Siloam Springs-based company announced plans for the facility in October 2017. A dedication ceremony was in June 2018.

The plant is designed to harvest live chickens from around 300 independent family farmers to produce fresh and frozen chicken products, said Donny Epp, Simmons senior director of communications. It will replace the company's processing facility in Decatur, he said.

About 900 employees will transition from the Decatur plant, according to a company news release. The company plans to increase staffing to 1,200 employees in January with the potential of reaching 2,300 employees by 2022.

The processing facility will also increase the need for live chickens by 28 percent, which will increase the number of chicken houses, Epp said. Most of the farm growth will be in Arkansas, Oklahoma and Missouri.

Mervin Jebaraj, director for the Center for Business and Economic Research at the University of Arkansas, said many employees will probably commute from a wide area including other cities in Benton County, Washington County, Oklahoma and perhaps Missouri.

"That's a significant number of jobs," he said. "The jobs are very important. The money they bring in is very important. It adds to the economy and to the employment mix."

Historically, over 85% of the workforce at the Decatur plant lived within 35 miles of the operation, commuting from surrounding communities such as Siloam Springs, Gentry, Springdale, Rogers, Gravette and Jay, Okla., Maus said.

Decatur will provide wastewater services to the plant, Mayor Bob Tharp said. That use can be as high as 50 million gallons of water a month, he said.

Johnston said Simmons will build and set up its own water storage for the plant and has paid for an additional access line to the nearby Benton-Washington County Regional Public Water Authority system.

Decatur and Gentry will need to provide other infrastructure, such as affordable housing, to perhaps entice commuters to stay or spend money in the two cities, Jebaraj said. A production plant setting is different than an office park where employees can get away for a cup of coffee or go to lunch, he said.

Mark Smithson, Gentry building inspector, said plans for at least eight subdivisions are in the works. The largest one will have 246 homes when finished in the next few years, he said. Some homes are complete, he said.

Another subdivision will have 117 homes, Smithson said. Paving in that subdivision happened Wednesday.

The city will add at least 600 homes from the planned subdivisions, he said. Most of the homes will be between 1,600 and 1,800 square feet, he said.

Smithson hasn't seen any plans for apartment complexes, but said two four-plexes are planned and four buildings with 16 units each recently opened.

Gentry has a 2-cent city sales tax, which remitted $100,127 in October, according to data in City and Town, a publication of the Arkansas Municipal League. The revenue represents August sales.

Kim Wilkins, secretary of the Decatur Planning and Zoning Commission, said the city hasn't received any plans for new housing subdivisions or retail because of the plant, but that could change in the next few years. Developers have started to look at the city more closely, she said.

Decatur has a 1-cent city sales that brought in $23,074 in October, according to Arkansas Municipal League data.

Arkansas 59 was widened earlier this year to include a turning lane in front of the plant.

The Arkansas Department of Transportation website shows 2018 daily traffic counts of 9,700 to 13,000 vehicles on Arkansas 59 between Gentry and Decatur. The 2018 numbers are the most current.

The Northwest Arkansas Regional Planning Commission estimates as many at 16,000 vehicles a day on some stretches of the highway between the two cities by 2040.

"That plant is significant for that corridor for sure," said Jeff Hawkins, Regional Planning director.

The commission is working on its long-range plan to 2045, Hawkins said. Western Benton County and the Arkansas 59 corridor could be a good place for growth, he said.

"When you look at long-range planning, where do you put another 500,000 people in the next 25 years?" Hawkins said. "Where will they live? How will they get to work?"