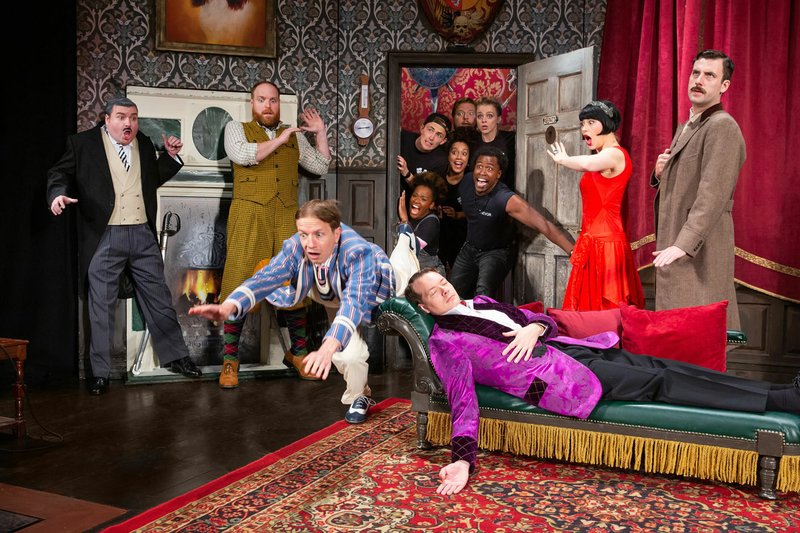 Photo courtesy Jeremy Daniel HuffPost calls "The Play That Goes Wrong," "the funniest play Broadway has ever seen!" The show is on its first national tour and makes its Arkansas premiere Nov. 12 at the Walton Arts Center.

"The Play That Goes Wrong" is hysterical.

There. There's my review.

"The Play That Goes Wrong" is a play-within-a-play, so stay with me. We, the audience, are in attendance for the opening night of the fictitious Cornley University Drama Society's staging of "The Murder at Haversham Manor." The inept theater company is making their American debut with the very ambitious murder mystery play and, even before the play begins, things start going wrong. There's a missing cast member, faulty equipment and a frazzled crew. And if you're at the Walton Arts Center at least 15 minutes before the show begins, you'll see some of these "crew members" rushing around the lobby and the theater as they frantically prepare for opening night.

The real opening night -- of "The Play That Goes Wrong" -- took place on Nov. 12 at the WAC to a nearly full house who, I suspect, got a little more than they bargained for. I think most people, like myself, weren't quite sure exactly what to expect from the only non-musical on the WAC's Broadway series this year. If you enjoy outrageous, witty, subtle, farcical or slapstick comedy, you'll find each in "The Play That Goes Wrong." If you enjoy all these things rolled together, disintegrating steadily into chaos, that's what you'll experience as the show progresses.

Rather than the usual greeting by WAC President Peter Lane, "The Murder at Haversham Manor" director/designer/prop maker/PR manager (and, and, and) Chris Bean (portrayed by Chris Lanceley) welcomes the audience to the company's opening night. In his address, you get a feel for how under-prepared the company is to take on such a performance (after already witnessing some bumbles on stage with the tech crew before the play begins). But the Cornley University Drama Society is full of actors who are professional talent to the highest degree (in their own minds) and are excited to take on the challenge.

The show opens on a lush 1920s library/parlor, with a dead(ish) body laying on the chaise at center stage. The actors commence in trying to uncover who killed Charles Haversham (played by Jonathan Harris; played by Chris French) but a collapsing set, an unconscious cast member, missed lines, misplaced props and other pandemonium make each moment more and more difficult for the actors to push through. They do, though, as if by continuing with the show, perhaps the audience won't notice the play toppling before their eyes.

The Associated Press calls the show "Madcap mania with Monty Python in its blood," which provides a sense of the humor. But, as I mentioned, there's so much going on at every turn that even this statement doesn't reveal the full depth of the humor. From scene to scene, bit to bit, I had no idea what was going to happen next and how far they were going to take some of the jokes. (Some of the gags are taken nearly to the point of painful, by the way, bringing you to the edge of your seat waiting for the joke to break.)

Every member of the small cast was hilarious and outrageous in their own way, including the set, which is considered almost a whole other character in the show. "She won the Tony (Award for Best Scenic Design) so she's a bit of a diva now and she knows it," quipped actor Jemma Jane, the female cover for the production, during our podcast interview. Two particular highlights for me were watching several actors step into the role of the same character (cast members just keep getting knocked unconscious!), and when actors in the "Haversham Manor" cast would break character to argue or hint to their fellows.

"The Play That Goes Wrong" had me shrieking with laughter all the way through. Even the times when I thought I knew what was going to happen with a staging device or set piece, I was usually wrong and what did end up taking place was so unexpected that it had me pleasantly shocked and in hysterics.

There are five more chances to see "The Play That Goes Wrong" at the Walton Arts Center, which is on its first national tour after opening on Broadway in 2017. Tickets start at $32.

‘The Play That Goes Wrong’