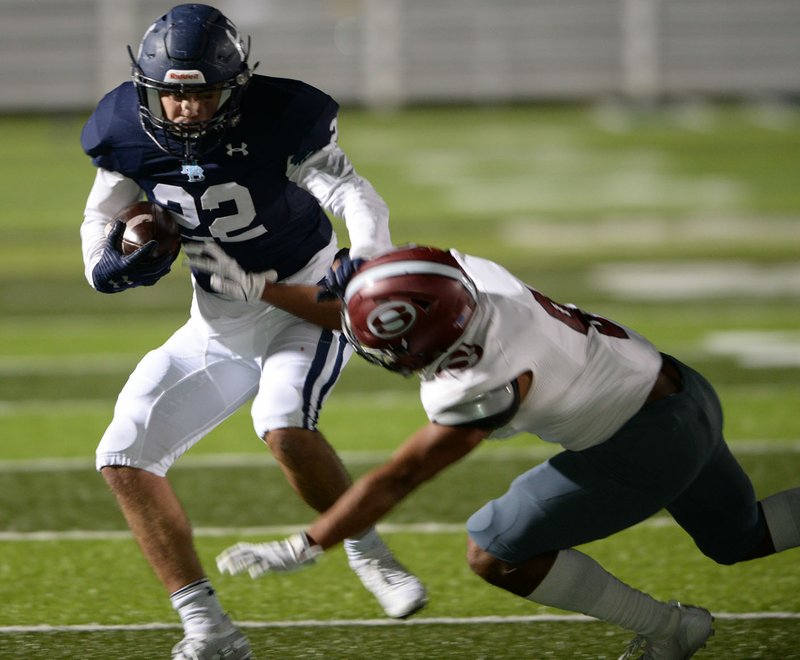 NWA Democrat-Gazette/ANDY SHUPE Springdale Har-Ber running back Max Pena (22) fends off Springdale safety Bryndell Cook (9) Friday, Oct. 11, 2019, during the first half at Wildcat Stadium in Springdale. Har-Ber, the No. 3 seed from the 7A-West, will host Little Rock Central in the first-round of the Class 7A state playoffs.

BETWEEN THE LINES Last year's loss marked the first time Bentonville had not reached the semifinal round since 2009. ... Since postseason was expanded from 8 to 12 teams in 2008, the Tigers have had a first-round bye in all but one year -- 2016. ... This year marks the first time Bentonville has gone undefeated through the regular season when it happened three straight years in 2010-12. The Tigers reached the championship game all three years. ... If Bentonville wins the state championship next month, it will mark head coach Jody Grant's 50th victory as head coach. ... QB Ben Pankau, who started the season sharing the role with junior Andrew Edwards, has taken over as the starter and eclipsed the 1,500-yard passing mark last week against Bentonville West. ... LBs Cole Joyce and Keegan Stinespring lead a Tigers defense that has allowed an average of 262 yards per game and gave up 254 last week against West.

UP NEXT Will face the winner of Van Buren vs. Little Rock Catholic in the quarterfinal round.

LAST PLAYOFF RESULT Defeated Conway 31-17 in the quarterfinals; lost to North Little Rock 42-17 in the semifinals.

BETWEEN THE LINES Nobody else can stake the claim that West can -- that its football team has been to the playoffs every year of the school's existence. ... The Wolverines have also hosted their first playoff game each year and have progressed each year. West reached the quarterfinals two years ago, then made it to the semifinals last year. ... West has earned a first-round bye for three straight years. ... The Wolverines have had their share of injuries, including a season-ending knee injury to heralded linebacker Jonas Higson during a 24-20 win over Springdale Har-Ber. West had seven starters missing in its loss to Van Buren. ... RB/LB Nick Whitlatch, who missed two games with a nonfootball-related injury, returned last week and had 54 yards rushing, giving him 705 for the season. ... QB Dalton McDonald, in his first full year as a starter, has thrown for 1,799 yards and 15 TDs.

UP NEXT Will face the winner of Conway vs. Rogers High in the quarterfinal round.

BETWEEN THE LINES Reed guided Cabot to a playoff berth in his first season as coach. Reed took over after Mike Malham Jr. retired ... Reed's arrival meant a completely different offensive scheme for the Panthers. After years of running the Dead-T, the Panthers now run a spread offense behind Gee, who threw for 291 yards and three touchdowns against North Little Rock. ... Former Bentonville assistant Rob Coleman is now an assistant on the Panthers staff. ... Fayetteville is making its 17th consecutive appearance in postseason play, the longest tenure of any 7A-West school. ... The last time the Bulldogs failed to win a playoff game in a season was 2013, when they lost to Little Rock Central. ... Fayetteville played this season under its four head coach in five years as Casey Dick took over after Billy Dawson resigned. ... QB Hank Gibbs surpassed the 2,000-yard passing mark this season despite sharing time at the spot with Quinn McClain.

UP NEXT The winner will travel to Bryant, the defending 7A state champion and the No. 1 seed from the 7A-Central, in the quarterfinal round.

LAST PLAYOFF RESULT Central lost 35-26 to Rogers Heritage in the 2014 opening round. Har-Ber lost to Fort Smith Northside 21-9 in the opening round of the 2017 playoffs.

BETWEEN THE LINES Central earned its first winning season in five years when Keeling Barker kicked a 28-yard field goal on the final play and gave the Tigers a 17-14 win over Little Rock Catholic. ... QB Lawson Gunn threw for 348 yards and four touchdowns in Central's 42-25 victory over Rogers High earlier this season. ... RB Sam Franklin opened the season with 162 yards and three touchdowns as the Tigers knocked off West Memphis. ... Har-Ber returns to postseason play after a one-year hiatus caused by forfeits. ... It was the first time the Wildcats had missed the playoffs since their 2006, their inaugural year of varsity action. ... Har-Ber will try to break a three-game losing skid in postseason play. The Wildcats' last playoff win was a 37-7 decision over Fort Smith Southside in the opening round of the 2015 playoffs. ... RB Jay Burns, who led the 7A-West in rushing, surpassed the 1,000-yard mark this season with a 143-yard outing against Fayetteville. ... The Wildcats held Fayetteville to 215 yards total offense -- just 57 of those in the second half -- in a 27-6 victory over the Bulldogs to earn the No. 3 seed.

UP NEXT The winner will travel to North Little Rock, the No. 2 seed from the 7A-Central, in the quarterfinal round.

BETWEEN THE LINES Van Buren is making back-to-back playoff appearances for the first time since the 2010-11 seasons, when it was a Class 6A school. ... The Pointers' last playoff win came in the opening round of the 2010 playoffs with a 41-14 win over Benton in the opening round before losing to El Dorado in the quarterfinals ... This is Van Buren's swan song in Class 7A after eight seasons in the state's largest classification. The Pointers will drop to Class 6A status next year and will be replaced by Little Rock Southwest, which opens in August. ... QB Gary Phillips is a dual-threat as he has thrown for almost 1,900 yards and run for more than 800 this year. ... LR Catholic seeks its first playoff win since 2008, when the Rockets defeated Fayetteville 35-21 in the opening round. Catholic has lost eight straight playoff games. ... Catholic snapped North Little Rock's 30-game conference win streak with a 41-21 win over the Charging Wildcats. ... The Rockets head into postseason play with two straight losses after their win over North Little Rock. ... War Memorial Stadium, the host for the state championship games, has also served as Catholic's home field for a number of years.

UP NEXT The winner will travel to Bentonville in the quarterfinal round.

LAST PLAYOFF RESULT Rogers lost to Conway 49-7 in the opening round last year. Conway lost 31-17 to Bentonville West in the quarterfinals last year.

BETWEEN THE LINES Since its run to the Class 7A state championship game in 2006, Rogers has yet to win again in postseason play. The Mounties are 0-5 in postseason play since then, and they have lost to Conway four times. ... QB Hunter Loyd, who has verbally committed to sign with Missouri State, needs 169 yards to reach the 3,000-yard mark this season. ... Mason Ross leads 7A-West receivers with 88 catches, including 10 in last week's game against Rogers Heritage. ... Mounties RB Aron Rendon, a converted receiver, has almost 700 yards rushing after taking over in the backfield following an injury to starter Sammy Zammaron. ... Conway QB Nick McCuin has thrown for 1,508 yards and 10 TDs this season. ... RB Manny Smith leads the Wampus Cats' ground game with 658 yards and 8 TDs despite missing two games. ... WR Bryce Bohanon has the most receptions on the team with 39, but Shane Smith has more yardage (637) and TD catches (6). ... LBs Reed Hughes and Parker Prock have 139 and 102 tackles, respectively, while DE Terrian Harris has 15 quarterback sacks.

UP NEXT The winner will travel to Bentonville West in the quarterfinal round.