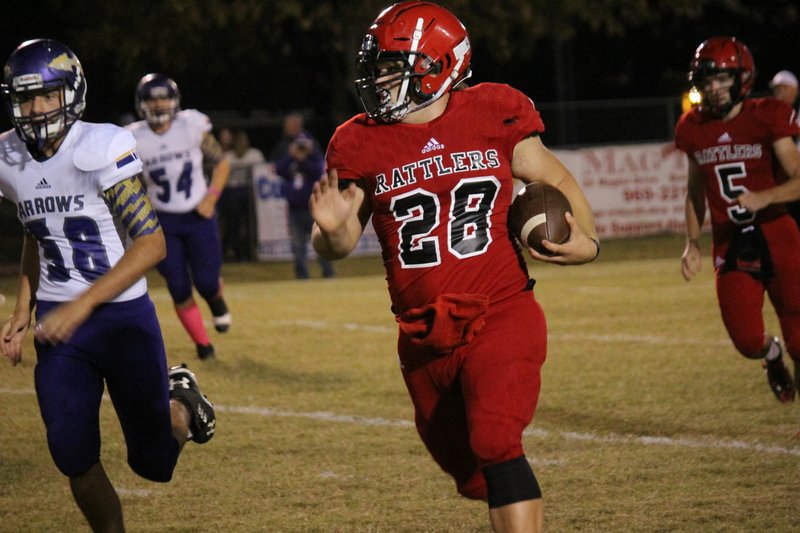 MAGAZINE -- Caleb Hyatt has never been one to pay much attention to statistics. Well, except for one -- wins.

"I don't like to lose," the Magazine senior fullback/linebacker said.

The Rattlers (7-1) went 5-0 in 2A-4 Conference play, winning by an average of 24 points per game and claiming the outright conference title.

"It meant so much to win a conference championship and bring that title back to Magazine after so long," Hyatt said.

Magazine, which won the Class 2A state title in 2010, is a No. 1 seed and will host No. 5 seed Mineral Springs (4-5) from the 2A-7 Conference at 7 p.m. Friday in the first round of the state playoffs at Diamondback Stadium.

It will be the third playoff appearance for Hyatt and his fellow seniors. The Rattlers lost in the first round to Rison in 2017 and lost in the second round to eventual state semifinalist Foreman last season.

Hyatt is humble and soft-spoken by nature, but he hasn't been able to avoid attracting attention to himself over the past three seasons.

He's averaging 6.9 yards per carry for his career, too.

"I never thought it would turn out like this," Hyatt said.

Hyatt fell in love with football as a first-grader playing quarterback for the Raiders in youth league football.

"Even over in little league, he did the same things there," Powell said. "A lot of times you can see them there when they are young, and if they work hard like he does, they'll do the same things when they get older."

Through a strict workout regimen, Hyatt matured into the bruising fullback and linebacker he is today with a chiseled, 5-foot-10, 230-pound frame.

"He's the guy who when we have our breaks here and there, like Christmas break, is asking if he can come up and lift," Powell said. "He's goal-oriented. He's got things he wants to accomplish."

"With what we do, the fullback makes a lot of things go. So how he goes, we tend to go," Powell said. "What we've had this year is a lot of teams have sold out to stop him, and that's opened up the halfbacks. They've had some really good games, too."

Limiting Hyatt's ability to take over a game may have been the focus of most of the Rattlers' opponents, but few have succeeded.

"He's had a lot of plays where he's been hit in the backfield 2 or 3 yards deep and gets back to the line of scrimmage or gains 1 or 2 yards," Powell said. "He's got a lot of yards after contact because he just keeps working."

Magazine has averaged almost 41 points per game this season with a season-high of 48 points in a 48-19 conference win at Hector.

Hyatt has scored at least one touchdown in all but one game this season -- a 38-12 win at Johnson County Westside -- and has five multi-touchdown games.

"I couldn't have done any of it without my offensive line," Hyatt said. "They are always making big holes for me. I couldn't do anything without them."

Hyatt ran 20 times for 226 yards and matched a career-high with four touchdowns in the Rattlers' only loss of the season -- a 33-32 loss at home against Cutter Morning Star.

"He can roll along there and just sort of be there, and then all of a sudden, he flips the switch," Powell said. "He did last year against Foreman (in the playoffs). We got down two scores, and he just stepped it up another notch and decided he had something he wanted to get done. He just found another gear and found more strength and more power."

Hyatt's rigorous weight-room workouts and conditioning program have helped him become a dominant two-way player for the Rattlers, who have allowed only 18 points per game.

"You get tired, but you just can't quit," said Hyatt of playing offense and defense. "Your teammates need you."

"He's a great linebacker," Powell said. "Of course, he has (junior linebacker) Kobe (Faughn) sitting right there beside him. We've got two really good linebackers, and that helps defensively."

NOTABLE Led the Rattlers to the 2A-4 Conference championship and No. 1 seed in the playoffs. … Has rushed for 915 yards on 112 carries and scored 15 touchdowns. … Has 47 tackles, 8 tackles for loss and 3 sacks this season. … Needs just 22 yards to eclipse the 3,000-yard mark for his career.