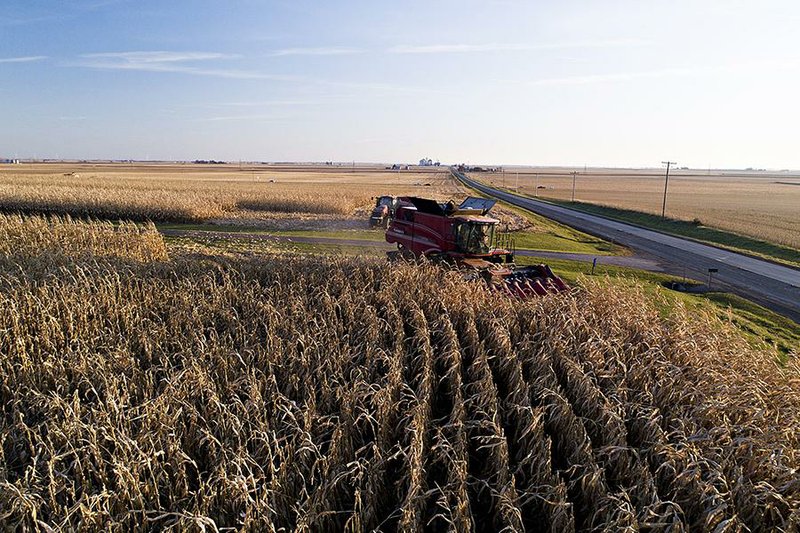 MINNEAPOLIS -- President Donald Trump's bailout package for farmers hurt by the trade war with China unfairly benefits the South at the expense of the North and helps wealthy producers over smaller farms, 15 Democratic senators concluded in a report released Tuesday.

The report, one of the sharpest congressional critiques yet of the Market Facilitation Program, said five Southern states receive the highest payments per acre under the program -- Georgia, Mississippi, Alabama, Tennessee and Arkansas. The analysis by Democratic committee staff members concluded that farmers in the Midwest and Northern Plains have been hurt the most.

The report also asserted that the U.S. Department of Agriculture has done nothing to direct the assistance to vulnerable small, medium and beginning farmers. Instead, it said, the agency doubled the payment limits, directing even more money to large, wealthy farming partnerships.

Democrats criticized the program for making commodity purchases from foreign-owned agricultural conglomerates, including $90 million paid to a subsidiary of Brazilian-owned JBS SA.

The USDA said in a statement that payments are based on trade damage, not regions or farm size.

"While we appreciate feedback on this program, the fact of the matter is that USDA has provided necessary funding to help farmers who have been impacted by unjustified retaliatory tariffs," the statement said. "While criticism is easy to come up with, we welcome constructive feedback from any member of Congress with recommendations as to how the program could be better administered."

Sen. Debbie Stabenow of Michigan, the top Democrat on the Senate Agriculture Committee, said the program also lacks any plan for rebuilding or replacing the markets that farmers have lost since they became caught up in the trade war last year. She leveled the criticism in a letter to U.S. Agriculture Secretary Sonny Perdue that accompanied the 12-page report.

"This Administration's chaotic trade agenda has irreparably harmed farmers, on top of the market instability and extreme weather challenges they already face," Stabenow wrote in the letter signed by 14 other Democratic senators, including Senate Minority Leader Charles Schumer of New York.

While the senators called on Perdue to "improve" the program before more payments go out, they proposed few specifics.

The agency has set aside nearly $16 billion under the Market Facilitation Program for the current crop year, up from $12 billion for 2018 crops. The agency has paid farmers nearly $6.8 billion so far in first installments. The states collecting the highest overall totals so far -- more than 60% of the funds -- are Iowa, Illinois, Minnesota, Texas and Kansas.

The agency is expected to approve second installments in the next few weeks and could release a final round in January if trade woes persist.

An Associated Press analysis in July found that many large farming operations had no trouble circumventing the program's payment caps. A separate AP analysis last month showed how a farming business owned by West Virginia Gov. Jim Justice -- a billionaire who's the richest man in his state -- collected the maximum of $125,000 then allowed under the program.

More than half of the Trump administration's first-year payments went to just 10% of the recipients in the program, according to an analysis by the Environmental Working Group of records obtained through the Freedom of Information Act.

Almost 40% of farm profits this year are projected to come from trade aid, disaster assistance, federal subsidies and insurance payments, according to an American Farm Bureau Federation report, based on Department of Agriculture forecasts. That's $33 billion of a projected $88 billion in net income.

Farm bankruptcies nonetheless are rising, this year hitting the highest levels since 2011.

Until now, Congress had been relatively muted in its criticisms of the aid program. Democratic Rep. Collin Peterson of Minnesota, who chairs the House Agriculture Committee, sent a less-sharply worded letter to Perdue earlier this month, pointing out several "inequities" and urging him to consider fixes.

The 2018 and 2019 versions used very different formulas for allocating aid. The program originally was based on a farm's production of certain crops. About 83% of the money went to soybean producers because they had suffered the most from China's retaliatory tariffs.

For 2019, farmers get fixed per-acre payments based on their county, varying from $15 to $150 per acre. The amounts are based on how much the USDA calculated that each county had been hurt. Counties qualifying for the highest per-acre payments are concentrated in the South, the report noted. And the payment caps were doubled, from $125,000 to $250,000.

Roger Johnson, president of the National Farmers Union, said the report highlights "gross disparities" from region to region. He noted that producers in western and northern soybean country, which typically shipped their crops to the Pacific Northwest for export to China, suddenly took a big price hit because they had nowhere to send their beans. Yet, he said, it shows the money flowed disproportionately to farmers in the South.

The USDA could have designed the program better if it had consulted with Congress, Johnson said, because the agriculture committees have experience in minimizing regional and other inequities.

Brooke Appleton, vice president of public policy at the National Corn Growers Association, said the Democratic senators' report, along with Peterson's letter, "raised important issues regarding the impact on Northern state corn farmers who have faced additional hurdles due to limited export opportunities in the Pacific Northwest."

Information for this article was contributed by Steve Karnowski of The Associated Press and by Mike Dorning of Bloomberg News.