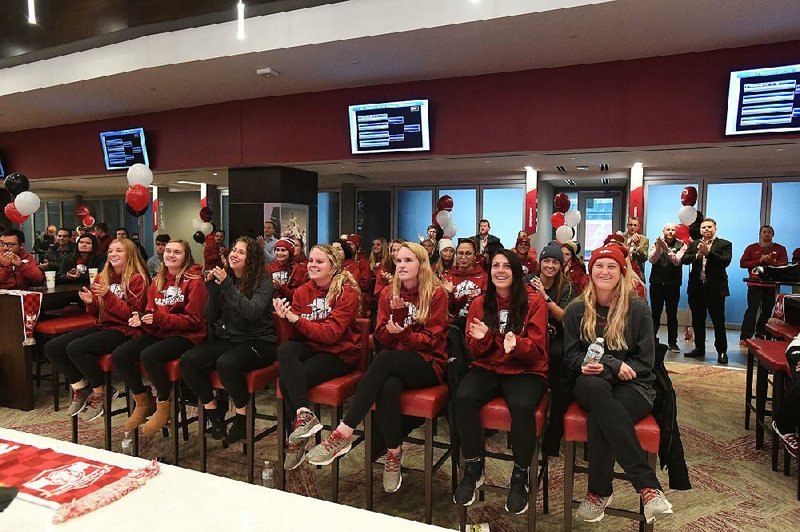 Members of the Arkansas soccer team cheer during a watch party after learning the Razorbacks will host North Texas in a first-round match at 6:30 p.m. Friday at Razorback Field in Fayetteville. - Photo by J.T. Wampler

FAYETTEVILLE -- Hopeful for a No. 2 seed that would have given it home-field advantage through the first three rounds of the NCAA Tournament, the Arkansas soccer team settled for a No. 3 seed when the postseason bracket was revealed Monday.

Winner will meet either Louisville, Lipscomb, Boise State or BYU on Nov. 24

"If you're going to go to a Final Four, Elite Eight or win a national championship, you're going to have to beat the best teams at some point," University of Arkansas Coach Colby Hale said about the seed. "We have a home game in the first round and we're excited. We'll play whoever wins the next game, and we'll win until we don't."

The Razorbacks had a strong case for a No. 2 seed, which is given to the nation's fifth- through eighth-best teams in the eyes of the tournament selection committee. Arkansas is ranked No. 6 in the national coaches poll, has the nation's sixth-highest RPI, won the SEC regular-season championship and was runner-up at the conference tournament. The Razorbacks also handed No. 1 seed North Carolina its only loss of the season with a 2-0 victory in September.

"It's the committee's decision, and we were happy with whatever we would have gotten because it's hard to make it to the NCAA Tournament as it is," Cannata said. "We're just happy for our name to be called and ready to play this Friday."

This is the first time Arkansas has been seeded for the NCAA Tournament. Seeds are given to the 16 best teams.

Arkansas is hosting a first-round game for the third time in four seasons. The Razorbacks defeated Memphis 2-1 in overtime in 2016, and the University of Arkansas at Little Rock 5-1 last year.

"It's important for us to play as many home games as possible," Cannata said, "especially in the postseason. Having the home crowd come out and lift us up really helps us out. We're very grateful that we get the chance to host again this year."

North Texas won the Conference USA Tournament with a 5-2 victory over Florida Atlantic on Sunday. The Mean Green are coached by John Hedlund, whose son, Cole, was a kicker on the Razorbacks' football team from 2015-17.

North Texas is in the NCAA Tournament for the third consecutive season and fourth time in the past five seasons. Arkansas defeated the Mean Green during the 2016 and 2017 regular seasons.

The winner of the Arkansas-North Texas game will play either North Carolina State or Navy in the second round.

The Razorbacks' second- and third-round games would be played in Provo, Utah, if BYU, an undefeated No. 2 seed, wins its first-round game against Boise State. A BYU loss would put Arkansas in line to host past the first round.