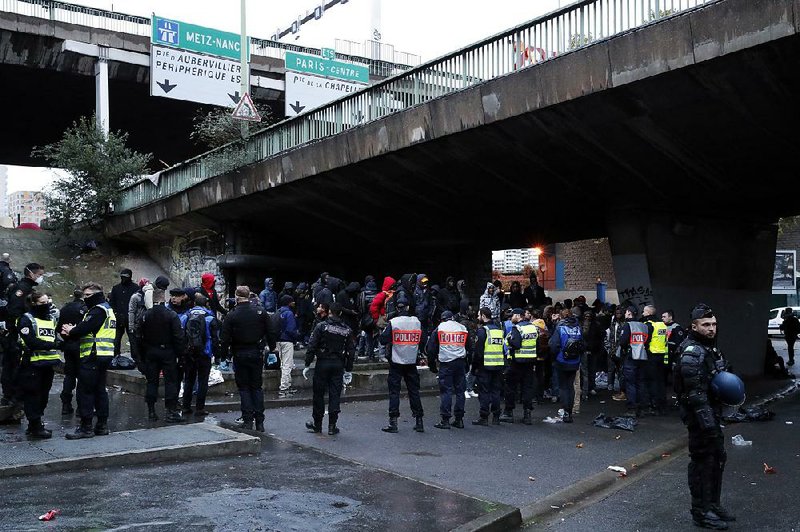 PARIS — French police dismantled makeshift migrant camps in areas underneath suburban highways Thursday in northeast Paris, creating an opportunity for President Emmanuel Macron’s government to tout its pledge to get tough on immigration.

Police carried out a large operation dismantling hundreds of tents and threatening to put those who return to the sites in detention centers.

Police official Didier Lallement said Thursday that “1,606 people were evacuated and the site is now freed of all its occupants.”

About 600 police officers were involved in clearing out the camps, as Lallement said a police presence in the areas would be maintained to stop the migrants from returning.

This highly publicized operation, the biggest in over a year, comes one day after a French government pledge to “take back control” of immigration.

LONDON — U.K. police say they have formally identified the 39 people found dead in a container truck in southeastern England and notified their families.

The authorities said Thursday that they’ve been working with Vietnamese police and the coroner to identify the bodies that were found Oct. 23 in the back of a truck in an industrial park in the English town of Grays.

“It is only right that we provide an opportunity for family members to take in the news confirming the death of their loved ones before releasing any further information,” said Assistant Chief Constable Tim Smith.

Police last week said all of the victims were Vietnamese citizens.

British police have charged 25-year-old Maurice Robinson from Northern Ireland with 39 counts of manslaughter and conspiracy to traffic people. They say he drove the cab of the truck to the English port of Purfleet, where it picked up the container, which had arrived by ferry from the port of Zeebrugge in Belgium.

Three other people have been released on bond pending further investigation in the case.

In Ireland, a 22-year-old man was arrested on a British warrant. Several other suspects have been arrested in Vietnam.

More than 40 aftershocks rattled the rural region nestled in the Alborz Mountains, and residents rushed out of their homes in fear.

The head of Iran’s emergency medical services, Pirhossein Koulivand, gave the casualty figures to state television. There were no immediate video or images broadcast from the area.

Rescuers have been dispatched to the region, officials said. State TV outlets reported the earthquake destroyed 30 homes at its epicenter.

The U.S. Geological Survey said the quake’s epicenter was at a depth of 6.2 miles. Shallow earthquakes tend to cause more damage.

Iran is on major seismic faults and experiences one earthquake a day on average. In 2003, a magnitude 6.6 earthquake flattened the historic city of Bam, killing 26,000 people.

A magnitude 7 earthquake that struck western Iran in 2017 killed more than 600 people and injured more than 9,000.

BAGHDAD — Iraqi security forces opened fire Thursday, killing six protesters as they were trying to remove barriers blocking their march in central Baghdad, while in the south, demonstrators forced the closing of the country’s main port, hours after services had resumed after days of closure, officials said.

Demonstrators have been trying to reach the Green Zone, which houses government offices and foreign embassies.

Along with the six killed, at least 41 protesters were wounded as security forces fired live rounds and tear gas to disperse the march in downtown’s Rashid Street, where the central bank is, security and medical officials said.

The protesters were trying to remove barriers near two bridges that lead to the west bank of the Tigris River. Now all bridges leading to the Green Zone have been blocked by security forces.

Tens of thousands of people have taken to the streets since last month in the capital and across the largely Shiite south to demand sweeping political change. More than 250 people have been killed since the unrest broke out Oct. 1. 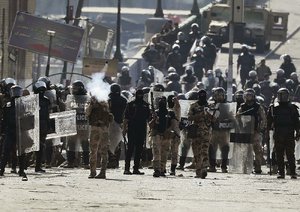