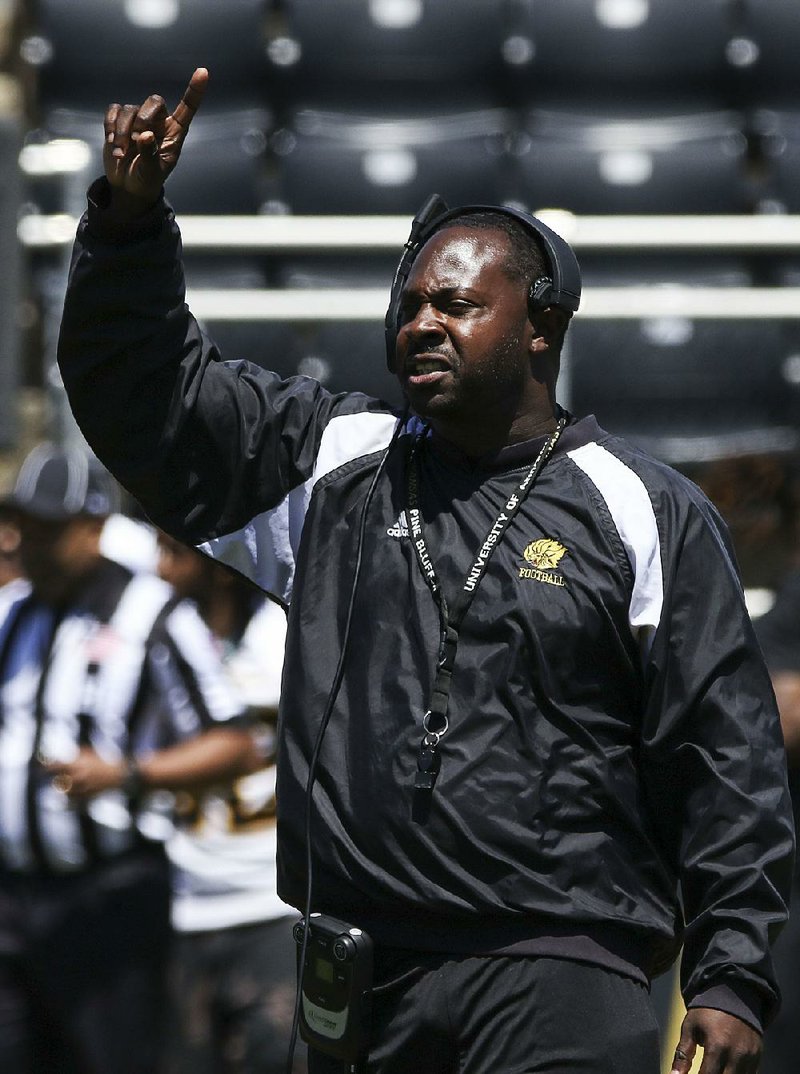 UAPB Coach Cedric Thomas said the Golden Lions knew they had their hands full with Jackson State last week. “The kids played hard, all the way until the end. We just fell a little short and ran out of time,” Thomas said.

It's unknown whether University of Arkansas at Pine Bluff Coach Cedric Thomas uses emojis, but the upside-down face would have summed up his demeanor perfectly after last week's loss to Jackson State.

Calm and collected on the outside with a hint of anguish on the inside.

The Golden Lions took a 21-12 setback against the Tigers. The loss ended UAPB's aspirations of reaching the Southwestern Athletic Conference Championship Game, so no one could blame Thomas for the desolate look on his face afterward.

"We knew we had our hands full, and the atmosphere matched it," he said. "The kids played hard, all the way until the end. We just fell a little short and ran out of time.

UAPB's offense was stuck in neutral for most of the game. Of their 15 drives, seven ended in punts, three were ruined because of interceptions, two were turned over on downs and one resulted in a missed field goal. The two series in which the Golden Lions offense showed signs of steadiness ended with touchdowns.

That type of offensive ineptitude wasn't nearly enough to beat a Jackson State team that, like UAPB, was playing to remain in SWAC contention. The victory not only pushed the Tigers' late-season winning streak to three games, but it also kept them in control of their own destiny in the East division.

For UAPB (5-4, 2-3 SWAC), its fate is no longer in question. The Golden Lions, who faced Jackson State without leading rushers Taeyler Porter and KeShawn Williams, have lost back-to-back games for the first time this season. They will try to rebound Saturday against Prairie View A&M.

There's a lot for UAPB to play for over the final two games of the season. UAPB already has as many victories this year as in the previous three years combined, but beating either Prairie View A&M or Texas Southern would clinch the first winning season for the Golden Lions since 2012.

"We're an overall better football team than when we took this thing over," Thomas said. "Kids understand the why behind what's asked of them. We're a whole lot more mentally tough, and we've got some kids that can make some big-time plays.

"But right now, we've just got to learn how to win, learn how to finish. Our kids had never been in this situation before, and I've got some seniors that have never won five games. We've got to understand that playing meaningful football in late October and in the beginning of November, everybody's out to get you. You can't sneak up on anyone, and you've got to play your A-game."

If anyone can sympathize with UAPB Coach Cedric Thomas, it's Prairie View A&M Coach Eric Dooley.

The Panthers had more starters back than any team in the SWAC, which fueled aspirations of winning a title. Losses in three of their past four league games by a combined 11 points have derailed their plans.

Prairie View A&M (3-5, 2-3), much like UAPB, can gain a share of the West division crown, but that's the best it can do because it also lost the head-to-head tiebreaker with Southern.

"We've just got to move forward and finish off the season," Dooley said. "I like the energy and enthusiasm right now. From day one, they set out with a no-quit attitude, and they understand the magnitude of where we are, and what kind of hole we dug ourselves in.

"But those guys are just fighting to continue to compete at a high level and give us an excellent opportunity to perhaps have a winning season."

On a night where not much went well offensively for UAPB against Jackson State, the defense did its part to keep the Golden Lions in the game. That unit may have to repeat the performance when UAPB travels to Texas to face Prairie View A&M.

The Panthers have the SWAC's top-ranked offense, led by the league's leading rusher in Dawonya Tucker. The diminutive 5-5 speedster is coming off a 159-yard, 3-touchdown outing in his last game against Jackson State. He is closing in on his second consecutive 1,000-yard season.

"To watch Mr. Tucker develop in this league is really awesome," UAPB Coach Cedric Thomas said. "We got a chance to play [Chicago Bears running back] Tarik Cohen in the Celebration Bowl, and he puts you in the mind of that. Coming in undersized, probably didn't have a whole bunch of offers because of his stature.

"But to watch that kid develop, get stronger, be able to catch the football ... that's what this league is about."

Tucker averages 7.4 yards per carry and is tied for second in the conference with 10 rushing touchdowns, including an 80-yard score in the loss to Jackson State.