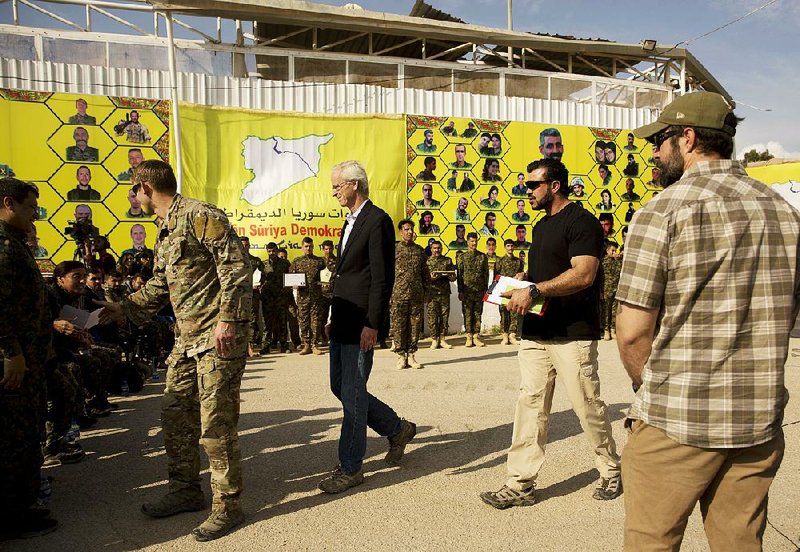 William Roebuck (center), the top U.S. diplomat on the ground in northern Syria, leaves after speaking at a March 23 ceremony at the al-Omar Oil Field base to celebrate the U.S.-backed Syrian Democratic Forces defeat of Islamic State militants in Baghouz. Roebuck criticized the Trump administration in an internal memo for not doing more to stand in the way of Turkey’s operation against U.S. allies in northern Syria.

WASHINGTON -- The top American diplomat on the ground in northern Syria has criticized the Trump administration for not trying harder to prevent Turkey's military offensive there last month and said Turkish-backed militia fighters committed "war crimes and ethnic cleansing."

In an internal memo, the diplomat, William Roebuck, raised the question of whether tougher U.S. diplomacy, blunter threats of economic sanctions and increased military patrols could have deterred Turkey from attacking. Similar measures had dissuaded Turkish military action before.

"It's a tough call, and the answer is probably not," Roebuck wrote in the 3,200-word memo. "But we won't know because we didn't try." He did note several reasons the Turks might not have been deterred: the small U.S. military presence at two border outposts, Turkey's decades-long standing as a NATO ally and its formidable army massing at the Syrian frontier.

In his critique, Roebuck said the political and military turmoil that upended the administration's policy in northern Syria -- and left Syrian Kurdish allies abandoned and opened the door for a possible Islamic State resurgence -- was a "sideshow" to the bloody, yearslong upheaval in Syria overall.

But, he said, "it is a catastrophic sideshow and it is to a significant degree of our making."

Roebuck, a respected 27-year diplomat and former U.S. ambassador to Bahrain, sent the unclassified memo Oct. 31 to his boss, James Jeffrey, the State Department's special envoy on Syria policy, and to about four dozen State Department, White House and Pentagon officials who work on Syria issues. Roebuck is Jeffrey's deputy.

The New York Times obtained a copy of the memo from someone who said it was important to make Roebuck's assessment public. Jeffrey and Roebuck declined to comment Thursday.

Morgan Ortagus, the State Department spokeswoman, also declined to comment on Roebuck's memo. "That said, we have made clear that we strongly disagreed with President [Recep Tayyip] Erdogan's decision to enter Syria and that we did everything short of a military confrontation to prevent it," Ortagus said in a statement Thursday.

"No one can deny that the situation in Syria is very complicated, and there are no easy solutions and no easy choices," she said. "There will always be a variety of opinions on how this complex situation should be managed. This administration's job is to do what is best for U.S. national security and the American people. That is what we have done in Syria and what we will continue to do."

Roebuck's memo appears to be the first formal expression of dissent on Syria from a Trump administration official to be made public. Pentagon officials voiced alarm by the sudden shift in Syria policy, but top officials never made their views public.

Roebuck's memo also comes as President Donald Trump already has expressed disdain for some State Department officials because of their testimony in Congress during the impeachment inquiry over Ukraine policy.

For nearly two years, Roebuck has worked on the ground in northern Syria with Syrian Kurdish and Arab military and civilian officials who make up what is called the Syrian Democratic Forces. Roebuck has been an important interlocutor with Mazlum Kobani, the Syrian Kurdish military commander whose fighters have worked closely with American special operations forces to combat the Islamic State group.

Roebuck focused his harshest criticism on Turkey's military offensive and specifically on Turkey's deployment of Syrian Arab fighters in its vanguard force. Roebuck added his voice to accusations by human-rights groups that these fighters have killed Kurdish prisoners, including one of them lying on the ground with his hands bound behind his back, and committed other atrocities as they emptied major Kurdish population centers in northern Syria.

"Turkey's military operation in northern Syria, spearheaded by armed Islamist groups on its payroll, represents an intentioned-laced effort at ethnic cleansing," Roebuck wrote, calling the abuses "what can only be described as war crimes and ethnic cleansing."

By acting now, Roebuck wrote, "we have a chance to minimize the damage for us and hopefully correct some of the impact of Turkey's current policies, as we seek to implement the president's guidance for our presence in northeastern Syria."

But the senior official acknowledged that the Turkish-based Syrian force included ill-disciplined Arab fighters -- the Arabs and Kurds have a history of sometimes bloody rivalry in the region -- and that some embrace radical Islamic ideology.

Roebuck's memo was aired at a tumultuous time on the ground in northern Syria and at a delicate moment for the administration's Syria policy. Jeffrey is scheduled to travel to Ankara and Istanbul for meetings today and Saturday with senior Turkish officials and members of the Syrian opposition to the government of President Bashar Assad of Syria.

The memo came two weeks after Vice President Mike Pence agreed to a deal with Erdogan that accepted a Turkish military presence in a broad part of northern Syria in exchange for the promise of a five-day cease-fire, completing an abrupt reversal of U.S. policy in the Syrian conflict. Pence hailed the agreement as a diplomatic victory for Trump, calling it a "solution we believe will save lives."

The memo also came about a week after President Vladimir Putin of Russia met with Erdogan in Sochi, Russia, to discuss how their countries and other regional players would divide control of Syria, devastated by eight years of civil war.

The negotiations cemented Putin's strategic advantage: Russian and Turkish troops have taken joint control over a vast area of formerly Kurdish-held territory in northern Syria. The change strengthened the rapid expansion of Russian influence in Syria at the expense of the United States and its Kurdish former allies.

Under criticism for abandoning the Syrian Kurds and ceding territory they once held to Syria, Turkey and Russia, Trump changed course yet again last month and approved the deployment of several hundred American troops to guard oil fields in eastern Syria against the Islamic State, even as hundreds of other American forces were withdrawing under Trump's initial order.

Roebuck said the president's decision salvaged an important part of the mission against the Islamic State group and preserved some space on the ground for the Syrian Kurds to operate after they were forced to pull back from the border.

But the United States will pay a price, he wrote.

"The decision to stay is a good one, even if the 'protection of the oil' rationale plays into toxic Middle Eastern conspiracy theories that will need to be lanced with careful, sustained messaging reinforcing the truism that Syria's oil is Syria's and for the benefit of the Syrian people," Roebuck wrote.

As critical as he was about Turkey, Roebuck praised the Syrian Democratic Forces as a stout and reliable partner that had suffered many casualties. He said the group had helped defeat the Islamic State and lead American commandos to the hideout of Abu Bakr al-Baghdadi, the Islamic State leader, and had provided reasonably sound local governance as well as a relatively stable security environment.

It was not a perfect situation, Roebuck said, but it was working and allowed United States forces to operate there in low numbers and safely at very low cost. "It wasn't a bad start," he said.

At the end of his memo, Roebuck offered some diplomatic options, including maintaining relations with Turkey and making clear to Turkish leaders they will bear the brunt of the costs for the military operation.

He also advocated using what time the United States has left in northeastern Syria to help stabilize the situation for the Kurdish population. Kobani, the Syrian Kurdish commander, said in a Twitter message Wednesday that the Syrian Democratic Forces were resuming counterterrorism operations as well as helping secure the oil fields, which provide the Kurds badly needed revenue.

"President Trump has been clear and consistent about wanting to get our forces out of Syria," Roebuck concluded. "The residual presence to protect the oil and fight ISIS buys us some time," he said, using an alternate name for the Islamic State.

But he cautioned: "Our diplomacy will also need to recognize we -- with our local partners -- have lost significant leverage and inherited a shrunken, less stable platform to support both our [counterterrorism] efforts and the mission of finding a comprehensive political solution for Syria."