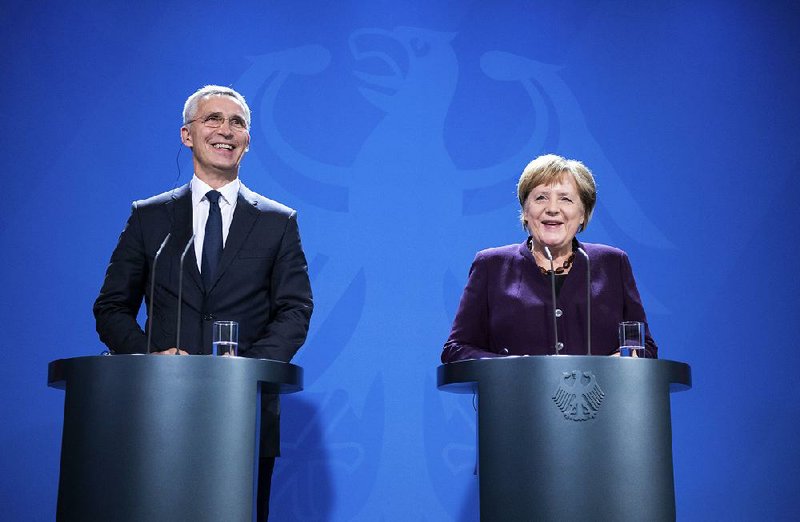 In Berlin on Thursday, NATO Secretary General Jens Stoltenberg and German Chancellor Angela Merkel rejected criticism that the U.S. is causing the “brain death” of NATO.

BRUSSELS -- French President Emmanuel Macron claimed that a lack of U.S. leadership is causing the "brain death" of the NATO military alliance, insisting in an interview published Thursday that the European Union must step up and start acting as a strategic world power.

Macron's public criticism of the state of the world's biggest military alliance was rejected by German Chancellor Angela Merkel and NATO Secretary-General Jens Stoltenberg, setting the scene for a possible showdown in London next month when U.S. President Donald Trump joins his counterparts.

"What we are currently experiencing is the brain death of NATO," Macron told The Economist magazine. He said the United States under Trump appears to be "turning its back on us," notably by pulling troops out of northeast Syria without notice.

Trump surprised his NATO partners with last month's troop withdrawal. NATO plays no role in Syria, apart from helping the coalition in fighting the Islamic State group. But the move was seen by Turkey, another NATO ally, as a green light to invade the region.

"So as soon as you have a member who feels they have a right to head off on their own, granted by the United States of America, they do it. And that's what happened," Macron said.

Trump also surprised the allies by announcing a troop drawdown in Afghanistan and then declaring that peace talks with the Taliban were canceled after a bomb attack killed a U.S. soldier. NATO has played a major security role in the country since 2003, but its future there is now unclear.

Beyond that, the U.S. leader publicly criticized other leaders at a May 2017 summit for failing to boost their military budgets.

The United States is the biggest and most influential member of NATO. It spends more on its defense budget than all the others combined.

Macron said the European members of the 29-nation alliance "should reassess the reality of what NATO is in the light of the commitment of the United States."

But after talks with Stoltenberg in Berlin, Merkel said, "The French president chose drastic words. That is not my view of cooperation in NATO and I think that such a sweeping blow is not necessary, even if we do have problems, even if we must pull together."

More broadly, Trump's trade tariffs against the EU have also rankled European members of NATO and have appeared to target Germany.

In the interview, Macron said that Trump "doesn't share our idea of the European project." He added that Europe stands on "the edge of a precipice" and must start thinking like a geopolitical power, otherwise it will "no longer be in control of our destiny."

Merkel, however, said that "we in Europe certainly must take our fate in our hands a bit more, but the trans-Atlantic alliance is indispensable for us and I think there are many areas in which NATO works well."

Agreeing with Merkel, Stoltenberg said, "We have to remember that any attempt to distance Europe from North America risks not only [weakening] the alliance, the trans-Atlantic bond, but also to divide Europe, so therefore we have to stand together."

Secretary of State Mike Pompeo and his German counterpart also stressed the close ties between their two countries Thursday.

Speaking after visiting the German village of Moedlareuth, which was divided into two during the Cold War, Pompeo said that it was the "remarkable work" of democratic nations that "created freedom and brought millions of people out of very, very difficult situations."

"I think NATO remains an important, critical, perhaps historically one of the most critical, strategic partnerships in all of recorded history," Pompeo said in Leipzig.

Pompeo said Trump's stance urging countries to live up to NATO commitments to spend 2% of gross domestic product on defense showed the alliance is "so central, so important" to the U.S.

"That is why it is an absolute imperative that every country participate and join in and contribute appropriately to achieving that shared security mission," he said.

Information for this article was contributed by Frank Jordans and David Rising of The Associated Press.