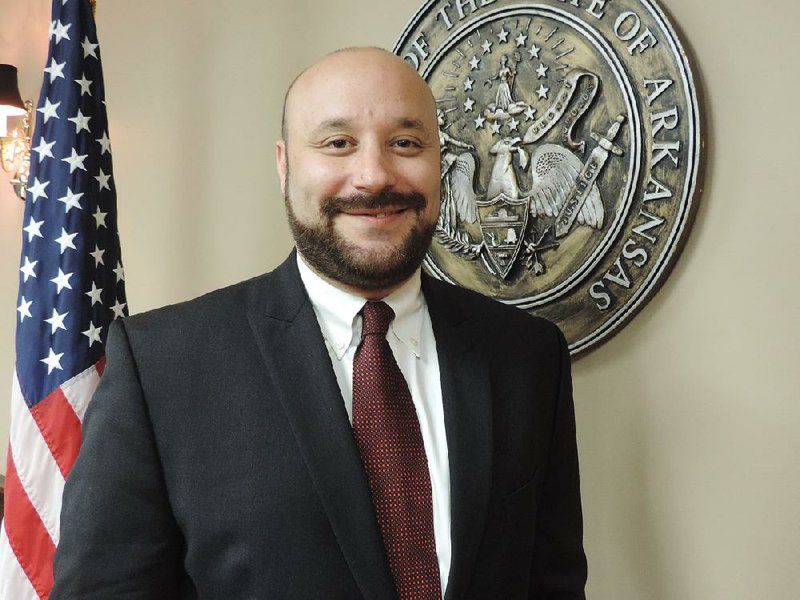 Lee Rudofsky is shown in this file photo.

The party-line vote was 51-41, with eight senators absent.

Rudofsky, who has served as Walmart Inc.'s senior director of its global anti-corruption compliance team, had the backing of Arkansas' two Republican U.S. senators: John Boozman and Tom Cotton.

An American Bar Association panel had ranked Rudofsky as "qualified" for the lifetime appointment.

In an interview, Cotton described Rudofsky, 40, as "very smart and very accomplished," noting that he and Boozman had both encouraged President Donald Trump to make the selection.

A native of New York City, Rudofsky is a graduate of Cornell University and Harvard Law School.

After completing his studies, Rudofsky clerked for a state judge in Massachusetts, later clerking for Judge Andrew Kleinfeld, an Alaskan serving on the 9th U.S. Court of Appeals.

Rudofsky subsequently worked for the Kirkland & Ellis law firm in Washington, D.C., before moving to Northwest Arkansas in January 2014.

Originally hired by Walmart as an assistant general counsel, he joined the staff of Arkansas Attorney General Leslie Rutledge in August 2015. After three years as the state's solicitor general, he returned to Walmart.

Last month, the Republican majority on the U.S. Senate Judiciary Committee had backed Rudofsky's nomination; the committee's Democrats were united in opposition.

In a floor speech Wednesday, Cotton predicted Rudofsky would bring to the bench "intelligence, character, and above all, a commitment to the rule of law and the administration of equal justice under the law."

Thursday, U.S. Sen. Patty Murray, D-Wash., argued against confirming Rudofsky, pointing to his support for sweeping abortion restrictions when he was Arkansas solicitor general. Rudofsky, she said, had also "worked against hard-fought progress for equality for LGBTQI people." (The acronym stands for lesbian, gay, bisexual, transgender, queer and intersex.)

"Does that sound like a judge who is going to protect the rights of women and others and who will put aside his own partisan notions to ensure equal protection under our laws for everyone? It does not," Murray said.

During his July 31 confirmation hearing, Rudofsky said he would follow Supreme Court precedent, including on abortion and marriage equality.

His past stances on those issues reflected the will of the people of Arkansas, he said, maintaining he had been a zealous advocate on their behalf.

During the hearing, Rudofsky also distanced himself from a February 2013 friend-of-the-court brief he had signed that challenged California's Proposition 8, a ballot measure that had stripped gay couples there of the right to marry.

Rudofsky also withdrew his support for a March 2015 brief challenging the constitutionality of same-sex marriage bans, telling the committee he had signed them in his "personal capacity," not as a lawyer.

"When I joined those amicus [friend-of-the-court] briefs, I was not an expert in 14th Amendment jurisprudence. Since then, as solicitor general, I've become much more familiar with that area of law and I have to say, if I had it to do over again, as a legal matter, I would not have signed those briefs," he said.

Rudofsky's record as solicitor general, combined with his about-face on same-sex marriage, fanned Democratic opposition, according to Carl Tobias, a University of Richmond School of Law professor who tracks judicial nominations.

"They were very critical of him on culture war kinds of issues which he might face," Tobias added.

During the judiciary committee hearing, "he had a tough time with the Democrats' questions, and they weren't really happy with his responses, either," Tobias added.

The number of Democratic no votes -- 41 -- would've been higher if they'd all shown up. Five of the six absent Democrats are 2020 presidential candidates.

Shortly after Thursday's vote, Lena Zwarensteyn of the Leadership Conference on Civil and Human Rights issued a written statement condemning the decision.

The conference is a coalition that includes the American Civil Liberties Union, Planned Parenthood, the NAACP, the Human Rights Campaign and numerous labor groups.

"Lee Rudofsky has made a career out of curtailing critical civil rights and protections. He has advanced an extreme right-wing agenda on LGBTQ rights, reproductive freedom, and racial justice, among other issues. Without a doubt, he is unfit for the position and will bring bias to the bench," Zwarensteyn said.

The state's attorney general, on the other hand, welcomed the confirmation.

"As the Solicitor General in my office, Lee demonstrated daily his legal acumen, intellect, adherence to the original intent of the law, integrity and impartiality," Rutledge said in a written statement. "I am confident he will be a fair and impartial jurist who will serve the people and our great nation well as a federal judge."

Federal district judges earn $210,900 per year. Unless they resign, retire or are impeached by the House and convicted by the Senate, they are entitled to serve for the rest of their lives.

Given Rudofsky's age, he is likely to remain on the bench for decades, Cotton noted.

"I'm very excited about now-Judge Rudofsky and the service he can render to the people of Arkansas for maybe 30 or 40 years. It's been five years since we had a judge appointed to this court, so this is a big milestone for the state," Cotton said. "I'm confident he will be an outstanding jurist who will protect the constitution and uphold the rule of law."

In a written statement after Thursday's vote, Boozman said Rudofsky's "long history of public service, extensive experience and exceptional legal reputation make him well-qualified to serve on the bench."

"I am confident that, as U.S. District Judge for the Eastern District of Arkansas, Lee will be a fair and thoughtful jurist who will interpret the laws as they are written," Boozman added.