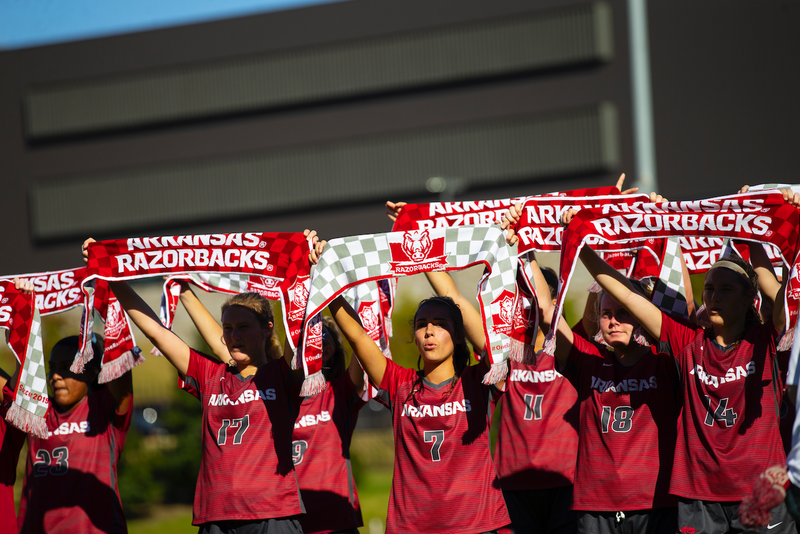 The Arkansas Razorback women's soccer team calls the Hogs at the end of the game against Georgia at Razorback Field in Fayetteville on Sunday, October 27, 2019. - Special to NWA Democrat Gazette David Beach

The top-seeded University of Arkansas defeated No. 5 seed Florida 3-1 in the semifinals of the SEC Soccer Tournament in Orange Beach, Ala., on Thursday to advance to the championship round for the fourth consecutive season.

Arkansas (16-2-2) will play No. 3 seed South Carolina in the championship game Sunday at 1 p.m. South Carolina advanced with a 2-0 victory over Vanderbilt on Thursday.

The Razorbacks finished one point ahead of the Gamecocks in the regular-season standings. The Gamecocks (15-1-3) handed Arkansas its only conference loss this season, 1-0 in Columbia, S.C., on Sept. 29.

Anna Podojil, the SEC freshman of the year, scored two goals after halftime Thursday to increase her season total to 14 goals, one off the SEC lead.

Podojil scored from 19 yards away in the 59th minute to put the Razorbacks ahead 2-0, and from about 30 yards on an open net in the 78th minute to extend the lead to 3-1.

"I thought we earned this one," Arkansas Coach Colby Hale said. "It was an intense game, and we lost our legs a little bit in the press, but I thought we grinded through it and did a great job."

Podojil's second goal came after she committed a penalty in the box that set up the only goal by the Gators (11-8-1). Vanessa Kara scored on a penalty kick in the 63rd minute to pull Florida within 2-1.

"We play hard, and those things are going to happen," Hale said of the penalty.

The Razorbacks had a goal by Reagan Swindall nullified in the 66th minute because of an offsides call, but Podojil got the goal back with a strong individual effort 12 minutes later.

Podojil stepped in front of Georgia Eaton-Collins' pass intended for Julia Lester, then turned and drilled a kick from well outside the box as Florida goalkeeper Susi Espinoza scrambled back toward the net. Espinoza dove to her left and got a touch on Podojil's long ball, but not enough to keep the grounder from going into the net near the far post.

Espinoza had come out of the box toward the sideline to play a long kick onto her side of the field and was out of position when Podojil gained possession.

"We just kept saying, 'If we're working the press half of the field, they'll give us a chance,' " Hale said. "They mess around with it in the back, and we thought they would give us one, and they did and she finished it great.

"A lot of people will take two extra touches, but I thought [Podojil] caught the goalkeeper off balance a bit."

The Razorbacks led 1-0 at halftime after scoring their first goal in the 41st minute off a corner kick from Cara Young.

Young's ball went over the crowd in front of the net and found Stefani Doyle behind the defense. Doyle put a left foot on the ball off the hop and placed it over the top of the leaping Espinoza.

"We could finally breathe after the final whistle blew," Lund told the SEC Network after the game. "We're really grateful to be going to the finals."

This is the sixth time Arkansas has advanced to the championship round of the tournament. The Razorbacks have been runner-up the past three seasons, and were runner-up in 1993 and 1996.