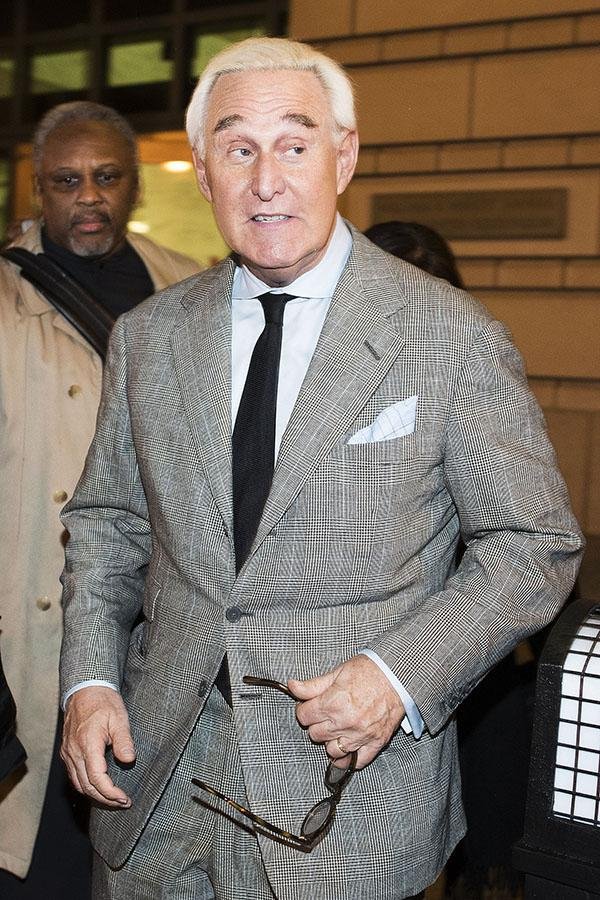 Roger Stone leaves the federal courthouse Thursday in Washington after the third day of his trial. More photos at arkansasonline.com/118stone/

WASHINGTON -- Roger Stone has long admired Richard Nixon, so much so that he even has a tattoo of the late president's face on his back. But on Thursday, federal prosecutors used a Nixon quote to help make their case against Stone, a longtime confidant of Donald Trump.

Prosecutors focused on a text exchange in which they say Stone used a Nixon quote to pressure an associate, radio host Randy Credico, not to give testimony that would contradict what Stone had previously told Congress.

Witness Michelle Taylor, a former FBI agent, detailed hundreds of Stone emails and text messages, many of them with Credico. Stone had told the House Intelligence Committee that Credico served as his back-channel contact with WikiLeaks founder Julian Assange; Credico denied it.

In November 2017, when Credico received a letter from the committee inviting him to a "voluntary transcribed interview," Credico reached out to Stone.

Stone responded with the following text: "'Stonewall it, plead the fifth, anything to save the plan...' Richard Nixon." The quote was from secret tapes revealed during the Watergate investigation.

Stone is on trial in federal court in Washington on charges that include lying to Congress to conceal his efforts to contact WikiLeaks for information on the Russian-hacked Democratic National Committee emails that the anti-secrecy group was releasing before the 2016 presidential election.

The charges stem from former special counsel Robert Mueller's investigation of Russian election influence. They include tampering with a witness -- Credico. Stone has denied any wrongdoing.

Thursday's testimony detailed the acrimonious collapse of the relationship between Credico and Stone.

Credico had hosted Assange on his radio show. Stone, under pressure from congressional investigators, named Credico as his intermediary to Assange. In interviews and public appearances, Stone had mentioned that he was in contact with Assange through a trusted intermediary and claimed inside knowledge of WikiLeaks' plans.

Credico accused Stone of getting caught up in his own public exaggerations, feigning back-channel connections to Assange that didn't exist and then naming Credico as that connection in order to maintain the story.

"You want me to cover you for perjury now," Credico wrote to Stone in one text exchange. "It was all bravado ... You never had a back channel."

Stone responded, "I guarantee you that you'll be the one who gets indicted for perjury if you're stupid enough to testify."

As the relationship deteriorated, Stone's responses descended into vulgar abuse and threats, as well as numerous references to Frank Pentangeli, a central figure in the movie The Godfather Part II.

In the movie, Pentangeli is a midlevel Mafia boss who plans to testify against the criminal godfather, Michael Corleone. At the last minute, under pressure that is never fully explained, Pentangeli reverses his testimony and sabotages the government's case. He claims before Congress that the FBI pressured him to make up stories and ensnare Corleone.

The exchanges between Stone and Credico include at least a half-dozen Pentangeli references, some of them misspelled or mangled by auto-correct so they appear as "Frank Pantsgele" or "Frank Cannon July 10."

Rogow appeared to be emphasizing the limits of the FBI's knowledge. For example, he cited an Aug. 18, 2016, email from Stone to senior Trump campaign official Steve Bannon that read: "Lots to do. Let me know when you can talk."

Taylor admitted that she didn't know if the pair had actually talked.