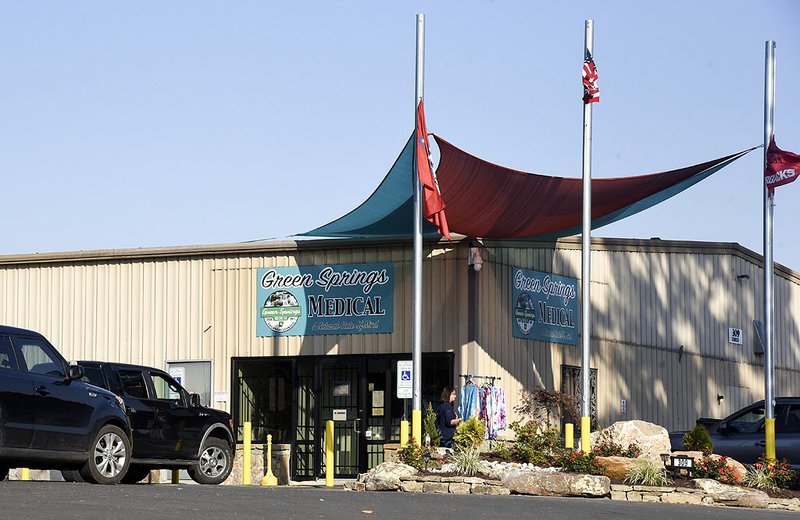 Green Springs Medical, Hot Springs' only licensed medical marijuana dispensary, has been at the center of a court battle between the owners.

HOT SPRINGS -- A judge ruled Monday that an associate who filed a lawsuit against the CEO of Hot Springs' only licensed medical marijuana dispensary has a 50% interest in the company, entitling him to half of the profits and an equal say in how the business is run.

Special Judge Ted Capeheart granted Bruce Simpson's request for a preliminary injunction, ruling that Simpson's business interest would be jeopardized if the court didn't intervene before making a final ruling on Simpson's claims. The dispensary application filed with the state Medical Marijuana Commission listed Simpson as security manager/vice chairman of Green Springs Medical LLC dispensary. The defendant, Dragan Vicentic, is listed as the CEO/chairman of the board and majority owner.

The complaint Simpson filed in September in Garland County Circuit Court said Vicentic has excluded him from profits, business decisions and access to business records.

Capeheart said in the Oct. 7 hearing on Simpson's injunction petition that Vicentic's attempt to remove Simpson from the company without his consent showed that Simpson's interests would be harmed if Vicentic weren't enjoined. The state Department of Finance and Administration confirmed that Vicentic contacted it regarding a change of ownership request. Alcoholic Beverage Control Division Director Doralee Chandler told him in an Aug. 6 email that he needed Simpson's consent to change the ownership structure.

The Department of Finance and Administration said Vicentic subsequently withdrew the request.

"There's no telling what'll happen at the corporation if there's not some supervision over him," Capeheart told Vicentic's attorney, Ryan Culpepper, according to a redacted transcript of the hearing obtained by The Sentinel-Record.

Capeheart warned that presenting to a jury the allegations and recriminations detailed during the hearing would be unbecoming for both litigants. The hostility could also affect a lucrative enterprise, he said. A sales report the Department of Finance and Administration issued Monday showed that Green Springs had accounted for more than a quarter of the 2,491 pounds of medical marijuana sold statewide through Sunday. Green Springs opened May 12, making it one of the first locations to sell marijuana legally in Arkansas.

The Department of Finance and Administration said the 10 dispensaries in operation accounted for $17.5 million in statewide sales.

"I'm gonna give you some advice that neither of you are gonna come off looking very good if this goes in front of a jury of 12 people from Garland County," Capeheart said. "There's no telling what they'll do ... If y'all keep going the way you're going, tattling on each other, the FBI and this and that and the other, the golden calf is going to melt on you. I would suggest y'all keep that in mind as this case progresses."

Capeheart did not grant Simpson physical access to the dispensary for fear of an altercation starting. He instead ruled that Simpson could have access through an intermediary to bank statements, sales and payroll reports, purchase orders, invoices and other business records. The order also said Simpson is entitled to half of past and future profits.

"I would say according to [the law], Mr. Simpson should be allowed to go on the premises, but I think I'd just be creating a storm," Capeheart said.

Capeheart said the 1993 law governing the formation and operations of limited liability companies entitles Simpson to half of the profits despite the dispensary application listing his ownership interest at 40%. The LLC act also requires Vicentic to get Simpson's consent before making decisions about the business, Capeheart ruled.