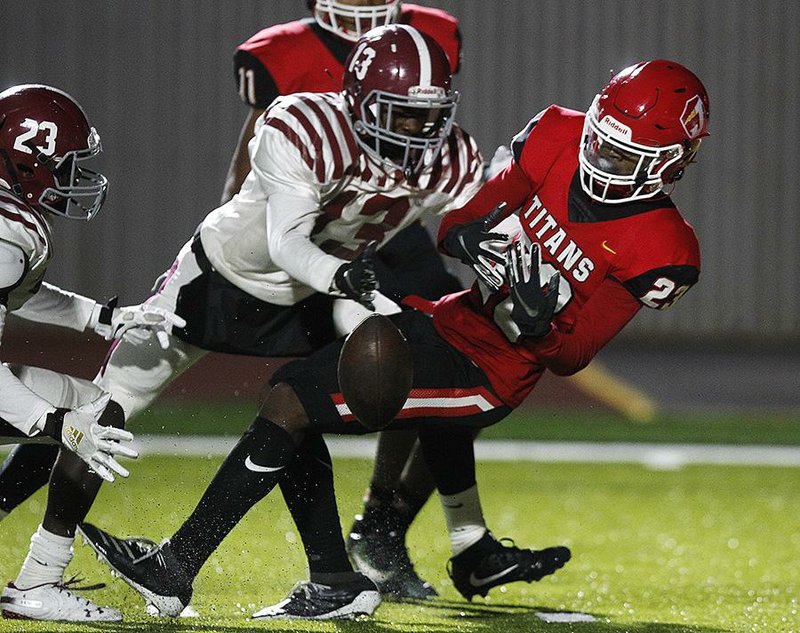 Pine Bluff took care of business and clinched a berth in the Class 6A playoffs, even without its starting quarterback, defeating Jacksonville 35-14 on Thursday night at Titan Stadium in the teams' 6A-East Conference finale.

Pine Bluff entered the game on a four-game losing streak and had not won since Oct. 4 at Mountain Home. But the Zebras forced two turnovers and won their third game of the season and second on the road.

The Zebras will travel to the 6A-West's No. 4 seed in a first-round game next Friday.

"We started off kind of slow, but we picked it up," Stinson said. "Hopefully, we can take a little momentum going into next week."

Pine Bluff took a 7-0 lead with 7:24 left in the first quarter on Howell's 30-yard touchdown pass to junior Rodney Thomas.

"It was a huge swing of momentum," Stinson said. "It was something we needed."

The Titans pulled within 14-8 with 7:37 left in the second quarter on Cobbs' 35-yard touchdown pass to senior Jason Bobo, followed by Bobo's two-point reception.

But the Zebras went into halftime with a 28-8 lead on senior Elisha Taylor's 7-yard touchdown run and Howell's 14-yard scoring pass to Taylor.

Jacksonville interim coach Jordan Johnston, who was promoted from offensive coordinator in July, had the Titans (3-7, 1-6) in position to make the Class 6A playoffs in the final week of the regular season. But a 14-0 deficit in the first half was too much to overcome.

"It's been like that a lot of the year," Johnston said. "We've been shooting ourselves in the foot with a lot of unforced errors. But that's what happens when you have a young team."

The Titans, who will move down to Class 5A for the 2020 and 2021 seasons, won their only conference game against Mountain Home on Oct. 11 at Jan Crow Stadium -- the last game at the team's former home before their new stadium opened Nov. 1. Johnston was proud of how his team responded to him from late summer into the season and hopes to remain as the Titans' permanent coach.

"When you're playing in the 6A-East, it's tough," Johnston said. "I'm not at all trying to make excuses. But getting this job in late July, I knew it was going to be tough. I got put in a tough situation. Our coaches tried to make the best out of it.

"If people can't see that we got better over the course of the year, I don't know what to tell them."