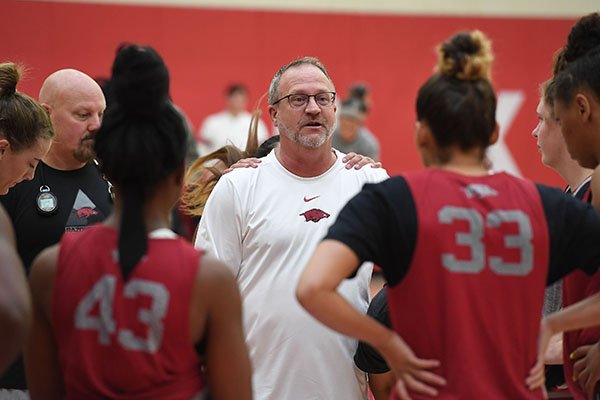 FAYETTEVILLE -- Lack of size was an issue for the University of Arkansas women's basketball team last season, but it might be a real problem in the season opener.

Kiara Williams, a 6-1 senior, and 6-3 freshman Destinee Oberg suffered undisclosed injuries earlier this week, which could keep them out of today's game against New Orleans, Arkansas Coach Mike Neighbors said. Tipoff is scheduled for 10:30 a.m. in Walton Arena.

NO. 22 Arkansas women vs. New Orleans

Neighbors acknowledged the Razorbacks have been undersized the past couple of seasons. Williams played in all 37 games a year ago and was the team's leading rebounder, averaging 6.6 per game.

"We'll probably play a little faster and have to play some zone defense," Neighbors said.

Neighbors saw good moments from his team in a pair of exhibition victories over Pittsburg State and Oklahoma City, but he acknowledged today's game will be different.

"We got tested and got exposed in a lot of areas, so it was good," Neighbors said. "It's exactly what we hoped for. If we can translate what we did good and clean up a little bit of the bad, I think we'll get off to a good start."

New Orleans opened the season with an 83-49 loss at LSU on Tuesday, but the Privateers have a real game under their belt, which puts them a little ahead of the Razorbacks, Neighbors said.

The Razorbacks are already garnering national attention. They are ranked No. 22 in the The Associated Press Top 25 poll, the first time they've been ranked since 2014.

Guard Chelsea Dungee has grabbed loads of preseason accolades, including being named to the preseason All-SEC first team. The 5-11 junior picked up where she left off in the two exhibition games, scoring 31 against Oklahoma City and 26 versus Pittsburg State.

More than 5,000 elementary schoolchildren will amp up the atmosphere in Walton Arena a little more, Neighbors said.

"You don't have to worry about energizing our kids, they get excited seeing them," Neighbors said. "It's a great way to kick the season off and a really cool tradition they've started."

The Razorbacks will miss Jailyn Mason, who has been sidelined with a foot injury. She played in 36 of 37 games a year ago and was second on the team in minutes played behind Dungee. The 5-9 senior averaged 7.9 points per game.

Mason is out of a walking boot, but she's at least a couple of weeks away, Neighbors said.

NO. 22 ARKANSAS WOMEN VS. NEW ORLEANS