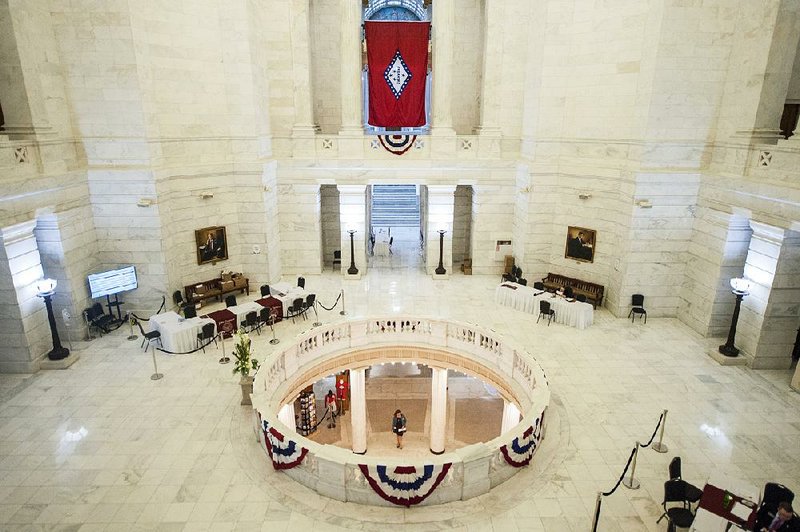 Thursday was the slowest day so far for candidate filings at the state Capitol. Today President Donald Trump’s representatives are to file for him, and an Arkansas Supreme Court candidate is expected to fill out paperwork. - Photo by Jeff Gammons

Candidates trickled out of the rain and into the state Capitol on Thursday in the slowest day so far of Arkansas' weeklong candidate filing period.

Gone was the pomp and enthusiasm of the first day of filing Monday, when 165 candidates filled out paperwork. Only 23 filed Thursday.

Most of those on the fourth day were incumbents, many of whom were already at the Capitol to attend afternoon legislative meetings.

One filing came all the way from California, even if the candidate did not.

[ARKANSAS ELECTIONS: Searchable list of candidates who have filed for office » arkansasonline.com/elections/2020candidates]

De La Fuente, who lives in San Diego, ran for president on the Democratic ticket in Arkansas in 2016, receiving 1,684 votes in the primary.

The Republican standard-bearer, President Donald Trump, is to have his paperwork submitted to the secretary of state's office at 11 a.m. today by Attorney General Leslie Rutledge and Trump's former press secretary, Sarah Huckabee Sanders.

"Arkansas was very important to President Trump's victory in 2016 and will be part of his winning strategy again in 2020," Tim Murtaugh, the Trump campaign communications director, said in a news release.

On the Democratic side, former U.S. Rep. John Delaney of Maryland filed for Arkansas' presidential primaries through a proxy.

On Thursday, the following legislative incumbents made their reelection campaigns official, setting up competitive races:

Sen. Stephanie Flowers, D-Pine Bluff, who gained social media fame earlier this year thanks to a video of her passionate speech against a "stand-your-ground" bill, filed for reelection. So did former Rep. Efrem Elliott, a Democrat from White Hall.

"I think the district needs a change in leadership, and I think that I am the person to commit to that change,"said Elliott, a former police officer who served in the House from 2011-13.

"We want a senator who will be responsive to the people in the district. We also want more opportunities in the district, and I think that I will be able to work across political lines to get the things that the district needs," he said.

Flowers disputed Elliott's suggestion that he would be more responsive and work better with Republicans.

"I think if people look at his record, I have never been removed from office. He has from a school board, so I think if you look at my record and compare it with his, I think people will see I am the better candidate," Flowers said.

Elliott said the state took over the Dollarway School District, on whose board he served several years ago, "so the whole School Board was removed, and that had nothing, specifically, to do with me."

Glover filed a day after former Rep. Mark McElroy of Tillar filed as a Republican candidate for the same seat.

McElory served in the House as a Democrat from 2013-19 and then lost for reelection a year ago as an independent candidate in a three-way race that Glover won.

"We had a good relationship throughout the race last year," Glover said, adding that he hopes that isn't any different, "including the outcome."

McElroy described his race as an "uphill battle" but added that "people that traditionally voted Democrat are going Republican" in the Delta.

In the 2018 general election, Glover won the House seat with 3,609 votes, ahead of McElroy's 2,495 votes and Republican Ricky Lattimore Sr.'s 2,092 votes, according to the secretary of state's office.

Rep. Sonia Eubanks Barker, R-Smackover, filed for her third term Thursday, saying she is running to be "another pro-life, pro-Second Amendment, pro-business, pro-Arkansas vote and voice."

Late Thursday afternoon, Adrienne Woods of Rogers filed as a Republican for the House District 94 seat, which is being vacated by Rep. Rebecca Petty, R-Rogers. John Carr, another Rogers Republican, has also filed for the seat.

Woods, an attorney who owns a spin and barre studio, was accompanied by her husband, two children and state Auditor Andrea Lea. Woods had helped Lea with past campaigns. Woods said she decided to run for office because more women, mothers and people in her age bracket need to hold public office.

Tony Furman, a Republican from Benton, filed to run in House District 28, an open seat created when Rep. Jasen Kelley, R-Benton, announced recently that he would not run for reelection.

Furman said he "lived in Saline County since middle school," and did not want to talk about the residency of the other Republican candidate in the race, Marietta McClure.

McClure, who filed Monday to run in House District 28, changed her voter registration precinct from District 23 to District 28 on Oct. 31, according to the secretary of state's office.

McClure said Wednesday that she and her husband signed a contract on a house in District 28 in August, and the house is under contract for closing next month. "We took possession under a lease, effective Oct. 31, 2019.

"I talked with an attorney, and I meet all the residency requirements," she said.

Little Rock Democrat Joy Springer on Thursday became the second candidate to file for the House District 34 seat, which had been held by the late Rep. John Walker, D-Little Rock, for the regular 2020 election.

Springer, who worked for Walker's law office for 28 years, said she decided to run for the House because "I need to carry on his legacy." She recalled that Walker had urged her to consider running for the House seat once he could no longer seek reelection.

"I never did tell him or make up my mind at the time we were talking," she said. "I said, 'Well, I am going to think about it.'"

Ryan Davis, who is director of the University of Arkansas at Little Rock's Children International, said Tuesday that he plans to announce his bid for the House seat soon.

While no Republicans have filed for the seat, the winner of the primary may face Roderick Talley, who filed as an independent candidate for the seat Tuesday.

Earlier this year, Talley had been a candidate to fill a vacancy for a different House seat, the nearby 36th. However, legal battles stemming from several arrests dogged his candidacy, and he ended up finishing fourth out of five candidates. He said he has since moved into House District 34.

Gov. Asa Hutchinson has set a special primary election on Jan. 14 for the House District 34 seat and a special election for March 3 under a proclamation that he signed Monday. If a special runoff election is required in District 34, it will be held Feb. 11.

The special election will fill the House seat until the term ends in mid-January 2021.

March 3 also is the date of the statewide primary elections, followed by the statewide general election on Nov. 3, for all House seats, with two-year terms starting in January 2021. The regular elections also will be for some state Senate seats, local races, judicial seats, Congress and president.