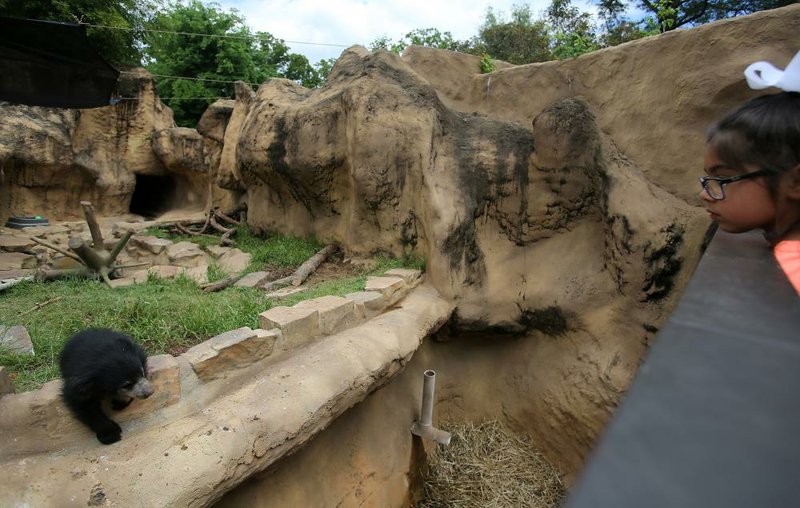 Arkansas Democrat-Gazette/THOMAS METTHE -- 5/12/2019 -- Sunday at the Little Rock Zoo kicked off Bear Awareness Week and mark the third birthday of the cheetahs, Oscar and Boomer. - Photo by Thomas Metthe

A city task force is considering ways to generate more funding for a bigger and better Little Rock Zoo.

The group will consider recommending to the city Board of Directors either a referendum or a shift to private management to increase revenue.

The zoo developed a master plan in 2014 but now, five years later, Mayor Frank Scott Jr. has appointed the task force to scrutinize the plan, and make facilities and funding recommendations to the city board by the year's end.

The master plan envisions renovations that would take about $90 million to $100 million over 10 years to implement, Zoo Director Susan Altrui said. That means the zoo would need at least $10 million annually and is "currently underfunded," she said.

"As we start to invest more in the zoo, revenues will go up," Altrui said.

A draft of Little Rock's 2020 budget allots about $6.6 million for the zoo, which also has the support of a foundation.

One option to increase funding is to ask voters to approve a referendum that would generate $25 million to $50 million annually for the zoo, as well as for the Parks and Recreation Department, Altrui said.

The other option is a shift to private management, which is becoming more common in zoos across the country. Consultant Rick Biddle, who has worked with the zoo for several years, said cities such as Dallas, Detroit, Atlanta, Houston and Tulsa have seen increases in attendance and revenue that way.

The Little Rock Zoo previously has considered moving to private ownership. A planning committee for the zoo discussed the idea when it convened in 2010, the Arkansas Democrat-Gazette previously reported.

This time around, the zoo has the opportunity to expand its grounds over a three-hole portion of the former War Memorial Park Golf Course, which sits north of the zoo and east of Fair Park Boulevard.

The War Memorial Golf Course, along with the Hindman Park Golf Course, ceased operations in June because of city budget cuts. A separate task force that was convened to study new uses for the freed-up green space in the two parks is on board with letting the zoo expand into War Memorial Park, Altrui said Thursday.

The zoo receives 300,000 visitors annually. Only 25% of them are from Little Rock, but few guests drive more than two hours to visit, Altrui said.

The last time the zoo saw a spike in attendance was when a penguin exhibit opened in 2011, she said.

To determine what the next "home run" exhibit might be, the zoo conducted a survey in August that asked people what they wanted to see. Top results included a giraffe exhibit with a feeding deck, a new sloth bear habitat, and an "aquatorium" featuring fish and a touch tank for rays and other species.

Members of the task force also reviewed the findings of their younger counterparts -- another task force made up of children ages 7-11 that met twice in September. Zoo educator Michael Gates said the things children wanted more of included giraffes and parallel play.

Parallel play is a term for exhibits that allow children to play like animals do alongside their habitats. Examples include monkey bars and climbing structures near a primate exhibit or a slide near the otters.

"All the kids wanted a zip line through the zoo," Gates said.