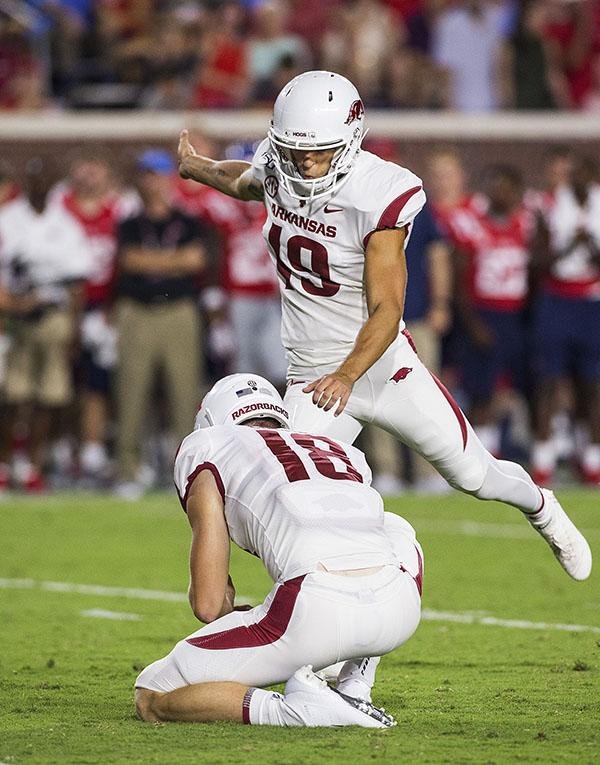 Arkansas senior Connor Limpert was named one of 20 semifinalists Thursday for the Lou Groza Award, which is given annually to the nation’s top kicker. Limpert has made 12 of 15 field-goal attempts, including a 54-yarder against Colorado State on Sept. 14. - Photo by Ben Goff

FAYETTEVILLE -- University of Arkansas senior placekicker Connor Limpert was selected as one of 20 semifinalists Thursday for the Lou Groza Award, which is given annually to the nation's top kicker.

Limpert, of Allen, Texas, is a Groza semifinalist for the second consecutive year. He is 12 of 15 on field goals, 24 of 24 on PATs and has made 6 field goals from 40-plus yards, including a 54-yarder against Colorado State on Sept. 14. Limpert has made all seven of his field goal tries from 40 yards or closer.

He ranks seventh in career field goals at Arkansas with 39, and his current career field goal conversion rate of 81.3% would be a school record. Limpert is one of 17 seniors who will play his final game at Reynolds Razorback Stadium on Saturday against Western Kentucky.

Limpert is also a nominee for the Burlsworth Trophy, which is given annually to the nation's top player who began his career as a walk-on.

Mississippi State became the sixth Arkansas opponent to score on its opening drive of the game, and the fourth to score a touchdown against the Razorbacks.

Colorado State, San Jose State, Auburn and Mississippi State all scored opening-drive touchdowns, while Portland State and Alabama notched a field goal with their first offensive series against the Hogs.

Ole Miss, Texas A&M and Kentucky did not score on their opening series against Arkansas.

By contrast, Arkansas has scored on its opening possession in just three of nine games. Connor Limpert hit a 34-yard field goal at the 9:40 mark of the first quarter against Portland State, Trey Knox caught a 24-yard touchdown pass from Nick Starkel at 13:00 against Colorado State, and Rakeem Boyd had a 74-yard touchdown run at the 14:18 mark at Kentucky.

The 6-4, 230-pound junior also has 17 tackles for 92 lost yards and 13 quarterback hurries, all of which lead Conference USA.

Western Kentucky Coach Tyson Helton, the son of former University of Houston Coach Kim Helton, has worked his way through the ranks to reach his first head coaching job. Helton, 42, a quarterback at Houston (1996-99) under his father and the younger brother of Southern Cal Coach Clay Helton, began his coaching career as a graduate assistant at Hawaii and moved on to jobs at Memphis, Alabama-Birmingham, Cincinnati, Western Kentucky and USC before working at Tennessee in 2018 as offensive coordinator and quarterbacks coach.

Kim Helton, a Florida graduate, has coached at Florida, Miami and Alabama-Birmingham as an assistant, worked with four NFL teams and one Canadian Football League team, and was head coach for the Houston Cougars from 1993-99. He is currently an offensive analyst with the Hilltoppers.

Arkansas defensive tackle McTelvin Agim, who leads the team with 8.5 tackles for loss, is on a streak.

Arkansas and Western Kentucky both rank among the worst 15 teams in the nation in turnover margin.

The Razorbacks are tied for 116th with Connecticut and Virginia with a minus-6 margin that comes to minus-0.67 per game. Western Kentucky is tied for 121st at minus-1 per game.

"It's been different stuff," said Storey, adding that lower turnover counts were "a big reason why we were winning.

"That's what we've got to get back to. Sometimes stuff is going to happen, and we've got to bounce back better."

Arkansas will face its third first-time opponent this season when it hosts Western Kentucky on Saturday. The Razorbacks split games against their other first-time foes, downing Portland State 20-13 in the season opener and falling 31-24 to San Jose State on Sept. 21.

Arkansas' 17-game SEC losing streak is not currently the longest for a team in a Power 5 conference.

Rutgers has lost 18 consecutive Big Ten games entering its home game Saturday against Ohio State, which is No. 1 in the College Football Playoff rankings.

The forecast for Saturday at Reynolds Razorback Stadium is sunny and clear with a temperature of 51 degrees and climbing at kickoff.

Print Headline: Limpert 1 of 20 up for award