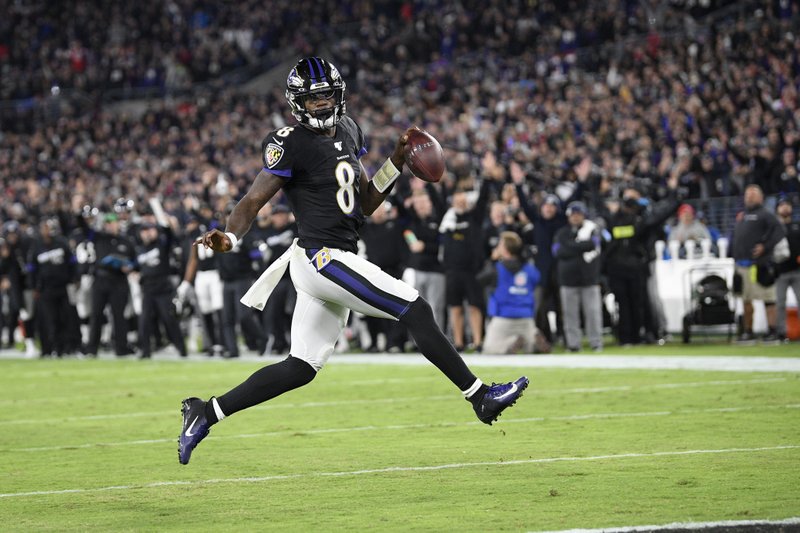 Baltimore Ravens quarterback Lamar Jackson scores on a run against the New England Patriots during the first half of an NFL football game, Sunday, Nov. 3, 2019, in Baltimore. (AP Photo/Nick Wass)

Lamar Jackson is going to juke his way into the record books if he keeps running like this.

The second-year quarterback has 637 yards rushing through eight games and is on pace to break Michael Vick's single-season record of 1,039 yards set in 2006. No other quarterback has run for 1,000 yards in a season. Jackson is on pace for 1,274 yards.

It's no surprise the Baltimore Ravens have the NFL's best run offense thanks to Jackson's team-high total. Mark Ingram is second with 585 yards. The Ravens are averaging 204.9 yards on the ground per game. No NFL team has averaged at least 200 yards rushing per game since Walter Payton helped Chicago do it in 1977.

Jackson also leads the league with an average of 6.4 yards per carry. He has three 100-yard games this season. Le'Veon Bell, Todd Gurley and LeSean McCoy have combined for zero.

STAFFORD SLINGS: Matthew Stafford became the first quarterback in NFL history to reach 40,000 yards passing in fewer than 150 games. He has thrown for at least 300 yards and three touchdowns in each of Detroit's last three games. He has 22 such games in his career. Only Aaron Rodgers (31), Drew Brees (27), Dan Marino (26) and Kurt Warner (23) had more in their first 150 games.

PROLIFIC RECEIVER: Mike Thomas needs six receptions in New Orleans' game against Atlanta to become the fastest player to reach 400 receptions in league history. Thomas has played 55 games. Odell Beckham Jr. reached 400 in 61 games, the fastest to do so far.

PACK SACK ATTACK: The Packers are the only team with two players who have at least eight sacks. Za'Darius Smith (8.5 sacks) and Preston Smith (eight) lead the way.