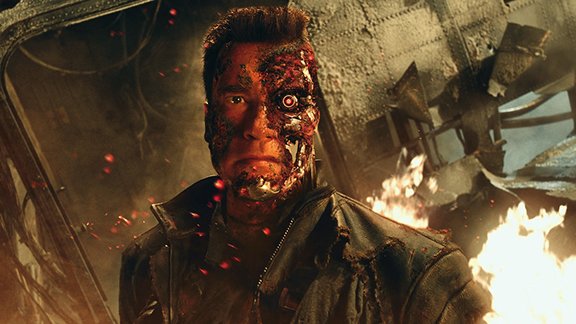 Arnold Schwarzenegger agreed to defer part of his salary for Terminator 3 in order to prevent the production from moving from Los Angeles to Vancouver, British Columbia. Some saw this as the first step in his subsequent campaign for governor of the state, in which he emphasized giving incentives to have movie productions stay in California, rather than film in less-expensive places elsewhere.

It's perhaps Arnold Schwarzenegger's most famous role, a killer cyborg sent from the future to either kill or protect John Connor, leader of the resistance. We got a new entry in the Terminator franchise last week, one with Linda Hamilton nonetheless.

And while this one looks to have decent reviews as I write this, I think it's worth looking back at a couple of Terminator sequels that get way too much hate.

Everyone seems to agree that the first two Terminator films are some of the greatest science fiction films of all time. But what fans seem split on is which of the two is the most superior. And I'll settle that right here and now. T2 is superior to the original, just as Aliens is superior to Alien.

It's not that the original Terminator and Alien are bad movies. They're fantastic. But if I have a bowl of popcorn on a lazy Saturday afternoon and the choice between the first movies in those series or their immediate sequels? I'm going to pick T2 and Aliens every time. Why? They're perfect action movies.

It's what James Cameron did back then. He took something great and injected even more action into it, making the movie better. Here's the timeline. Ridley Scott's Alien came out in 1979. Cameron released The Terminator in 1984. Both were great movies, but they could be better.

And in 1986, Cameron told Scott, "Hey, you've got something pretty cool here with this xenomorph. But what if we made a swarm of them, a queen and a cute little girl for Ripley to rescue at the end?" Then he went and made Aliens, the superior film. And for those who disagree, try to remember some memorable quote from the original. Difficult, huh?

Now, try and remember quotes from the sequel. "Game over, man! Game over!" and "Get away from her, you bitch!" That's how you know it's a superior movie. And it's the same for T2. Sarah Connor isn't the same scared little girl from the first one. Now, she's tough as nails and has to escape an asylum. And Arnold is back, but twist! This time, he's a good machine, who rides a motorcycle and shoots at evil machines with a shotgun. Cameron one-upped himself with T2.

Of course, after the first two movies, the franchises distance themselves in quality and storytelling. James Cameron did not return to direct T3 and T4. Ridley Scott didn't return to direct Alien 3 or Alien Resurrection. And there's a noticeable drop in quality with all of those sequels.

But while the Alien sequels deserve every ounce of hatred they get (especially Alien 3) Terminator 3: Rise of the Machines and Terminator: Salvation do not deserve the enmity they get. They're passable entries in the franchise.

(I remember when T3 was released back in 2003, the year Arnold became governor of California, people started calling him the "Govinator." Good thing that never got old.)

Between the two sequels I'm writing about, T3 is the easiest movie to defend. It should have been much much worse given the development Hell it languished in for more than a decade. No Linda Hamilton as Sarah Connor. No Edward Furlong as John Connor. No James Cameron in the director's chair.

And in spite of all those things, we got a decent Terminator flick. We got our first female Terminator in Kristanna Loken, who played a solid villain. Maybe her performance isn't quite up there with Robert Patrick's as a Terminator from the previous film, but in her defense, those are huge shoes to fill. Loken played a fantastically chilled villain.

T3 has some solid action scenes, too. The graveyard scene where the Terminator carries John Connor out in a casket? Sweet. But the greatest scene of all is the extended highway chase where Loken's Terminator drives a freaking mobile crane to chase after John Connor and Kate Brewster.

Surprisingly, the movie gave us some solid humor as well. Arnold going into the strip bar and demanding clothes from the male dancer on stage? I laugh every time. It's an excellent twist on the previous movies where a terminator appears naked from the future (because they can't transport clothes for some reason) and has to find something that fits. Watching Arnold put on the star sunglasses? Great stuff. Arnold angrily shopping at the gas station and then telling the angry cashier to "talk to the hand" before shoplifting? Beautiful.

Watching the Terminators fight each other is fantastic, and when Arnold gets taken over and has to fight against his programming to avoid killing John Connor? Great scene.

Topping everything off, I have to give this film points for having the guts to actually end with the bad guys (Skynet) winning as John Connor and Kate Brewster wait out Judgment Day in the fallout shelter. How many movies have the stomach for letting evil triumph? Of those that do, how many have the script to do it without being too cheesy? T3 was never going to be in the same league as T2. But it's still a worthy entry in the franchise.

Terminator Salvation gets a little harder to defend, but hear me out. This sequel takes the Terminator story where it needed to go. After three movies where a murder machine comes back to the past to kill someone important, the series needed to finally take audiences to said future.

And that's what Terminator Salvation accomplished. It successfully built the world we were promised in the opening scene of T2, Los Angeles in 2029, killer machines roaming free, and giant piles of human bones after the nukes blew up every major city on the planet.

We're given a kickass John Connor in Christian Bale, who really channels his inner Batman for the role. The story cleverly introduces a young Kyle Reese who will eventually travel back in time to save Sarah Connor. And we get this cool cyborg Terminator progenitor played by Sam Worthington back when Hollywood thought he was going to be a great action hero after Avatar.

I'll freely admit this movie is worse than any Terminator films that came before it. But I still enjoy it because this film gave me the future world I wanted to finally see, humanity on the edge of extinction, a desperate resistance fighting against Skynet, the origin of the Terminators, and a badass John Connor who could go toe-to-toe with the machines and finally do some damage.

This wasn't a little brat version of John Connor from T2, ripping off ATMs to hit the arcade. This isn't semi-whiny John Connor from T3 who still needed to grow into the role of hero. This is it. Here is John Connor, the man everyone in the future places their hopes on to defeat Skynet. And if that wasn't enough, the movie gave us a really cool scene with John listening to recorded tapes from his deceased mother that actually have the voice of Hamilton on them.

The story gets a little muddled at times, and yeah, the ending with the field hospital heart transplant is goofy. But overall, I still like this movie. It's a masterpiece compared to the carpet stain that is Terminator Genisys. There is no redemption for the fifth Terminator entry.

But I have faith in Terminator: Dark Fate. Why? It reunites Arnold with Linda Hamilton and Edward Furlong. And at least with this one Cameron has a little bit of a guiding hand as a producer.

The trailers show me battle-scarred Linda Hamilton, now 63, blowing Terminators up on the interstate. I'm sold. I want to see older grizzled Sarah Connor. She was a spitfire in T2. Imagine how cool she'll be now after the world has weathered her even further.

Print Headline: In defense of Terminator 3 and Salvation