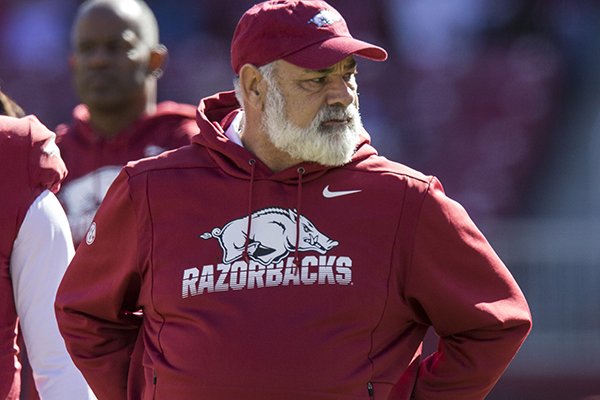 Arkansas defensive coordinator John Chavis is shown prior to a game against Mississippi State on Saturday, Nov. 2, 2019, in Fayetteville. - Photo by Ben Goff

FAYETTEVILLE -- The University of Arkansas defense looked uninspired while missing 20 tackles and giving up 640 yards in last week's 54-24 loss to Mississippi State.

Perhaps a visit from ex-Razorback quarterback Ty Storey and the Western Kentucky Hilltoppers this weekend will put a little zip in their hips.

The Hilltoppers (5-4) have bowl eligibility in their immediate sights with Storey, a two-time state champion at Charleston, holding the reins of the offense for what would be a seventh consecutive start.

Arkansas (2-7) would like to snap a six-game losing streak and expunge the memories of allowing 460 rushing yards to Mississippi State, including 234 from SEC player of the week Kylin Hill.

"I just didn't think we showed up today really," senior linebacker De'Jon Harris said Saturday. "I don't know what's going on. I just have to watch the film for myself, but we just weren't in the right position sometimes, just didn't make tackles and didn't execute the game plan really."

"Obviously, didn't see this thing coming the way it did," Chavis said. "When you take a look at how we played on defense, it's not very good. Matter of fact, it's terrible. I'm disappointed in the results of the game. We certainly could have and should have played better, and all that's on me."

Some of it could be attributed to injuries to an already thin position group such as the defensive line, and the growing pains of one of the nation's youngest defenses.

Chavis said the Hilltoppers are expected to start eight or nine redshirt juniors while the Razorbacks have five or six true freshmen who are starting or playing substantial snaps.

"That's 18-year-olds versus 22-year-olds," Chavis said. "That makes a difference. That's all I'm going to say because I'm not an excuse-maker.

"It falls on me, and I've been in college coaching for 42 years and I've never been in front of anybody and made an excuse and I'm not going to start today."

The Hilltoppers present a pass-heavy attack that ranks 47th with 252.8 passing yards per game and 26th with 65.4% completions. Storey is ninth with 69.8% completions.

"They do a great job in controlling the ball," Arkansas Coach Chad Morris said.

Western Kentucky is 23rd nationally in time of possession with an average of 32:16 per game.

"They want to throw the football," Chavis said. "They've got three receivers that have been around there for four years, and they do a good job of running routes and catching the football."

The veteran wideouts are 6-1 senior Lucky Jackson, 6-3 senior Quin Jernighan and 5-9 junior Jahcour Pearson. All of them have redshirted.

"What they do, Ty does a really good job of getting the ball underneath to receivers, passes out in the flats," Morris said.

"We've just got to really get off the ball, get our hands up and bat down a lot of passes," Arkansas defensive end Jamario Bell said. "They kind of throw a lot of quick-game things, so we've got to go ahead and get our hands up. Some way to affect Ty."

Gaej Walker has 169 carries for 783 yards and 6 touchdowns, while Storey is second on the team with 99 rushing yards and 4 touchdowns.

Agim chuckled when asked about finally getting a chance to hit Storey after years of practicing against an off-limits Storey at Arkansas.

"Ty's a cool dude, man," Agim said. "I spent three of my years with him, so I know he's a competitor. You just have to get ready for Western Kentucky, the whole entire offense. It's not just Ty. He has great receivers around him, a great offensive line, a good running back as well."