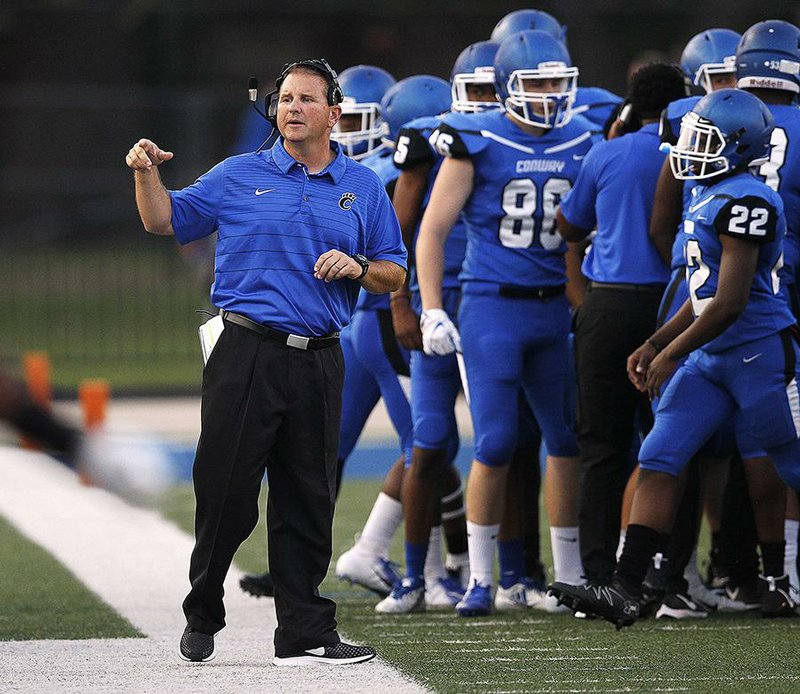 Conway Coach Keith Fimple (left) said the first six games of 7A-Central play prepared the Wampus Cats for what’s at stake tonight against Bryant. “We talk about big games every Friday night. It’s just another one for us,” Fimple said. - Photo by Thomas Metthe

The 7A-Central Conference's No. 1 seed will be decided tonight.

Tonight's winner is the No. 1 seed.

A Conway victory will give the Wampus Cats a share of the 7A-Central title, but they'll be the No. 1 seed with the head-to-head victory.

Conway Coach Keith Fimple said the first six games in the 7A-Central this season have prepared the Wampus Cats for what's at stake tonight.

"We talk about big games every Friday night," Fimple said. "It's just another one for us. I tell people, if you want to watch a good football game, go watch a game in the 7A-Central. There's great coaching and great athletes in the conference."

Bryant Coach Buck James is excited to play for a conference title in the final week of the regular season.

"It's going to be big," James said. "We're fixing to get a different Conway team from what everybody else has gotten. They've been playing their guts out. They have a chance to win a conference championship on their field.

"It's a tall order. They've got a good football team. They've competed well against everybody else they've played."

The Hornets are coming off a 35-21 victory over North Little Rock last Friday. Junior quarterback Austin Ledbetter threw five touchdown passes and the Hornets' defense forced five turnovers, two of which led to the offense's final 14 points that broke a 21-21 third-quarter tie.

Bryant has not won an outright conference title since 2013. The Hornets have been a No. 2 seed in James' first three seasons with the program, falling short of North Little Rock in 2016-18 in the regular season.

A victory tonight assures the Hornets of a top seed, which is a goal for James.

"Our kids have understood what it takes to fight for a championship," James said.

Fimple said Bryant is deserving of the credit it has received this season, with it being the No. 1 team in the Arkansas Democrat-Gazette overall top 10 and Class 7A.

"Coach James and his staff have done a great job," Fimple said. "They've earned every bit of it.

"They've got great leadership, a great quarterback, and great athletes on offense and defense. It's a testament to their coaching staff and their community."

Offensively, it's been a balanced effort for Conway.

Running backs Manny Smith, Jamaal Bethune and Bryce Bohanon have been solid in the backfield.

Bryant has outscored its opponents 420-86 and held its opposition to 14 points or less in every game before last week.

Although the Hornets have been able to sit their starters in the second half for most of the season, James isn't resting on his laurels.

"We practice to play four quarters," James said. "Our focus has to be as long as it takes to impose our will on whoever we play."

Fimple said a conference title would reward his players.

"I want it for my kids and for the work they've put in," Fimple said. "Their time is right now."