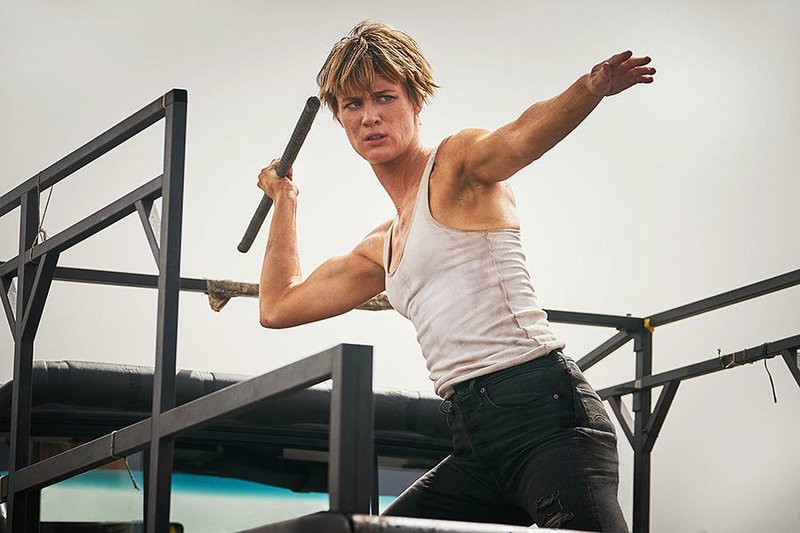 Mackenzie Davis is among the cast of Paramount’s Terminator: Dark Fate, the sixth entry in the Terminator franchise. It won last week’s box office, opening in first place with $29 million.

LOS ANGELES -- While Paramount's Terminator: Dark Fate won the box office last weekend, opening in first place with $29 million, the result is well below analyst projections of $35 million to $40 million, according to estimates from measurement firm Comscore. The previous series installment, Terminator Genisys, also opened poorly, with $27 million in 2015, and on an extended Fourth of July weekend.

The overall box office took another hit, down 20.9% from the same weekend a year ago, when Bohemian Rhapsody opened with $51 million. The year-to-date is now down 5.2% from 2018.

The $185 million Dark Fate is the sixth entry in the Terminator franchise and the third attempt to revive the series in a decade. Although the sequel generated buzz at Comic-Con for being the first entry since 1991's Terminator 2: Judgment Day to reunite series creator James Cameron and stars Linda Hamilton and Arnold Schwarzenegger, moviegoers failed to turn up for it.

"The box office fate of many long-running franchises has been mixed," said Paul Dergarabedian, a senior media analyst at Comscore. "Some rely heavily on their box office outside of North America to recoup their often sizable production costs. Terminator: Dark Fate has been embraced by the fans and has enjoyed solid reviews, so it could enjoy long-term playability in the coming weeks.

"The current marketplace is extremely crowded and competitive, and Joker has become such an unbelievable long-running juggernaut that it has essentially cut into almost every other new film's audience and has dominated the fall movie season in a way that could not have been predicted just a couple of months ago."

Dark Fate was also reportedly plagued with production problems, including a bloated budget, script problems, creative battles between Cameron and director Tim Miller (Deadpool) and a set that went dark for days.

In second place, Warner Bros.' Joker continued its autumn success, adding $13.9 million in its fifth weekend for a cumulative $299.6 million. Globally, the movie stands at an impressive $934 million.

At No. 3, Disney's Maleficent: Mistress of Evil added $12.2 million in its third weekend for a cumulative $84.3 million.

Directed by Kasi Lemmons (Eve's Bayou), the picture stars Cynthia Erivo as the titular freedom fighter. It was well-received, with an A-plus CinemaScore and a 73% fresh rating on Rotten Tomatoes.

Rounding out the top five, United Artists/MGM's The Addams Family added $8.5 million in its fourth weekend for a cumulative $85.3 million.

At No. 7, STX Entertainment's Countdown added $5.9 million in its second weekend for a cumulative $17.8 million.

In eighth place, Columbia's Black and Blue added $4.1 million in its second weekend for a cumulative $15.4 million.

At No. 9, Warner Bros. opened the crime drama Motherless Brooklyn with $3.7 million, well below analyst projections of $10 million.

Edward Norton serves as writer, director, producer and star of the $26 million movie, an adaptation of Jonathan Lethem's novel about a '50s-era private investigator with Tourette's syndrome who is on the hunt to solve his mentor's killing.

The $50 million movie features Jeremy Renner as the voice of Swifty the Arctic fox, a mailroom delivery service worker. John Cleese, Anjelica Huston, James Franco, Heidi Klum and Alec Baldwin also lend their voices to the picture, which earned a B-minus CinemaScore and did not screen for critics.

Also new last week was Martin Scorsese's crime drama The Irishman, which Netflix released in eight locations in New York and Los Angeles. The streamer does not report its box office grosses.

Starring Robert De Niro, Al Pacino and Joe Pesci, the 3.5-hour mob drama cost $160 million to $200 million to produce. It boasts a 97% fresh score on Rotten Tomatoes and will debut on the streaming service on Nov. 27.

Limited releases continued to do well, including Neon's Parasite, which added $2.6 million in its fifth weekend for a cumulative $7.5 million.

Fox Searchlight's Jojo Rabbit added $2.4 million across 256 locations (up from 55) in its third weekend for a cumulative $4.3 million.

A24's The Lighthouse added $2 million in its third weekend for a cumulative $7 million.

101 Films' The Current War: Director's Cut added 60 locations and $1.2 million in its second weekend for a cumulative $5 million.