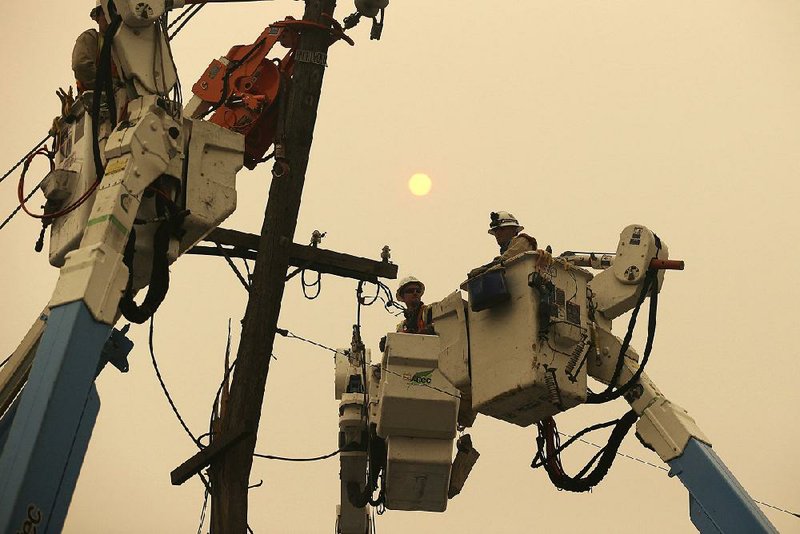 Pacific Gas and Electric Co. crews work last November to restore power lines in Paradise, Calif., after one of the utility’s power lines ignited a wildfire that ravaged the town.

Pacific Gas and Electric Co., the California utility that went bankrupt in January after its equipment sparked deadly wildfires, said Thursday that it's facing as much as $6.3 billion in after-tax costs in this year alone from the blazes, its Chapter 11 case and the recent blackouts.

The San Francisco company reported a $1.6 billion loss for the third quarter. It was driven by $2.5 billion pretax charge for claims related to the 2017 Northern California wildfires and the deadly 2018 Camp fire, the company said in a statement Thursday. Pacific Gas and Electric is not providing 2019 earnings guidance.

"Obviously it's a big write-down," Bloomberg Intelligence analyst Kit Konolige said. "The key remains how the bankruptcy will get resolved."

The earnings are the first the utility has reported since its extensive blackouts last month intended to keep power lines from sparking wildfires during windstorms, which drew anger from state lawmakers and raised the specter of a government takeover. Despite the shutoffs, blazes continued to spark. The utility's equipment has been identified as a possible cause of at least three.

The biggest of those blazes, the Kincade fire in Sonoma County, began Oct. 23 shortly after Pacific Gas and Electric equipment malfunctioned in the area. It took two weeks to fully contain. While the cause has yet to be determined, it's "reasonably possible" the company will incur a loss related to the blaze, the utility said in a filing Thursday. "The utility could be subject to significant liability in excess of insurance coverage," the Pacific Gas and Electric said.

California officials and residents have expressed growing anger over the blackouts, which have left those without power struggling to keep cellphones charged, find gas and withdraw cash. Businesses and schools were closed for days.

The prospect of more wildfire liabilities is critical for the utility. Since filing for Chapter 11 in January, the judge overseeing its case has warned another big blaze blamed on its equipment would upend the bankruptcy and potentially wipe out shareholders.

Pacific Gas & Electric is estimating it will cost the bankrupt utility $65 million to credit the 738,000 customers whose power was shut off last month.

The company disclosed the figure as part of a quarterly earnings report announcing it lost $1.6 billion from July through September.

Under pressure from California Gov. Gavin Newsom, the company agreed last week to give a $100 credit to each household and a $250 credit to each business affected by Oct. 9 blackouts.

The $65 million cost to the company is lower than the total amount of billing credits that will be doled out because of tax benefits that the company can take.

The company said it doesn't plan to issue rebates for future blackouts.

The company's earnings come days after Newsom met face to face with the utility's chief executive, Bill Johnson, and pressed him to quickly strike a deal with investors. Newsom has said the state won't hesitate to take over the company if it doesn't act soon. Meanwhile, the company warned in its filing Thursday that it may not meet a state-imposed deadline of June 30 to exit from bankruptcy, saying that its reorganization could instead "take a number of years to resolve."

The company's reorganization has drawn some of biggest names on Wall Street, including a group of bondholders led by billionaire Paul Singer's Elliott Management Corp. and Pacific Investment Management Co. The bondholders have aligned themselves with wildfire victims to pitch a restructuring plan that would all but wipe out existing Pacific Gas and Electric shareholders, including Seth Klarman's Baupost Group LLC. U.S. Bankruptcy Judge Dennis Montali has ordered the parties into mediation to speed along a resolution.

The company's stock has plunged 40% since the start of October, when the company lost its exclusive right to pitch a reorganization plan and became the subject of attacks over its blackouts and wildfires.

San Francisco, where the company was founded more than a century ago, began examining options for taking over pieces of the utility after it filed for bankruptcy protection.

Since then, the company's shareholders and creditors have battled for control of the company, putting forth competing plans in bankruptcy court that would maintain the company's long-running setup as a for-profit company.

If the state were to take over Pacific Gas and Electric, it would present both advantages and risks.

The utility would no longer be required to pay out dividends or have at its core the duty to drive profits higher for shareholders. That would free up capital to improve infrastructure.

However, a state takeover could carry with it significant risk.

The toll of increasingly common wildfires are playing out at the publicly traded company right now.

Information for this article was contributed by Mark Chediak, Will Wade and Christopher Martin of Bloomberg News and by Matt Ott of The Associated Press.

Print Headline: Costs of bankruptcy, blazes put at $6.3B for California utility