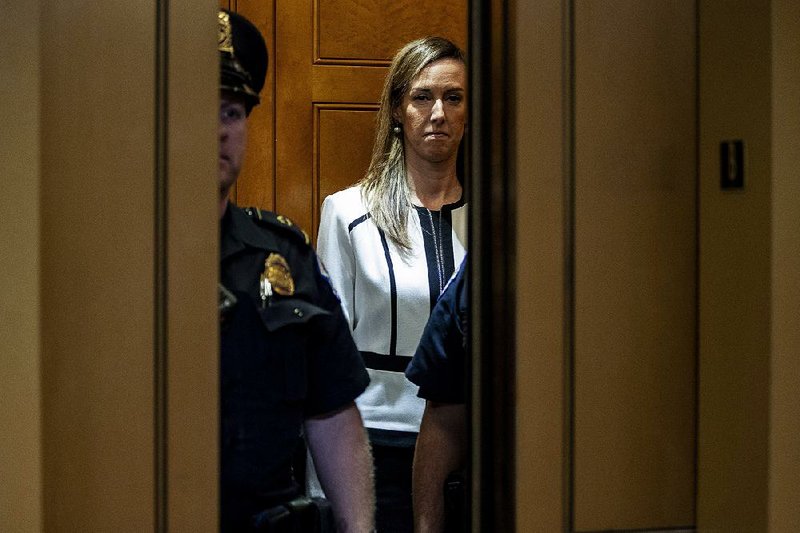 Jennifer Williams, an aide to Vice President Mike Pence, leaves the Capitol on Thursday after being questioned under subpoena for several hours by House impeachment investigators. More photos at arkansasonline.com/118aide/

WASHINGTON -- Former national security adviser John Bolton failed to appear for an interview with impeachment investigators Thursday, making it unlikely that he will provide testimony to the House about President Donald Trump's handling of Ukraine.

Democrats indicated that they have no interest in a drawn-out court fight over Bolton's testimony or that of any others as they move into a more public phase of their impeachment inquiry. They say they will simply use the no-shows as evidence of the president's obstruction of Congress.

An attorney for Bolton, Charles Cooper, said his client had not received a subpoena. Cooper had said Bolton wouldn't appear without one.

An aide to Vice President Mike Pence did appear under subpoena Thursday to speak with impeachment investigators and was deposed for more than four hours.

Jennifer Williams, a career foreign service officer assigned to Pence's office from the State Department, is one of several White House aides who were listening in on a July phone call between Trump and Ukraine President Volodymyr Zelenskiy in which Trump asked Ukraine's new leader to investigate Democrats, according to an administration official who requested anonymity to discuss the conversation.

That call, in which Trump reportedly asked Zelenskiy to investigate political rival Joe Biden and his family, also Ukraine's role in the 2016 U.S. presidential election, is at the center of the Democrats' impeachment investigation.

Officials close to Pence said he wasn't aware of the demands Trump made of Zelenskiy on the call even though Pence likely received a rough transcript of the conversation in his nightly briefing book. As Pence's top adviser on Ukraine matters, Williams would have been responsible for ensuring that Pence knew what happened on the call.

Though Trump has said there was no "quid pro quo," several of the witnesses, including top Ukraine diplomat William Taylor, have testified that it was their understanding that Ukraine would not receive military assistance or an Oval Office visit until it met the president's demands.

Lawmakers leaving the deposition said Williams' testimony lined up with the accounts of others.

"It just never ceases to amaze me how all of these people in every material aspect corroborate one another," said Washington Rep. Denny Heck, a Democratic member of the House Intelligence Panel, as he left the interview.

Republican Rep. Mark Meadows of North Carolina said lawmakers were finding out more details about Pence's September visit to Warsaw, Poland, where he met Zelenskiy. Pence has said he and the Ukrainian president did not discuss Biden during their private meeting, but they had discussed the White House's decision to halt security aid to the nation meant to counter Russian aggression.

Speaking to reporters in New Hampshire, Pence stood by Trump and said if Americans read the administration's memo detailing the call they will find "there was no quid pro quo, the president did nothing wrong." Pence called the impeachment inquiry a "disgrace."

Investigators are wrapping up the private interviews as they prepare to start public hearings next week. House Intelligence Committee Chairman Adam Schiff announced Wednesday that three State Department witnesses will appear in two hearings next Wednesday and Friday: Taylor, career department official George Kent and Marie Yovanovitch, the former U.S. ambassador to Ukraine. Yovanovitch was ousted in May on Trump's orders and Taylor replaced her; both have testified about their concerns with the administration's policy on Ukraine.

Democrats scheduled 13 witnesses to testify privately this week as they have wrapped up the private phase of the inquiry, but so far only Williams and another State Department employee, David Hale, have shown up. Trump has directed his employees not to cooperate with the investigation.

Energy Secretary Rick Perry did not show up for his Wednesday interview, and acting Chief of Staff Mick Mulvaney was not expected to appear for his scheduled deposition today.

Williams is the first person directly connected with Pence to testify in the inquiry.

House investigators Thursday released a transcript of Kent's private testimony, in which he said there were three words Trump wanted to hear from the Ukraine president: Investigations, Biden, Clinton.

"[Trump] wanted nothing less than President Zelenskiy to go to the microphone and say investigations, Biden and Clinton," Kent testified. "Basically there needed to be three words in the message, and that was the shorthand."

Kent told investigators that that was his understanding of what Trump wanted Zelenskiy to say in order to unlock U.S. military aid, as relayed to the official by others, including those in direct contact with the president.

Clinton, he explained, was "shorthand" for the 2016 U.S. presidential campaign, involving Hillary Clinton. It was a reference to Trump's view, pushed by his personal attorney Rudy Giuliani but outside of mainstream U.S. intelligence, that Ukraine played a role interfering in that election.

Kent also raised concerns about Giuliani's "campaign of lies" against Yovanovitch and the Trump administration's firing of the veteran diplomat.

Kent had testified for hours in October about the shifting U.S. policy toward Ukraine as administration officials and Giuliani were taking the lead, acting outside of regular foreign policy channels.

The career official began to understand that unless Ukraine took on the investigations Trump wanted, the administration would hold up nearly $400 million in military aid to the young democracy that relies on U.S. support to counter Russian aggression.

Kent said he memorialized in writing the conversations he was having with other diplomats over his concerns of "an effort to initiate politically motivated prosecutions that were injurious to the rule of law, both in Ukraine and U.S." The memorandum was submitted to the State Department.

He told investigators that he was uncomfortable with what he was hearing about Giuliani pushing the investigations and Trump's special envoy to Ukraine, Kurt Volker, engaging Ukrainian officials on the subject.

"And I told Bill Taylor, that's wrong, and we shouldn't be doing that as a matter of U.S. policy," Kent said.

Trump's ambassador to the European Union, Gordon Sondland, had dubbed himself, Volker and Perry the "three amigos" with a mandate to take the lead on Ukraine policy over the career diplomats, Kent testified.

At one point, Kent said, Volker's assistant, Catherine Croft, asked if anyone had sought investigations from Ukraine. Kent said he hoped the U.S. had not because "that goes against everything that we are trying to promote in post-Soviet states for the last 28 years, which is the promotion of the rule of law."

In one scene, Kent describes mounting unease over Trump's phone call with Zelenskiy.

Within days, he was receiving a readout from Lt. Col. Alexander Vindman, an Army officer assigned to the National Security Council who was among the officials listening to the call. Vindman has become a key witness in the House investigation.

Vindman was "uncomfortable" as he gave Kent the readout and unwilling to talk about much of what was discussed, even over the secure phone line between the National Security Council and State Department.

"It was different than any readout call that I had received," Kent said. "He felt -- I could hear it in his voice and his hesitancy that he felt uncomfortable."

Vindman told him the tone of the Trump-Zelenskiy call was "cooler, reserved" and that Zelenskiy, a former comedian, had tried to turn on the charm.

He said Vindman told him that "the conversation went into the direction of some of the most extreme narratives that have been discussed publicly."

House Republicans must submit a list of proposed witnesses by Saturday morning, Schiff said in a letter Thursday to Rep. Devin Nunes of California, the top Republican on the panel.

"The Committee looks forward to receiving by November 9, within the Resolution's stipulated deadline, the Minority's written request for witnesses, and is prepared to consult on proposed witnesses to evaluate their relevance to the inquiry's scope," Schiff said in the letter.

Some Republicans have floated the idea of requesting that the anonymous whistleblower testify before the committee. Others have proposed that Schiff be required to testify, although the likelihood of that happening appears slim. All witnesses must be approved by Schiff or by a vote of the full committee, on which Democrats hold a majority.

Rep. Eric Swalwell, D-Calif., said Democrats should exercise their right to block Republicans from subpoenaing testimony from the whistleblower, hours after Rep. Jim Jordan, R-Ohio, said his party planned to add that person to its list of impeachment witnesses.

Swalwell declined to share details from Williams' interview but said lawmakers have "not heard a single witness yet" provide testimony that undercut allegations of a quid pro quo involving aid dollars, which he called a "defense dollars for dirt" scheme.

"We have not yet seen an arrow going in any direction other than this was a shakedown led by the president of the United States," he said. 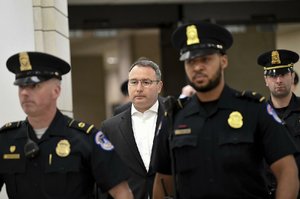