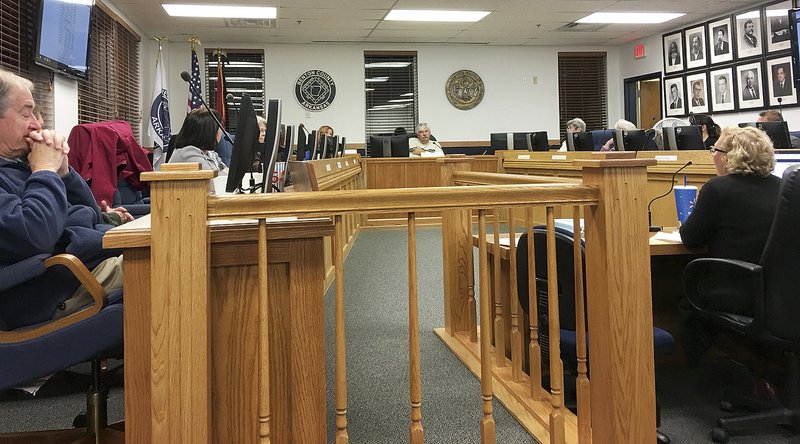 NWA Democrat-Gazette/MIKE JONES Benton County's Budget Committee met Thursday night where final details of the 2020 budget were discussed. The budget shows net revenue of $51.2 million and expenses of about $50.3 million with a surplus of $864,340.

BENTONVILLE -- Justices of the Peace wrapped up work on the 2020 budget Thursday night.

The JPs, meeting as the Budget Committee, worked through some final details mostly related to personnel and capital requests and projects. It was the sixth time the committee met to work on the budget.

Tuesday: Committee of the Whole, 6 p.m.

"It was tough, but it was relatively fluid," Guenther said of the process. "The JPs asked a lot of good questions."

The county has about $13.3 million in unappropriated reserve and $6.4 million in statutory reserve, according to documents.

The budget includes 3% merit raises for employees. The committee agreed on a 5% cap for the raises.

Among the capital projects is $75,000 to upgrade the elevator in the courthouse on Bentonville's square. County Judge Barry Moehring said at a budget meeting Monday the elevator was, "well past its life on some of its components."

Another project would involve replacing the shop and administration building at the Road Department on Southwest 14th Street. The cost would be $150,000.

Bridge work, also part of the capital projects, totals $1.1 million, according to documents.

Capital requests for 2020 -- which includes replacing vehicles at the Sheriff's Office and equipment at the Road Department -- total $4.3 million, but that drops by $880,000 with the sale of old Road Department equipment and grant proceeds.

One $265,000 fire truck was budgeted for the rural departments. A request for a second truck by Gentry Fire Chief Vester Cripps also was approved by the committee, 11-3. Cripps, president of the Benton County Rural Fire Protection Association, spoke to the committee Thursday night about the need for another truck.

The budget also shows $383,524 in payments to 10 organizations, including money for Ozark Regional Transit.

The county will have debt service in 2020 that includes $524,917 for election equipment and $438,831 for a public safety radio system going live next year, according to documents.

"The budget meetings have been well-organized, and needed information has been readily available," Justice of the Peace Susan Anglin said. "Our process has improved greatly in the last three years. At this point, my surprise is the increased revenue that is covering the requests and still having a balance that we can hopefully put aside for our needed future projects of a court facility and jail expansion."

The budget will move on to the Committee of the Whole at 6 p.m. Tuesday.