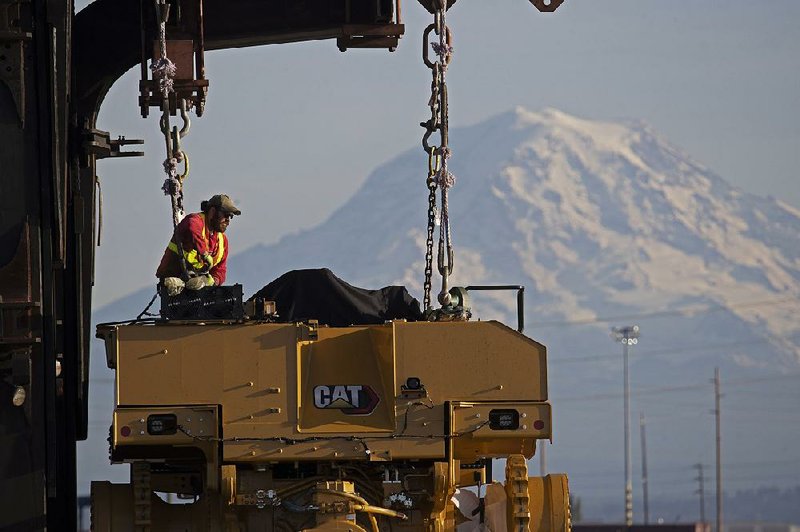 A worker prepares a piece of Caterpillar Inc. construction equipment to be lifted off a trailer Monday at the Port of Tacoma in Tacoma, Wash. Many economists worry that worker productivity will continue to fall.

With economic growth slowing, in part because the stimulus from the federal tax cuts is fading, many economists worry that worker productivity will follow suit. Most economists also believe that President Donald Trump's trade war with China has discouraged businesses from investing more in productivity-enhancing tools such as computers and machinery, offsetting the benefits from the 2017 corporate tax cut.

The Labor Department said Wednesday that productivity, a measure of economic output for each hour worked, fell 0.3% in the third quarter. The drop comes after two quarters of healthy gains.

Still, productivity has increased just 1.4% in the past year, about two-thirds of its long-run average. Weak productivity growth has been a hallmark of the current economic expansion, now in its 11th year. It is a key reason the overall economy has expanded more slowly than in previous expansions.

Greater productivity is an important ingredient in raising living standards. It enables companies to lift worker pay without raising prices on customers.

The decline in productivity resulted from a 2.1% increase in output against a 2.4% rise in hours worked. The Labor Department said self-employed workers "made an unusually large contribution" to the increase in hours worked during the quarter and those particular numbers can be more volatile than for the broader workforce. The number of self-employed Americans had risen from the previous quarter.

That increase "likely depressed productivity more than we were anticipating," said Ryan Sweet, director of real-time economics at Moody's Analytics. "The trend overall for productivity is still mediocre at best and that suggests that the economy's potential growth rate hasn't really changed too much."

Economists noted that the data is volatile on a quarterly basis and said the negative reading is at least partly a blip. Still, it suggests recent increases in productivity may not last.

"With economic momentum poised to cool further in 2020 and the economy no longer fiscally stimulated, we expect productivity gains to continue to fade," Lydia Boussour, senior economist at Oxford Economics, a consulting firm, said.

The Trump administration promoted its 2017 corporate tax cut as a policy that would raise productivity by encouraging businesses to invest in more computers, machinery and other equipment. Productivity did pick up in the first half of this year after growing modestly in 2018, but it now appears to be dropping back to the slow growth that has occurred since the recession ended.

Many economists blame the trade war with China for discouraging businesses from spending more on goods that would make workers more productive. The tariffs imposed by both countries have raised business's costs and caused many executives to postpone plans to expand and invest.

"The trade policy situation has derailed [investment] to some degree," said Stephen Stanley, chief economist at Amherst Pierpont Securities. "Firms seem to have stepped back."

Still, Stanley said it is too early to determine whether the administration's tax cuts have boosted investment.

Economists point to many different reasons for the current sluggish level of productivity growth. Some argue that new technologies, such as smartphones and mobile software, simply aren't that economically useful. Others say that innovations like search engines, which are free to users, aren't properly captured in government data.

The government's report also shows that the low unemployment rate is driving up labor costs by forcing companies to pay more, a trend that could eventually raise inflation. For now, economists say that many corporations are absorbing the higher costs by reducing their profit margins, rather than passing the costs on to customers.

Labor costs rose at an annual rate of 3.6% in the third quarter, and are up 3.1% in the past year. That annual gain is the largest in more than five years. That higher pay could provide key support to consumer spending in the coming months.

The decline in productivity reflects slower economic growth combined with steady hiring. The economy grew just 1.9% in the third quarter, down from 2% in the second quarter and a 3.1% pace in the first three months of the year.

Information for this article was contributed by Christopher Rugaber of The Associated Press and by Reade Pickert of Bloomberg News.