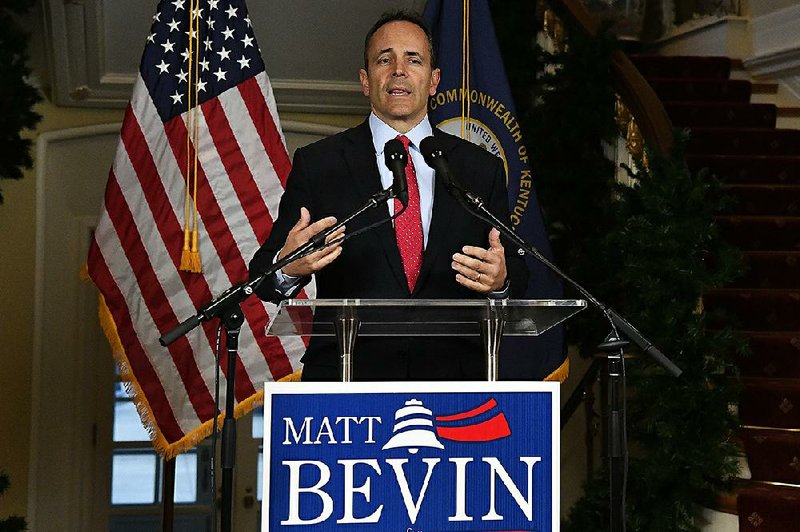 Kentucky Gov. Matt Bevin said Wednesday during a news conference in Frankfort that he asked for a recanvass of his state’s election results to ensure the integrity in the election process. More photos are available at arkansasonline.com/117governor/

"You're going out to replace a radical, liberal Democrat as your governor," Trump said. "John Bel Edwards has not done the job."

Trump delivered a wide-ranging speech that veered from endorsing Rispone to decrying the House impeachment inquiry.

While Trump praised Rispone, he also railed against the Democrats vying for the party's nomination to take on Trump in 2020.

[Video not showing up above? Click here to watch » https://www.youtube.com/watch?v=WhrYdJkNbZg]

"Make no mistake, if the Democrats get back, in you will have a depression the likes of which you've never seen before," Trump said, adding that Democrats had "betrayed" the people of Louisiana on immigration policy.

Rispone is looking to unseat Edwards in a Nov. 16 runoff because neither won a majority last month in the state's nonpartisan primary.

On Wednesday night, Trump's campaign announced that he would return to the state for another rally on Nov. 14, two days before the election.

Democrats flipped control of the Senate and House, gaining outright control of state government in a state that is often a battleground for the White House.

Democratic pickups in Virginia occurred in Washington, D.C., and Richmond suburbs that already had trended in the party's direction in recent years.

Meanwhile, Republican Gov. Matt Bevin asked Wednesday for a recanvass of Kentucky's Tuesday election results that showed him more than 5,000 votes behind Democrat Andy Beshear, who discounted the challenge and began preparing to take office. Trump had endorsed Bevin and held a rally for him Monday night.

Beshear, the state's attorney general, said he's confident in the election outcome, saying any review would show he won the hard-fought campaign.

"Whatever process that the governor chooses to go down, it's not going to change this overall number of votes," Beshear said at a news conference. "We are going to take the steps to move forward to make sure that we are ready ... on the day that we're inaugurated."

With 100% of precincts reporting, Beshear led by a little over 5,000 votes out of more than 1.4 million counted, or a margin of less than 0.4 percentage point.

Beshear gained considerable ground on Bevin in Kentucky's suburban Cincinnati, Ohio, counties that had helped propel the Republican to office four years ago.

Bevin's campaign manager Davis Paine said Kentuckians deserve a "fair and honest election," adding that "we are exercising the right to ensure that every lawful vote was counted."

Kentucky's secretary of state, Alison Lundergan Grimes, scheduled the recanvass for Nov. 14. A recanvass is a check of the vote count to ensure the results were added correctly.

Beshear's campaign responded with a statement repeating that he hopes Bevin honors the election results. The campaign noted that a recanvass has never led to a reversal of an election result in Kentucky.

Reeves, the current lieutenant governor, sought to capitalize on those GOP leanings after Hood, the attorney general, acknowledged that he voted for Hillary Clinton over Trump in 2016.

Information for this article was contributed by Bill Barrow, Bruce Schreiner, Aamer Madhani and Melinda Deslatte of The Associated Press; and by Jordan Fabian, Mario Parker and Erik Wasson of Bloomberg News.