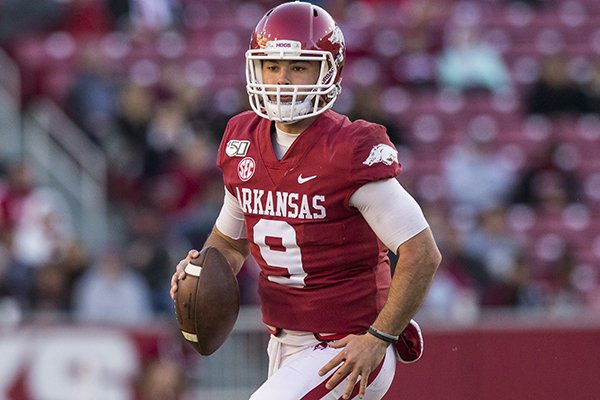 Arkansas quarterback John Stephen Jones looks to pass during a game against Mississippi State on Saturday, Nov. 2, 2019, in Fayetteville. - Photo by Ben Goff

FAYETTEVILLE -- The search for consistent quarterback play enters its 10th week for the University of Arkansas this Saturday.

Coach Chad Morris has tabbed redshirt freshman John Stephen Jones as his starting quarterback for Saturday's 11 a.m. game against Western Kentucky in the on-campus finale for the Razorbacks (2-7), who will try to stop a six-game skid.

QB or not QB

The Razorbacks have struggled to find success out of the quarterback spot much of the season. Here are number of possessions and drives statistics for quarterbacks Ben Hicks, Nick Starkel, John Stephen Jones and KJ Jefferson. Kneel downs or end-of-half series are not counted against the percentage of drives that ended in scores.

Jones, a 5-11 redshirt freshman, and 6-3 true freshman KJ Jefferson are targeted to get the bulk, if not all, of the playing time at quarterback after senior Ben Hicks and junior Nick Starkel combined to start the first nine games.

Arkansas offensive coordinator Joe Craddock gave an indication of how the series at quarterback might play out without giving away a plan, but added "we're definitely going to see" Jefferson earlier in the game.

"We haven't set anything yet," Craddock said Monday. "We're still working on the game plan. We'd like to get him in there a lot earlier, obviously, than last week and kind of see who's moving the ball the best and who gives us the best chance to win."

Arkansas freshman wideout Treylon Burks was glad to see his roommate Jefferson make a splash in his debut with a four-play touchdown drive against Mississippi State.

"It's always fun to see somebody new come in playing, and especially another freshman," Burks said. "And he's my roommate, so I was pretty pumped up about that, too."

Jones will make the sixth different starting quarterback for Arkansas in the 22nd game under Morris. Cole Kelley, Ty Storey -- who will start for Western Kentucky on Saturday -- and Connor Noland made starts in 2018; Hicks (four starts) and Starkel (five) have split the starts this year.

With the exception of Starkel's performance in a 55-34 victory over Colorado State in Week 3, the Razorbacks have lacked consistent productivity from the quarterback spot, which has turned into one of the defining issues in Year 2 under Morris.

Morris said a lot of factors have come into play that have kept quarterback productivity from being what it could have been under Hicks and Starkel.

"It wasn't solely just those two guys or just one guy," Morris said. "I mean, it just didn't work out. We couldn't get the consistency that we needed."

Morris didn't spell out the factors he referenced, but they are many. Injuries on the offensive line and up-and-down play on the front contributed. Youth at the wide receiver spots has helped nullify a handful of big plays. Decision-making at quarterback also qualifies.

Arkansas quarterbacks have a combined passing efficiency rating of 106.84, which ranks 120th out of 130 FBS teams and 12th in the 14-team SEC.

The Razorbacks have thrown 13 interceptions -- 10 by Starkel, 2 by Hicks and 1 by punter Sam Loy -- tied for the third-highest number in the country behind the 14 of Alabama-Birmingham and New Mexico State.

Jones and Jefferson have guided three touchdown drives out of eight legitimate series in the past two losses to Alabama and Mississippi State. Hicks and Starkel combined for one touchdown drive -- a two-play, 61-yard sequence capped by Rakeem Boyd's 52-yard touchdown run -- in 15 series the past two games.

The Hicks and Starkel possessions in those games yielded eight punts and five turnovers, while the Jones-Jefferson series led to two punts and one turnover.

Jones and Starkel split a series at Alabama that reached the Tide's 24 before Trevon Diggs intercepted a Starkel pass and returned it 84 yards for a touchdown just before the half.

Jones ability to keep the Arkansas offense on the field could have ramifications against Western Kentucky, which ranks 23rd in time of possession (32:16 per game). 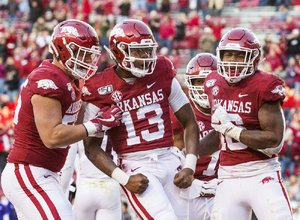 Photo by Ben Goff
True freshman KJ Jefferson (center, shown) and redshirt freshman John Stephen Jones are expected to get the majority, if not all, of the playing time at quarterback for Arkansas on Saturday against Western Kentucky. 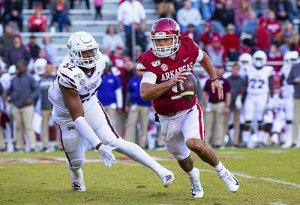 Photo by Special to NWA Democrat-Gazette/DAVID BEACH
Redshirt freshman John Stephen Jones (shown with ball) has been named the starter, his first as a Razorback.

"His decision making is really good," Morris said of Jones. "Coming out of the Alabama game and all the read game we asked him to do, he did not miss a read, which was a credit to those long drives that we've had. Just his decision making and his ability to move the chains with his feet."

Jefferson's debut produced a four-play, 75-yard touchdown drive last week that clearly energized the fans at Reynolds Razorback Stadium and his teammates. Jones had two runs for 26 yards, including a 5-yard touchdown, and hit Treylon Burks with a 32-yard pass on the series.

"We're happy for them," Burks said of Jones and Jefferson. "We go out there just like if it were Ben or Nick and play our butts off for them. We practice with John Stephen and KJ every day even though they didn't start back then, so it's nothing new to us."