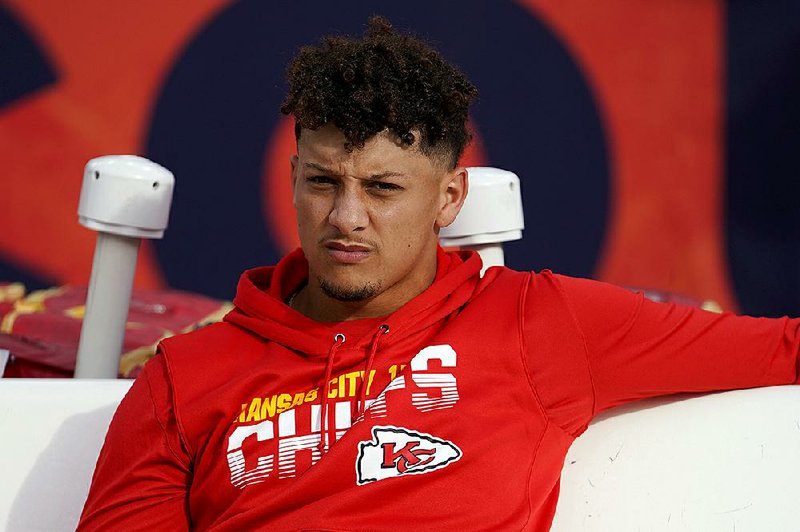 Kansas City quarterback Patrick Mahomes’ status for Sunday’s game against Tennessee is unknown. If Mahomes can’t play, the Chiefs will go again with Matt Moore as the starter.

KANSAS CITY, Mo. -- The Kansas City Chiefs will continue to split first-team reps in practice between Patrick Mahomes and backup Matt Moore this week, leaving open the possibility the league's MVP could be back for Sunday's game at Tennessee.

Mahomes has been out since dislocating his kneecap in a game against Denver on Oct. 17. He has yet to miss a practice but was ruled out for the Chiefs' game against Green Bay, then was questionable last week against Minnesota before he was declared inactive on game day.

"It's going to be day to day," Chiefs Coach Andy Reid said. "He didn't take a ton of reps last week. We'll try to increase him a little bit and see how it works out. And we'll keep you abreast as it goes, but right now that's where we're at."

The Chiefs (6-3) have gone 2-1 with Moore at the helm, including the game he finished in Denver, which has allowed them to maintain their lead in the AFC West and keep pace in the race for a first-round bye and homefield advantage in the playoffs. That stretch also has taken some of the pressure off the Chiefs to rush Mahomes back to the field before he's ready.

After the trip to Tennessee, the Chiefs head to Mexico City to face the Los Angeles Chargers before getting a long-awaited bye. The field conditions were so disastrous at Azteca Stadium last year that the Chiefs' scheduled game there was relocated at the last minute, and despite a new surface and NFL assurances, the Chiefs may not want to press their luck with Mahomes there.

In other words, Mahomes could return this week. Or next week. Or not until the Chiefs return from their bye for their next home game against the Raiders on Dec. 1.

"The doctors, they're involved. We have experts looking at it. I'm not the expert, that's for sure," Reid said. "Now it's a matter of just going through and doing it. Increase his work level and see how he handles it and that's where we're at. We'll monitor it."

Reid did acknowledge that Moore would start if Mahomes is unable to go.

The longtime Panthers and Dolphins quarterback was out of football entirely last season, but he was signed prior to the Chiefs' preseason finale when backup Chad Henne broke his ankle.

Henne was activated from injured reserve last week and was Moore's backup against the Vikings.

"We're kind of in the same pattern we've been in the past couple of weeks," Moore said. "We're day-to-day and moving forward, similar to last week."

Part of the reason Moore would be the guy: He's earned it, exceeding even the most optimistic of expectations that the Chiefs could have placed on a QB who was coaching prep football three months ago.

Moore threw for 117 yards and a score in wrapping up the 30-6 rout of Denver, and he threw for 267 yards and 2 touchdowns while going toe-to-toe with Aaron Rodgers in a nip-and-tuck 31-24 loss to Green Bay. He threw for 275 yards and a score against Minnesota, and made several stoic throws late in the game that helped the Chiefs tie the game and then set up Harrison Butker for the winning field goal.

Add it up and Moore has completed 65% of his passes for 659 yards with 4 TDs and no interceptions -- not Mahomes-like numbers, but good enough for the Chiefs to keep winning.

"We've been comfortable with Matt. It doesn't matter who goes out there at quarterback. Sammy can go out there," Chiefs wide receiver Tyreek Hill said of his running mate, Sammy Watkins.