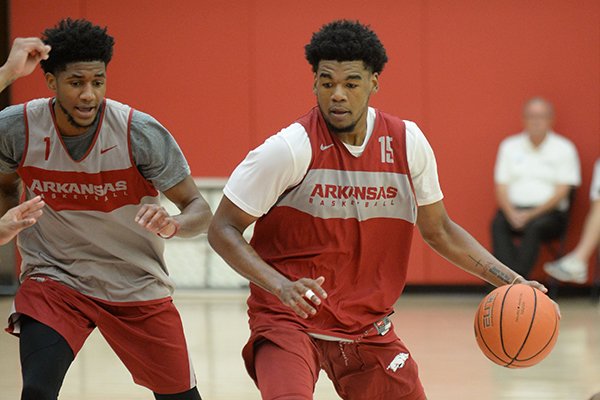 Arkansas guard Mason Jones (15) drives to the lane Thursday, Sept. 26, 2019, as guard Isaiah Joe defends during practice in the Eddie Sutton Gymnasium inside the Basketball Performance Center in Fayetteville. - Photo by Andy Shupe

Joe hit an Arkansas record 113 three-pointers, while Jones hit 76 of the Razorbacks' total of 259.

When it came to dunks, though, Joe and Jones weren't going to win any contests.

But in Eric Musselman's debut as the University of Arkansas men's basketball coach Tuesday night, Joe and Jones showed in a 91-43 victory over Rice that they can get the Walton Arena crowd going with dunks as well as three-pointers.

Joe brought the fans to their feet when he slashed to the basket and finished with a dunk to put the Razorbacks ahead 27-16 with 5:15 left in the first half.

Two possessions and 59 seconds later, Jones -- who transferred to Arkansas from Connors (Okla.) State Community College last year -- finally got his first dunk as a Razorback to make it 31-16 on a fast break that again ignited the announced crowd of 17,274.

"I was kind of surprised I dunked it, to be honest," Jones said. "We've been working on it.

"That's one of my main things this year, just to be able to finish above the rim -- and right there I wanted to show I've been working on it. You can expect to see more of that from me and Isaiah."

Joe credited strength and conditioning coach Dave Richardson with helping the duo become confident enough physically to make dunks a part of the their games.

"Coach Rich has worked on our bodies tremendously, and I feel like it's helping us for the better," Joe said. "You're seeing it on the court with both of us getting dunks.

"It's nothing you saw last year, but it's definitely something to get used to."

Jones and Joe, who combined for 56 points against Rice, still showed plenty of range by hitting shots behind the new, deeper three-point line that's at 22 feet, 13/4 inches after being at 20-9 since the 2008-09 season. Jones hit 4 of 8 three-pointers and scored a career-high 32 points, and Joe hit 4 of 11 and scored 24 points.

Both also displayed other parts of their game.

Jones had a career-high five steals and seven rebounds. His high for steals last season was three against Texas State and Vanderbilt.

"This summer, to be honest, was up and down for me because I was still trying to get used to the system," Jones said. "One thing Coach Musselman always did -- and I will always appreciate him -- is [stress] defense.

"He told me that last year I really didn't play defense like that. I wanted to come out and prove I can rebound, that I can play defense, that I can get steals, and I can do other things than offense."

Joe had a career-high seven assists along with five rebounds. His previous high for assists was five against Montana State and Vanderbilt.

"I've been working on other aspects of my game, and play-making has been one of them," Joe said. "Being able to facilitate and create for my teammates, because we have a lot of firepower.

"You just have to figure out how to utilize it, get people open. The system that we run that Coach Musselman has created for us is great."

Musselman said just a couple of weeks last spring after he was hired from Nevada to replace Mike Anderson, he knew Joe could play point guard -- which he did at times against Rice.

"He can run pick-and-roll and see over defenders because of his length and size," Musselman said. "He's a really smart player.

"With the makeup of our team, I don't know how much he'll play that point, but I certainly want the ball in his hands and for him to be a little bit more of a playmaker instead of just a spot-up shooter. I think he's earned that right, for sure."

"You really have to give Mason a lot of credit," Musselman said. "For his whole career, he's been a small forward and off-guard. We're asking him to play power forward. It's no secret, that's what he played the whole game [against Rice], and he accepted that."

Jones said the Razorbacks were glad to win their opener by 48 points, but they know it's just the start of the season.