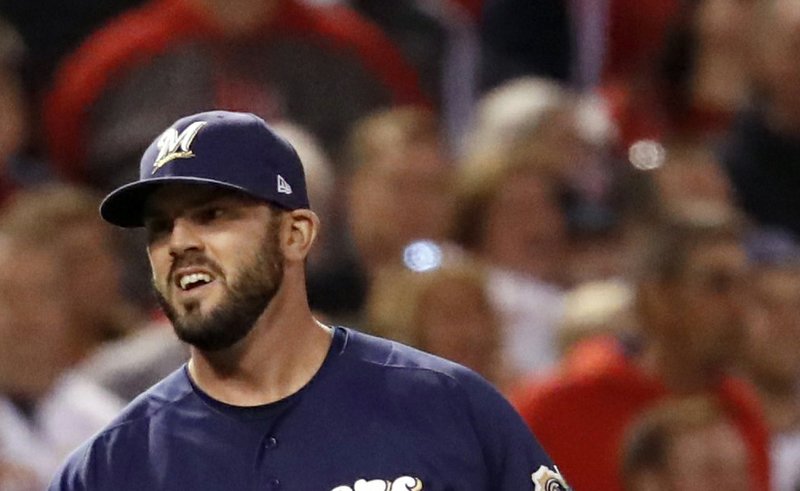 Mike Moustakas is shown in this file photo.

ST. LOUIS -- Quick, pick the easiest position for the Cardinals to upgrade this offseason.

That sentence appeared in the St. Louis Post-Dispatch in October 2018.

Depending on what the Cardinals shared publicly in their end-of-season news conference Tuesday, we should get some sense of how the front office planned to work through a complicated challenge facing the construction of the 2020 team.

A third-base approach that proved sustainable through the previous three seasons betrayed the Cardinals in 2019. Since 2016, the team had not fielded one third baseman who logged more than 1,000 innings at the position. On top of that, the top-two players who combined to split the reps there changed every year.

Still, the Cardinals managed a respectable .793 OPS at third between 2016-18, a mark that trailed only four National League competitors. But when the Cardinals turned back to Matt Carpenter, who interestingly had been the last Cardinal to surpass that 1,000-inning mark at third in 2015, the bottom dropped out.

Carpenter's team-high 8801/3 innings at third were paired with the worst offensive season of his career. He ended the season with an adjusted on-base plus slugging percentage of 91, which is nine points below the league average hitter. The emergence of rookie Tommy Edman helped soften the blow. He logged the second-most innings at third (3821/3) and slashed an impressive .304/.350/.500. Still, the Cardinals' overall third-base OPS of .749 ranked 20th in the majors and 11th in the 15-team NL.

The Cardinals, especially when it comes to veteran home-grown players, prefer more chances over paying a struggling player to depart. Carpenter's no-trade is a factor. On the opposite end of that scale is some alarming evidence. Of the 142 MLB hitters who have totaled more than 500 at-bats since September of 2018, Carpenter's .216 average ranks 141st.

The most expensive and most unlikely answer would be winning the free-agent battle for Anthony Rendon. It's best to take a believe-it-when-you-see-it stance when it comes to the notion of the Cardinals winning a wide-open race for a premier free agent. Four of the Cardinals' top-16 prospects can play third base. Any long-term and expensive addition of an outside third baseman seems unlikely, and that includes the notion of trading for Rockies star Nolan Arenado. He signed an eight-year extension worth $260 million in February.

The progression of third-base prospects offers promise for the position in the not-so-distant future. Options for a reliable bridge exist.

The easiest and cheapest fix for the Cardinals would be to plant Edman at third base and let Carpenter attempt to work his way off the bench. That banks on Edman avoiding a sophomore slump and nixes the notion of infielder/outfielder Edman becoming the team's Swiss Army Knife, a desirable option considering the need to ease the workload of shortstop Paul DeJong.

Why not find something in between?

If the big-spending Dodgers covet Rendon, then Justin Turner could be on the move. If Josh Donaldson does not agree to an extension with Atlanta, the Cardinals could resume interest in a player who has always demanded their attention. And then there is Mike Moustakas, who once again is a free agent after declining a mutual option with the Brewers that would have paid him $11 million in 2020.

There was a time when the notion of the Cardinals adding Moustakas seemed like an incremental upgrade. Not anymore.

Moustakas, 31, has posted five consecutive season of above-average offense. He hit more home runs (35) than any player on a Cardinals team that could lose cleanup hitter Marcell Ozuna.

Moustakas hits left-handed, something the Cardinals' lineup needs. He also hits breaking pitches well, something the Cardinals' lineup desperately needs. His defense won't win Gold Gloves, but the Cardinals are not getting Gold Glove defense at third base now. The free-agent tracker at FanGraphs estimates Moustakas could receive a three-year deal worth $36 million. Would he accept a two-year deal for more than $12 million per season? It would be twice as long as his last two contracts. Context matters.

It's what makes Moustakas look so appealing now.