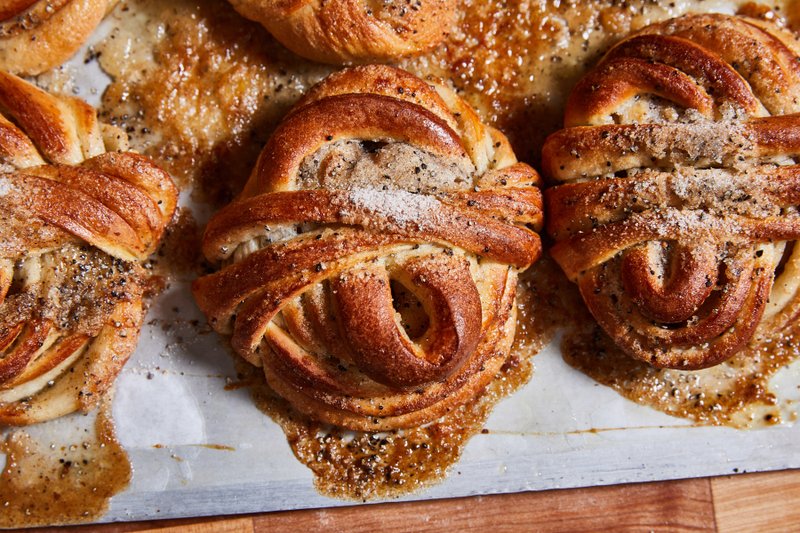 Kardemummabulle, or cardamom buns, fresh from the oven at Fabrique in New York. Fabrique procures its cardamom pods from Guatemala through a Swedish purveyor that removes and coarsely grinds the pebble-hard seeds, giving the bakery's bun its intense flavor and speckled appearance. Photo by Colin Clark (The New York Times)

The scent of green cardamom will linger on your clothes for a couple of hours after a visit to Fabrique, the Swedish bakery that opened its first U.S. outpost nearly five months ago in the meatpacking district of Manhattan. You'll wish it would never leave. The warming, resinous fragrance of the spice, combined with the buttery, yeasty fumes of the bakery, work like an enchantment.

The source is Fabrique's kardemummabulle, or — a little less fun to say in English — cardamom bun. Suddenly this summer, New Yorkers fell under its spell.

For some Americans, the buns might be their first unadulterated taste of cardamom, while those familiar with the global cuisines in which the spice is a common ingredient (Indian, Turkish and Iraqi, to name a few) may find this Nordic application a novelty.

"I think it's quite unique to use cardamom in that way, actually, in a sweet thing like this," said David Zetterstrom, who owns and operates Fabrique with his wife, Charlotta Zetterstrom. "But it works really well."

It works so well that the bun is ubiquitous in Sweden (along with its counterpart, the cinnamon-forward kanelbulle, which is typically also made with cardamom). When he was devising the formula for Fabrique's cardamom bun back in 2008, Zetterstrom understood that anything basic wasn't going to cut it: "You have to find your own way to do them," he said. "You have to have some sort of edge to them, you know?"

The "edge" he found is a buttery one; the dough itself doesn't contain much fat, but he amps it up in the filling. Looking at the finished product, you might worry it could be bland or dry. Although the bun is golden, it's not crowned with the kind of glistening, gooey caramelization we're accustomed to seeing on American buns.

But there are intimations of what lies within. As that filling melts into the dough during baking, some of it seeps out, pooling around the bun in a molten mix of butter, sugar and cardamom. As the liquid cools, it hardens into a thin, crisp brittle, giving the bun feathery, candylike edges. The result is a tender, unequivocally moist pastry that would make the poor Pillsbury Doughboy weep in shame.

Zetterstrom whets that edge with extra spice. "Every bakery has their own recipe," he said. "Ours contains more cardamom."

Fabrique, which now has 19 locations in Stockholm and five in London, procures its khaki-colored cardamom pods from Guatemala through a Swedish purveyor that then removes the brown, pebble-hard seeds and coarsely grinds them. This is where the spice's flavor is concentrated, and where the bakery's bun gets its signature intensity and speckled appearance.

Johanna Svensson, who worked at one of the Fabrique bakeries in Stockholm before moving to New York to be the head baker at the new store, has yet to get sick of them. "I try not to eat them every day," she said, before admitting she usually does anyway. 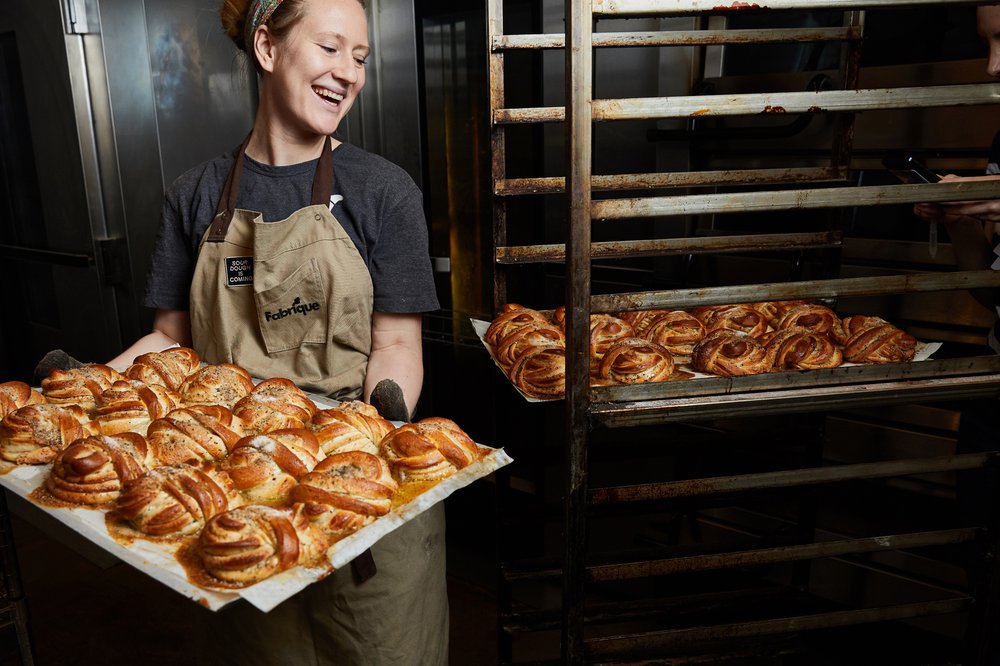 She hasn't wearied of making them, either, of watching the dough get kneaded, teasingly tossed by the two robotic claws of an industrial mixer that reminds her of a spaceship; of rolling out the dough, then straightening it to remove wrinkles; of winding the dough strips layered with filling around her index and middle fingers as you would wrap a bandage; or of sprinkling a cone of cardamom sugar over the top of each flattened knot before putting it in the oven.

Replicating these buns at home poses a few challenges, none of which can't be overcome. Home kitchens aren't equipped with machines that have automaton-like limbs to bring together a dough. But a stand mixer will do, as will a pair of (human) hands. At the bakery, fresh yeast is the leavening agent; home cooks can use active dry yeast instead.

As for the prominent spice, it would take a lot of pods to get the amount of seeds necessary for a proper Fabrique batch. Not only is that an expensive prospect, but it's a time-consuming one, and it's hard on the kinds of grinders used in residential kitchens. (Svensson said the company that handles the task for the bakeries in Sweden changes its grinder blades once a week.)

For home bakers, the answer is store-bought finely ground cardamom. It's not as pungent because it's not freshly pulverized, and because the outer shells are duller in flavor. So you use a whole lot of it; buy the best quality you can find. Freshly grinding a few pods for the sprinkling sugar on top of the bun gives you a burst of that woodsy heat, and its aroma hits you as you bite in.

It's important to manage expectations here. The cardamom buns you make at home aren't perfect facsimiles of the Fabrique original. That's impossible, and the reason we have bakeries. But they're very, very good — so good you could eat them every day.

In a small saucepan set over medium-low heat, bring the milk to 105 to 110 degrees. Remove from the heat and pour it into a small bowl. Sprinkle the yeast on top, give it a quick whisk and let it rest a few minutes to dissolve and activate. If the yeast looks like it's clumping, whisk it gently.

In the bowl of a stand mixer fitted with a dough hook, combine the flour, sugar, butter, cardamom, salt and the yeasted milk. Mix on the lowest setting until just combined and beginning to form a dough, 1 to 2 minutes. Continue on low to knead dough, about 2 minutes. It should go from shaggy and coarse to smooth and shiny. Working inside the bowl, give the dough a couple more kneads by hand to bring it together. You can also knead the dough entirely by hand on a work surface. (It'll take 8 minutes or so.)

Line a 9-by-13-inch sheet pan with parchment paper and dump the kneaded dough out onto it. Using your hands, pat and shape the dough into a large rectangular block. Make 4 or 5 shallow, ¼-inch-deep slashes in the dough with a knife. Cover the baking sheet with a damp kitchen towel or plastic wrap, and transfer the dough to the refrigerator to chill for 2 hours.

In the bowl of a stand mixer fitted with the paddle attachment, beat the butter, sugar, cardamom and salt on low speed just to form a granular paste. (It should resemble marzipan.) Don't overbeat it: You don't want it to be too soft or get fluffy. You can also do this by hand in a bowl, combining the ingredients with a spatula or bench scraper.

Remove the dough from the refrigerator and let sit at room temperature for a few minutes so it's not so stiff that you can't roll it out. Place the dough on a thick silicone mat or a very lightly floured work surface and use a rolling pin to roll it out to a roughly 15-by-18-inch rectangle a little more than ⅛-inch thick, with the shorter side facing you. As you roll it in both directions, pause occasionally between rolls to relax the dough by patting it, lifting it and pulling it to straighten out any ripples.

Go over the dough with the rolling pin a couple of times, vertically, to flatten the edges, and stretch it a few more inches before cutting and shaping. You want a 12-by-16-inch rectangle (the longer side will be facing you). If any filling oozes out, use your offset spatula to remove it so your workstation doesn't get sticky.

Using the straight edge of a ruler and a pastry cutter (or very gently using a small, sharp knife), trim any uneven edges. Cut the dough vertically into 16 (1-by-12-inch long strips. Starting from the end, gently wrap one strip around the tips of your index, middle and fourth finger (or just the index and middle if you've got strong hands), like a bandage, two or three times, letting the dough overlap and working cautiously so it doesn't tear. Place your thumb on top of the wrapped dough, on the side closer to your wrist, to secure the shape, then loop the remaining end of the strand over and through the center of the bun, tucking it under at the base of the bun. You should have a rounded bun made out of bandage-like strips. The knotted part will be unexposed, hidden at the bottom.

Place each bun on the prepared baking sheets as you go, patting it down for a flatter shape. Space the buns evenly (you can eyeball it). Leave them to proof at room temperature, uncovered, for about 1 hour. They should expand and soften.

In a small bowl, using a fork or whisk, beat the egg together with 1 tablespoon water until well combined and frothy.

Grind the cardamom pods in a spice grinder, making sure you break down the tough outer husks. Transfer the ground spice to a small bowl and whisk it together with the sugar.

Lightly brush each bun with the egg wash, and generously sprinkle the tops of the buns with the cardamom sugar, using about ½ teaspoon per bun.

Bake for 8 minutes, then lower temperature to 375 degrees, rotate trays completely (180 degrees and top to bottom, bottom to top) and continue baking for an additional 12 minutes. The surface of the buns should be golden brown.

Let the buns cool for 10 minutes before eating, so the spiced, sweet buttery goo that pools around their edges can harden into crispy candylike edges, or let them cool entirely.

Note: If you wish to use cardamom pods and grind them yourself for a more intense flavor, use 20 to 30 whole pods per finely ground tablespoon. You can also use decorticated cardamom seeds (those extracted from the husks). They're available at specialty stores and online (or you can remove the seeds from fresh cardamom pods yourself). Coarsely grind the seeds with a mortar and pestle or an electric spice grinder: You'll want to use 1 tablespoon whole seeds each for the dough and the filling, but if you're at all cardamom-shy, start with 2 teaspoons whole seeds each.

Print Headline: Cardamom, I love you