Bolstered by robust income and sales tax collections, state general revenue set a monthly record for October, thanks to a $44.4 million increase over what was taken in the same month a year ago.

Last month's collection of $554.4 million beat the state's forecast by $36.8 million, or 7.1%, state Department of Finance and Administration officials said Monday in their monthly revenue report.

"We'll just have to see if it continues at this rate," he said. October's general-revenue collections increased by 8.7% over the same month a year ago.

Tax refunds and special government expenditures come off the top of total general revenue, leaving an amount that state agencies are allowed to spend. The net in October increased by $35.5 million, or 8.1%, over the same month a year ago, to $470.9 million. The net outdistanced the forecast by $33.3 million, or 7.6%.

Gov. Asa Hutchinson said October's revenue report "continues to be good news for our state and reflective of a vibrant economy.

"After four months into the fiscal year, we are above forecast in individual income and sales tax collections," the Republican governor said in a written statement. 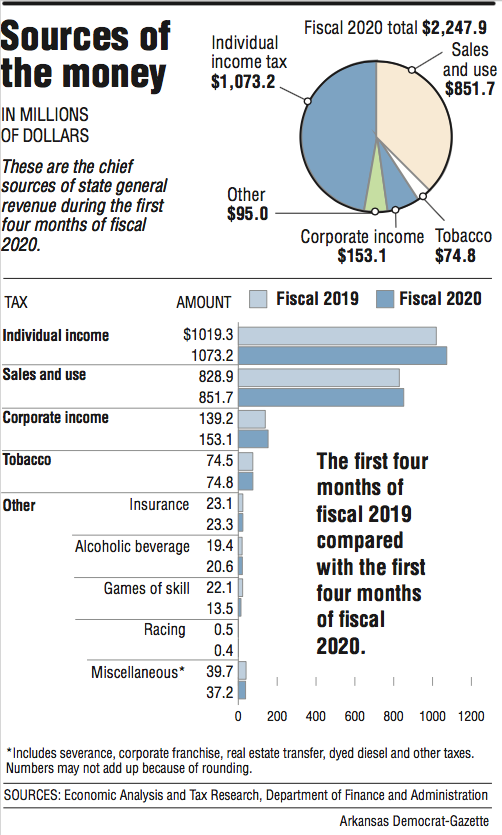 "This represents both high employment and consumer confidence. I am very pleased with the current surplus, and a cushion is good to have as there remains economic uncertainty at the national level," said Hutchinson, who is on an economic development trip to Japan and China.

Arkansas' unemployment rate ticked up in September to 3.5% from the previous month, according to U.S. Department of Labor information released last month.

October is the fourth month in fiscal 2020, which started July 1.

Asked whether the $72.2 million surplus will be sustained throughout fiscal 2020, Finance and Administration Secretary Larry Walther said, "Starting next year we have another tax reduction that is in there.

"We hope and we pray that that will be the case, but time will tell over the next six months," he said as to whether the surplus remains.

In fiscal 2020, the state's general-revenue budget totals $5.75 billion -- an increase of $124.1 million from fiscal 2019's budget -- with most of the increase targeted for human services and education programs. The Republican-controlled Legislature and the governor enacted the budget earlier this year during the regular session.

They also approved a measure to reduce corporate income tax rates over the new few years. Another law requires out-of-state internet retailers without a physical presence in the state to start paying sales tax on their in-state sales. These changes ultimately will affect the general-revenue tax collections in different ways.

Withholdings -- the largest category of individual income tax collections -- increased by $13.3 million, or 6.4%, over the same month a year ago to $219.4 million and exceeded the forecast by $4.2 million. That reflects more people are working and more are working longer hours, said Shelnutt.

Both consumer- and business-related sales tax categories "showed fairly good growth across the board" last month, and there also was a $3.4 million, or nearly 13%, increase on sales tax collections on motor vehicles from a year ago to $29.5 million, Shelnutt said.

Out-of-state internet retailers are "probably a contributor" to the increase in total sales and use tax collections, he said.

"But it is fairly unusual to see almost every sector up in sales tax at the same time, business and consumer," Shelnutt said.

However, he said he doesn't have estimates on how much revenue is coming from out-of-state internet retailers.

"They are complicated because of the registrations of those companies and their change in status as to whether they have put in a warehouse or not in state," Shelnutt said.

October is the third month in which Oaklawn Racing Casino Resort in Hot Springs and Southland Casino Racing in West Memphis are paying a lower tax rate on casino revenue under Amendment 100 to the Arkansas Constitution, approved by voters a year ago.

The October report showed $2.5 million in gambling revenue, a drop of $2.9 million from a year ago. The revenue exceeded the forecast by $300,000.

Amendment 100 allows Oaklawn and Southland to operate as full-fledged casinos. The amendment also authorizes new casinos in Jefferson and Pope counties with the approval of local officials.

Under Act 416 of 2019, casino-related revenue above $31.2 million will be diverted to the state Department of Transportation, which will be guaranteed a minimum total of $35 million a year from casino revenue, a restricted reserve fund and other sources. Act 416 also instituted a new wholesale sales tax on fuel and raised registration fees for hybrid and electric vehicles.

Altogether, these taxes and fees will annually raise about $95 million more for state roads and about $13 million apiece for cities and counties.

"Regarding revenue generated via the fuel tax that was implemented October 1, companies have until November 25 to file reports for October with us," said Scott Hardin, a spokesman for the finance department. "By the end of November, we will know how much the tax generated in special revenues."