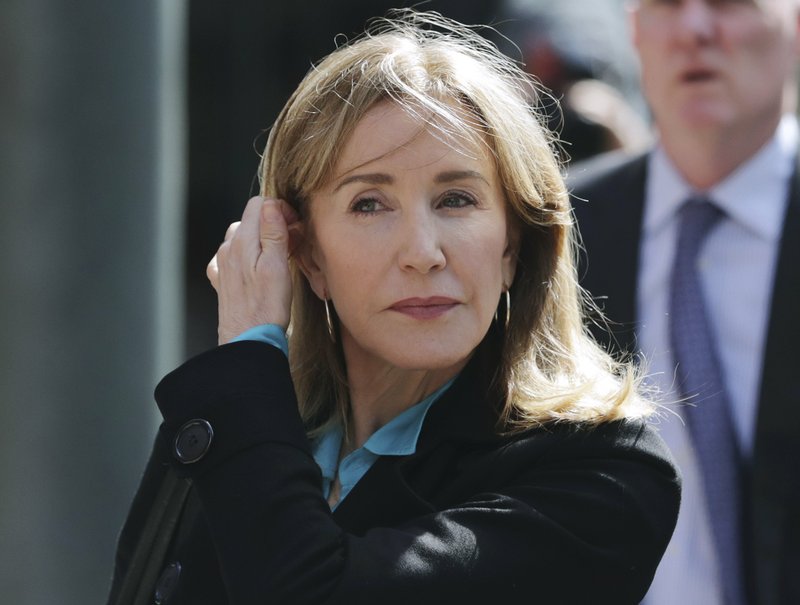 Desperate Housewives star Felicity Huffman arrives at federal court in Boston in April to face charges in the college admissions scandal. She went on to serve 11 days of a 14-day sentence, and now is the subject of a satirical podcast about her time behind bars. (Photo by Charles Krupa via AP)

Actress Felicity Huffman was released from prison after serving 11 days of a 14-day federal prison sentence for her role in the high-dollar college admissions scandal. She was fined $30,000, has to be supervised by authorities for a year and also complete 250 hours of community service.

She did her time (sort of), got a much better deal than the other actress involved, Lori Loughlin, who is reportedly kicking herself for not admitting guilt and taking a plea deal. So, does Huffman really deserve to be ridiculed in a podcast?

Apparently so. 14 Days With Felicity, produced by At Will Media & Animal Kingdom and presented by Forever Dog, was released Oct. 29. It's a satirical podcast, scripted with comedians playing the roles, and is meant to represent the 14 days that Huffman was supposed to be in prison.

A news release describes it best: "Listeners will follow Felicity's two weeks behind bars via the cellphone she has smuggled into prison with her. Through phone conversations (strategy calls with her agent and manager: 'We're gonna Orange-Is-the-New-Black this!'), voice memos (notes for the memoir that will be her big comeback) and voicemails (her lawyer repeatedly telling her to please get rid of her phone), we will listen along as Felicity desperately tries to keep it together. We'll hear from her esteemed husband William H. Macy, her mortified daughters, Sophia and Georgia, and a whole host of familiar figures ranging from Martha Stewart to Lindsay Lohan. With two weeks and nothing to do but reflect, 14 Days with Felicity is a car crash in audio form, as Ms. Huffman strives to do her time, learn a thing or two and leave prison as a better woman."

• Urge to Kill, out today from KGW-TV in Portland, Ore., and VAULT Studios, looks at the case of 23-year-old Kaylee Sawyer, who disappeared from downtown Bend, Ore., in the middle of the night in July 2016. She was brutally raped and murdered, and the podcast follows how the killing shook up residents of a small town, especially when more women who were terrorized come forward. Listen to the trailer: arkansasonline.com/115urge/

• Book of Basketball 2.0 is a podcast by Bill Simmons, who wrote a best-selling book on basketball in 2009. He says he didn't want to write another one, so this podcast will have to suffice. It launches today and is described by theringer.com: "Playing off the NBA's dramatic changes during the past decade, Bill uses new commentary and fresh interviews with players and top media members to determine how the league has evolved and where it's headed. The trailer is here: arkansasonline.com/115basketball/

• This Is California, new from The Los Angeles Times: If you're from there and missing the Golden State, this series from Times reporters tells stories about California and the West. Here's the trailer: arkansasonline.com/115california/

• Legit Check, hosted by Yeezy Busta, takes on the wild world of sneaker culture, for all the "sneakerheads" out there. It debuted Wednesday, and a new episode is released each Wednesday. Apparently, Busta is an internet sneaker star, and he's teamed up with Premiere Networks and Dr. Dave Creative Entertainment for the iHeartPodcast Network.

According to insideradio.com, "Busta will speak with celebrities, musicians, comedians, athletes and other sneaker enthusiasts about the state of sneaker culture — where it's going, the people who influence it, the latest trends and its effect on music."

Busta has more 800,000 social media followers and more than 32 million views on his YouTube channel. How many pairs of sneakers do you have? Are they legit? Check it out here: arkansasonline.com/115legit/

• We Don't Deserve Dogs, hosted by Dr. Lisa Lippman, a veterinarian known from Instagram, and her comedian beau Richie Redding. Launched Monday, the interview show will feature comedians, actors and authors talking about their pets. The trailer is here: arkansasonline.com/115dogs/

• Autopsy: The Last Hours of..., launched Wednesday, is from REELZ, the company that brought you Murder Made Me Famous. The REELZ website describes the first episode, on actor Dirty Dancing actor Patrick Swayze: "The dancer and actor, probably best known for his roles in Dirty Dancing, Ghost and Point Break died almost unrecognizable at his ranch in California at just 57 years old. Now, forensic pathologist Dr. Michael Hunter will examine Patrick's extensive medical records to unravel the truth surrounding his death and will attempt to reveal what really happened to this huge star." This week, comedian Chris Farley's death is investigated. Here's the trailer: arkansasonline.com/115autopsy/

• The Only Podcast Left — Daybreak, from the power team of Netflix and Spotify, launches Thursday. The Podcast Business Journal reports that the podcast will branch off from season one of the Netflix series to tell the story of a group of teens who make a podcast during an apocalypse. Will there really be podcasting during an apocalypse? Apparently, on the Netflix show they also play video games, so maybe an apocalypse isn't all that bad? Sigh. Until Dec. 12, you can only listen on Spotify, then it will be available on other platforms. Listen to the trailer at arkansasonline.com/115daybreak/

N.M. sent an email this week to share his favorite podcasts. What are yours? Please email suggestions to [email protected]

Here's what N.M. is listening to:

• The Larry Miller Show: "Quirky and great to go to sleep with."

• Hog Pod with Bo Mattingly: "Well done and usually interesting. The one on Norm DeBriyn and Razorback baseball is fascinating."

• Cocaine and Rhinestones: The History of Country Music: "This is fabulous. If you love the Dolly Parton series, you'll love this. It's a must listen!"