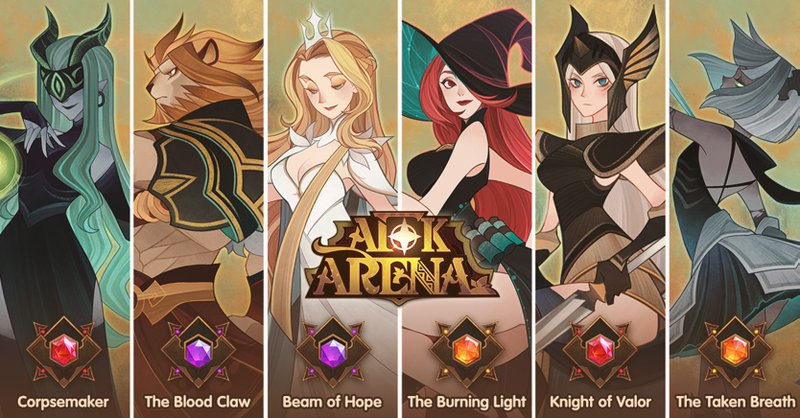 Are you too busy to play mobile games? AFK Arena, a role-playing game that will play itself for you, 24 hours a day, wants you to know that it's here for you.

AFK Arena is what we in the gaming industry call an "idler." That's a step up (or down, depending on how you view it) from "clicker" games, which simply require that you click on the screen repeatedly, as quickly as you can, to advance the game.

Not ready for that kind of commitment? Idlers go that extra mile so that all you have to do is wait while your heroes level up and earn fancy new equipment. While you're at work, the gym, in bed or even playing other games, your hero units in AFK Arena are fighting and getting stronger.

AFK Arena (AFK being an old-school internet acronym for "away from keyboard") was developed by Shanghai-based Lilith Games. A game I reviewed here earlier, Rise of Kingdoms, was also created by Lilith Games, and I critiqued it for being very cash grabby in a way that made being a free-to-play game — aka F2P player — a fairly sour experience. While AFK Arena is also eager (perhaps even a tad desperate) to get players to open their wallets, I'm happy to say that it's a pretty OK game even for people who don't spend a dime.

Boasting many traditional role-playing elements, AFK Arena does have an actual storyline — something about stopping a demon from destroying the world. The story is a bit secondary to the mechanics of the game, which is a shame. There are more than 40 hero units from six factions, and every unit has its own fairly fleshed-out backstory. There is also lots of detailed art, the style of which makes me think of fairy-tale picture books, and it's exquisite.

Unfortunately, it's hard to get invested in the storyline when it's doled out so piecemeal over weeks and months, and by then I've mostly forgotten why my heroes are fighting.

The various factions work in a sort of rock-paper-scissors fashion. Each faction is strong versus one and weak against another, and building your five-unit team around a particular faction can yield combat bonuses.

Combat is not strategic, though, outside of choosing the hero, faction and unit position. Combat itself plays out automatically, although special skills that charge up over time can be manually activated.

So how does one play a game that plays itself? Matter of fact, there's quite a bit to actively do in AFK Arena. There's a main storyline to progress through, divided up into chapters. The further one gets into the storyline, the harder it becomes. To keep moving forward, heroes must level up, which requires magic dust and experience points, things that are earned over time, while doing nothing.

The game will store up to 12 hours of AFK rewards at a time, meaning that logging in just a couple times a day is all that's really needed to continually advance. There are also a special labyrinth to explore every two days, guild events, daily and weekly quests to complete, a ranked-combat tower where you battle against other players' teams and limited-time events, all of which give rewards of gold, experience, items and more.

What's it take to complete all that? Maybe 20 to 30 minutes a day. It's all optional, but one of the main rewards of completing the daily tasks is the chance to earn the game's premium currency, Diamonds. Diamonds are used to summon new heroes, and because of the way the game's leveling system works, eventually players will need multiple copies of lots of different hero units to keep advancing and getting stronger.

In standard gacha-game fashion, fusing multiple copies of heroes together will raise a unit's maximum level, and it takes a lot of summoned hero units to reach the highest ranks.

In the beginning, Diamonds flow like manna from the heavens, letting players quickly build up a strong stable of heroes by completing one-time quests. Then it slows down, but I've found that the game still sufficiently rewards F2P players (who aren't buying their way through the game), doling out enough Diamonds to keep continually progressing.

For the impatient, game advancement is as close as your credit card, and the game makes continual offers of special discounts, limited-time deals and game enhancements to tempt would-be wallet warriors.

It's OK to resist that temptation. Lilith Games is bringing in tens of millions of dollars a month with its games, according to an April news release. Overall, AFK Arena fills its niche role of being a role-playing-theme game that requires very little in the way of time commitments and is sufficiently rewarding, even to F2P players, to keep them coming back for more each day.