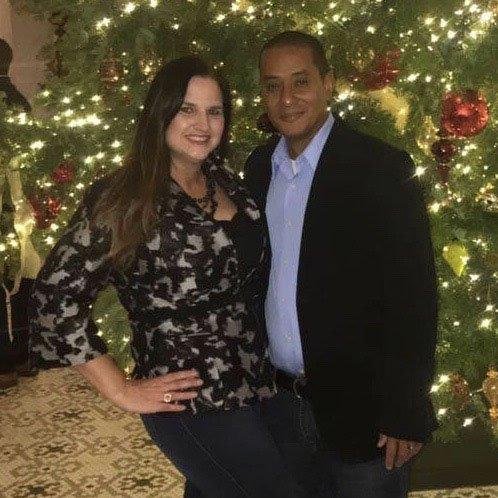 Holly Harris and Julian Jones were introduced by friends in 1999, but Holly wasn’t interested in being set up. She realized on her own that he was the kind of guy who would always be there when she needed him. “He sat by me all night with his arms around me trying to keep me warm,” she says. “I knew he was just really a good guy.”

Holly Harris' friends wanted her to go out with Julian Jones, which is exactly why she didn't want to spend any time with him -- until she did.

Her friends knew she would be opposed to a setup, so they didn't tell her until they were in the car, on the way to a club, that they had arranged for Julian to meet them there. As they expected, she balked.

She says: “I thought he was cute.”

He says: “I thought she had some of the prettiest eyes.”

She says: “I remember seeing Julian at the end of the aisle and he was wearing a tuxedo, but he was in a military stance — he was at attention, like it was official for him.”

He says: “I was nervous and I remember seeing Holly walking down the aisle and the music was playing, and I was just mesmerized by her.”

My advice for a long happy marriage is:

She says: “You need to be friends first. Julian is my best friend. We do everything together and we talk about everything. You have to like each other.”

He says: “You have to have a strong foundation in, I feel, Christianity. And you have to communicate. If you don’t communicate your marriage won’t last. To have a successful marriage you have to put your spouse before yourself.”

"He tells this story about how he was trying to dance with me and he turned around and I was gone," she laughs.

Julian was good-natured about it. He knew they were being set up, but he quickly abandoned the idea of them becoming a couple.

"I was thinking, 'Well, my dancing probably wasn't the greatest, so maybe she was embarrassed of me,'" he says.

A couple of months passed and as New Year's Eve 1999 approached, Holly and her friends -- and Julian and his friends -- made plans to celebrate in New Orleans.

"It was Y2K -- you know, the year everything was going to blow up. We thought, 'I guess if we were all going to die, let's die in New Orleans,'" she quips. "I went with my friends, and he went with his friends. But our friends were friends, so it was just a big group of us."

New Year's Eve day was warm and Holly wore a sheer, festive top as they explored the city.

"But then at night, the temperature dropped, and it was really cold," she says.

The group went to a New Year's Eve party that evening, and she was unprepared.

"I was freezing, and Julian sat by me all night, on a couch, with his arms around me trying to keep me warm," she says. "We didn't dance -- we didn't do anything other than just sit there because I was so miserable."

Holly's thoughts that night were strictly on the temperature, but the next day, when she was warm again, her thoughts turned to Julian.

"I thought he was a really good guy," she says. "He didn't try anything, he just kept me warm. It was just very sweet. But he went home that day, and I stayed an extra night. So I didn't see him then."

Julian had made the trip so he could dance the night away, but he had no ulterior motive when he stayed close to Holly.

"I was leaving the next day and my intent was just that she was cold and I was trying to warm her up," he says. "I guess I didn't want to leave her stranded."

Holly got Julian's number from his brother on the ride back to Little Rock and called him when she was back home.

They went to lunch together and saw a movie for their first date.

"We've been together ever since," Holly says. "I remember talking to a friend after Julian and I had only just gone out a few times, and I said, 'I'm going to marry him.'"

Holly had been teaching when two jets crashed into the World Trade Center; Julian was in the Army Reserves then.

"I didn't know if he was going to be deployed, and I had a friend flying in for the wedding and everyone was afraid to fly ... it was a very scary time," she says.

They had bought a new house instead of paying for a honeymoon, so they stayed at the Capital Hotel on their wedding night and spent time with family and friends who were in town for the wedding.

Holly says a few of her friends tossed out I-told-you-so's after she and Julian started dating, but she didn't mind.

Julian says he needed Holly, too.

"I had prayed for Holly because I had been through some really bad relationships," Julian says. "I prayed for somebody who appreciated me for who I am, who would be OK with my flaws and would still love me."

"I had prayed, too, for somebody who would really love me," Holly says. "Maybe that's why I was resistant because I didn't want to force things. I felt like if God was going to send somebody it would come naturally."

Holly has two adult children from a previous marriage -- Jordan Harris and Jessica Harris -- and she and Julian have two children, Kaleigh, 15, and Kaden, 10.

Julian wasn't deployed right after he and Holly were married, but he was called up in 2007 during Iraqi Freedom and was injured during a rocket attack.

Even through all the stress, Holly says, the traits that first made her fall in love with him remain.

"He's a caregiver. He's just a caring person," she says. "He will take care of you and make sure you're OK or that something makes you happy. That's who Julian is." 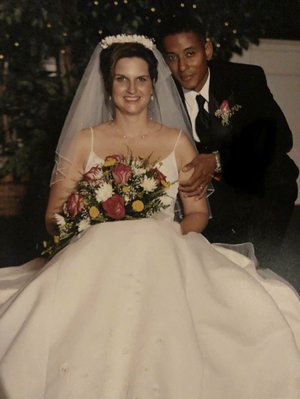 Photo by Special to the Democrat-Gazette
Holly and Julian Jones exchanged their vows on Sept. 22, 2001. “I had prayed for Holly because I had been through some really bad relationships,” Julian says. “I prayed for somebody who appreciated me for who I am, who would be OK with my flaws and would still love me.”